My last “expedition” resulted in a successful assault of Mt Sopris well back last October. I checked the NOAA web page and noted the 30-40% chance of T-storms after noon, light winds (5-10 mph), and a high of 71 degrees. My plans had been to wait well into summer before attempting my first climb/hike of 2013. Heavy snows late in the winter/early spring resulted in standing snows all along the Boulder, CO Front Range/Indian Peaks well through June and into July. Thus, it was time and I say “about time” for me to “get-to-going” again and bag a 13’er or two.

My alarm broke the deep sleep I was in right at 3:00am as scheduled and since I’d laid-out all my gear the night before the transition from sleep to ready-to-go went smoothly and I was on the road at 3:56am. Warm/hot weather was the norm and this morning was no different; 67 degrees at 4:00am; I truly love summer and always will!!. Headed out of Louisville via Cherry St & McCaslin to route 128 where I turned right and headed west then turned left on route 93 all the way to Golden where I then turned right on route 6 and up through the canyon to west on I-70. The traffic heading west was non-existent. Dawn was breaking as I passed Georgetown Lake the water surface was like a mirror with zero wind and I anticipated a perfect day for my quest; a possible trifecta of Crystal, Pacific and Atlantic Peaks. I drove up through the Eisenhower Tunnel, down the other side, all through Frisco and exited at Route 91 heading towards Leadville.

After about 6-7 miles I turned left and found three cars were at the Mayflower Gulch TH; without stopping I made my way past the parking lot and up the old mining road all the way to the green gate blocking my advance outside the old Boston Mine site complete with broken log buildings from a bygone era. The day was blue and being on the west side I would wait for a good while before the sun broke over the high peaks standing directly before me. I stood outside looking for any reference to a trail or path and found nothing. I then drove back about 1/3 of a mile and found a small turn-off where I parked and chocked the wheels for safe/secure reasons and observed a large doe and then a large buck whitetail nosing through the willows and losing the sight of me as they didn’t startled but simply walked away………..All quiet on this western approach. Nice.

No sooner was I out of my truck then the mosquitoes zoomed-in for a bite and the fact that I didn’t have enough hands to swat them all brought buzzy, relentless attack without mercy. They were large and hungry and wanted me bad as I readied my pack applied sun screen and started up as fast as I could manage. Although I wasn’t certain how to go I knew where to go and started across the willows and across Mayflower Creek and up the cut before me and up along Pacific Creek. I outran the “skeeters” and found myself bush-whacking up through the Pacific Creek cut with soft/soggy conditions near the creek with lots of low willows and heavy/steep forest all-around. My advance went well in spite of not ever finding a trail and to keep things simple I went as the creek went and soon exited above tree line and out into lushly flowered hillsides, then up and over out to where I could see where I was. 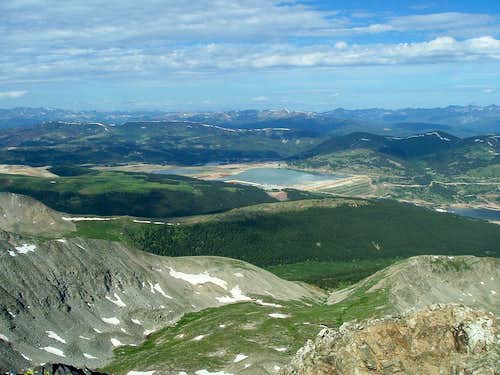 Pacific Creek drainage/gully & Climax Mines tailings ponds in background
Turns-out I had followed Pacific Creek just about to its source and before me stood the West Ridge of Pacific and well left and beyond was Crystal Peak. I’d gotten a bit of a late start (6:13am) and to now find the route for the saddle between Crystal and Pacific Peaks was now far left and another 40-50-mins away brought about an immediate change in plans; first Pacific, then Atlantic and back to my truck. Plan B was A-OK with me as the approach was right in front of me and Pacific Peak shown high via a high/steep/rocky/crumbly ridge and I was on my way without hesitation. Two peaks instead of three was fine and with all systems go I started up the west ridge with my goals standing tall right in front of me and the view of the connecting saddle between Pacific & Atlantic seemed only moments away……..Dream-on.

Up the ridge I went and proceeded right up the ridge line as there was no trail that I could find. My advance was good and I paused as often as I needed for a blow and some water as this ridge had a very direct appearance while offering a very convoluted/ zig-zaggy advance with loose/crumbly rock and a handhold as best you could find. I scrambled along this ridge with my goals in sight the entire way; staying right of the ridge, on top of the ridge just left of the ridge was my route and although I couldn’t find a trail or cairns I was climbing ever higher and closer to the summit. High snows now blocked my right side and I climbed under, over and around these drippy melts as the day remained quite warm and the sun was now cresting directly over the top of Pacific Peak as every time I looked at the summit I was greeted with bright sun directly in my eyes.

I found this West Ridge to be both challenging and in places quite exposed. Testing hand and foot holds was a must as a bad move would have held dire consequences. I took my time and gauged my elevation by looking over at Atlantic Peak versus looking up ahead and straight into the rising sun. Before too long I routed myself around some more melting snows, through more exposure and now found the crux of the ridge near the top at the distinctive/signature notch where I plotted a safe course down and across and was soon up and finally on top of an empty summit right at 9:09am. I’d made it!! 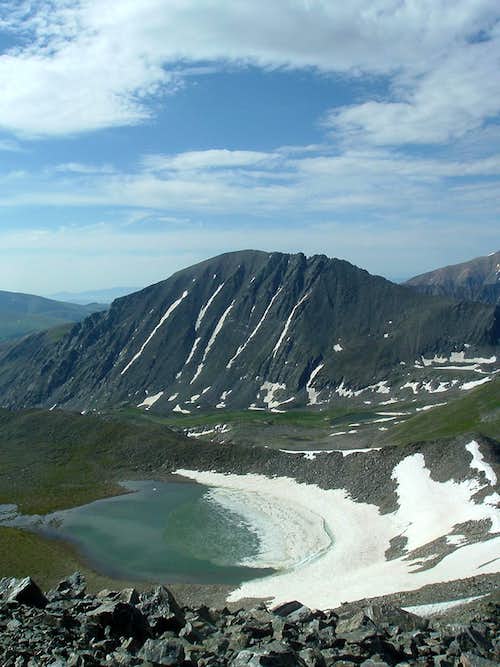 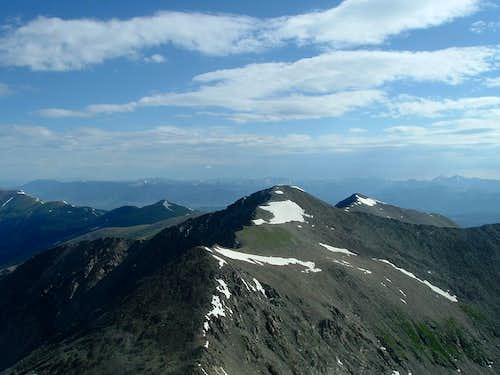 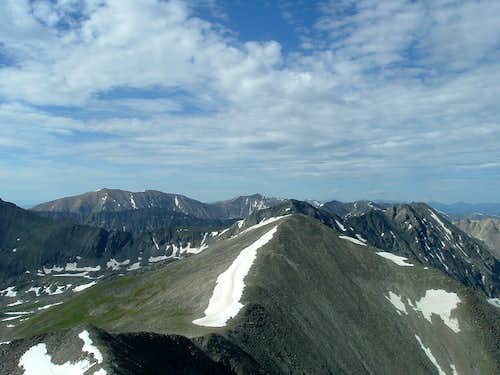 Atlantic Peak, Fletcher Mtn & Drift Peak
Farther off were Grays & Torreys Peaks, Lincoln, Cameron, Democrat and countless others as the weather remained most favorable with a slight cooling breeze, blue skies overhead and clouds building out of the west. I removed my pack and looked for a summit registry but found nothing, so I settled-in and took some photos, ate some snacks and drank a good amount of Gatorade as I still had a long ways to go before getting back down to my truck. After a good breather and a bit more food and drink I started down a cobbly/broken rock descent heading for the saddle between Pacific and Atlantic Peaks right at 9:23am 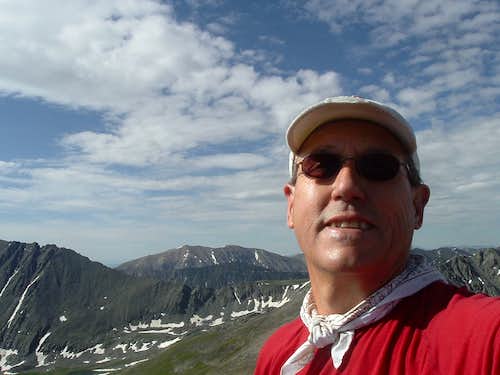 Now over to Atlantic Peak via the connecting ridgeline/saddle……………My first alpine climb of 2013 this fine Colorado morning and another centennial 13er, sweet!! More to come.