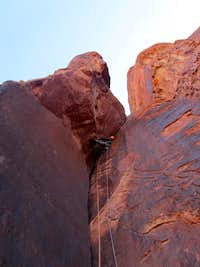 Padre Canyon is located within the Red Cliffs Desert Reserve near Ivins (St. George), Utah. The reserve is managed as a Habitat Conservation Plan administered by Washington County in coordination with the Bureau of Land Management (BLM), United States Fish and Wildlife Service, Utah Department of Natural Resources and the State of Utah School and Institutional Trust Lands Administration. The reserve began in 1996 and in 2009 received designation as a National Conservation Area, similar to Red Rock, Nevada. Within this relatively new National Conservation Area, Padre Canyon is included mores specifically within the Red Mountain Wilderness area. Mule deer, mountain lion, bobcats, jackrabbits and fox are the more commonly observed mammals of this wilderness area. However, it is several reptile, fish, bird and native plant species that drive the protection of this land; the Mojave Desert Tortoise being a critical component of that vision. One of the richest populations of these tortoises can be found between my home located along the edge of the reserve and the climbing routes we have established along the eastern cliffs of Padre Canyon. Please respect the established trail system through this area. It is heavily monitored for potential abuses.

The best access to the Padre Canyon climbs is to park at the southeast corner of Tuacahn High School and Theater in Ivins, UT. Tuacahn High School is a Utah charter school for the performing arts. It is a public school that would rival any private school in the United States. To reach the school, you are driving back to an incredible natural amphitheater. Due to the theater, parking is open to the public. From the southeast corner of the large parking lot, locate a trail that descends into the wash and immediately up the other bank. Cross a well-traveled running/hiking trail and locate a bushy, sandy and loose climbers trail up a rib of sand that breaks through the chossy lower cliff band. Once you gain the base of the steep climbing walls above, head southeast along the walls until you are below an obvious “lightning bolt” crack (left to right). We named this route Stigmata. Just to the right is an obvious 70’ tall shallow chimney, this is the Friar. Continue on as stated in the second paragraph above and you find Frisco, which has one of the best (and worst) pitches on the entire wall. Continue east for Assisi and Francesco. 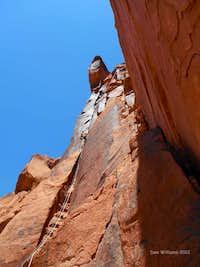 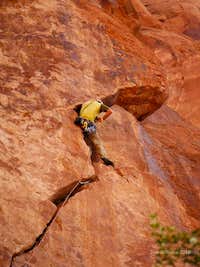 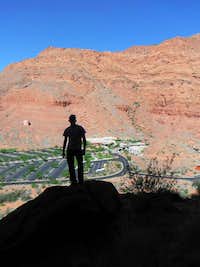 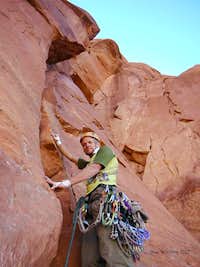 isted in direction of West to East.

Stigmata was the first crack line Joe Allen and I established in Padre Canyon in 2012. Most of the routes we have established in Padre Canyon are pure crack lines with little to no fixed protection. It is/was our intent to make this area as pure of a trad climbing experience as possible. By doing this, our “rack call” on many of these routes is quite large if you want to protect them well and Stigmata is no exception. I led the route via the FA on site with a single C4 #5 and #6, but suggest double through that size for the arcing off-width on the second pitch to avoid the need to walk cams. Both pitches of Stigmata can be rapped with a single 60m rope via fixed stations. Stigmata has some potential for expansion via a deep varnished chimney that can be reached via a walk north along a broad bushy ledge from the top of the second pitch.  Dow

The Friar is a two pitch route located just to the right of Stigmata, which is the first route we established in Padre Canyon. Friar was the third route we put in on this wall and an obvious choice. When I originally walked below the line, the feature I was excited about was what looked to be a stem box up the first pitch with a hand crack roof pull. However once I got into it on the FA, it was quickly apparent that this shallow chimney involved easier climbing therefore not necessitating a lot in the way of stemming. The exit to the wide crack above provides a little air, but it is via relatively mellow moves on good ledges. Exiting the chimney and up a meter or two is where we placed the only bolt to assist with that belay. The wider crack above leads into a typical feature for this wall: an overhanging wide crack forming a roof out right. The climbing is fairly mellow and the only move that is 5.10 is towards the end of the pitch on a bit of chossy rock, up a wide crack to a reachy pull. The route ends in a deep seated shaded chimney of choss sandstone with a wall void of cracks but full of huge huecos looming above. We slung an arch feature versus drilling any bolts for the top rappel (only rappel needed with double ropes). Thus we only placed one bolt on the entire route; at the first belay station. Dow

Frisco is a two pitch route located just to the right of Stigmata and the Friar, which are the first routes we established in Padre Canyon. Frisco is best located by continuing east along the cliff whilst looking back at the upper reaches within just minutes of leaving the other two routes. A beautiful black varnished wall with an overhung wide crack up to a roof comes into view. Our first fixed rap can be located at the lower left of that wall. The first pitch is a chossy wide piece of crap that you would normally ignore when establishing routes if it did not lead to this upper wall. I might add a bolt or two in the future on this first pitch, but right now it is a dirty wide crack made up of precarious rock. Dow

Assisi was the fifth multi pitch route Joe Allen and I established in Padre Canyon in 2012. We placed zero pro bolts and only two rap bolts for one two rope rappel. It is as aesthetic as any of the others crack routes we established in Padre and caught our eye the first time we passed below it. The first pitch is a true fingers-hands splitter up an otherwise crack-void wall spackled with several large huecos. The second pitch has a fun pull through, over a bulge, on a hands crack which continues for another 30’ but eventually gives way to a broken chimney system to the far right that leads to the flat summit of this wall. The climbing of the first pitch is approximately 100’ and the second approximately 130’, but the second pitch is an angled one allowing for one double rope rap from the summit of this wall. We set up a rap just below the summit of the wall that allows for a full 200’ clean rap to the ground, just west of the first pitch. Dow

Joe Allen and I established Francesco in 2012. Most of the routes we established in Padre Canyon are multi-pitch pure crack lines with little to no fixed protection. It is/was our intent to make this area as pure of a trad climbing experience as possible. By doing this, our “rack call” on many of these routes is quite large if one wants to protect them well. Francesco is no exception in its ability to accept gear, however, we did place two pro bolts at a fragile transition between cracks systems on the crux (3rd) pitch. I led this section on the FA, on-site, without them. With these two bolts, the entire route protects well. The rap anchors at the top of the route are out right; double ropes required to the top of the first pitch and a single rope rap to the ground from there. There is a cool tunnel at top which serves as a shaded belay if in need. To summit this section of the cliff, go through the tunnel and scramble up left for great views. Dow

Despite the first and third pitches of Who’s Your Daddy being your typical choss, the 2nd pitch is so grand as to more than make up for it.  The gear call on Mountain Project would leave you to believe that this magnificent corner is tight hands, but in reality it is tips to fingers for a solid portion.  The flaring corner to an awkward roof pull at the end adds extra excitement to be sure.  This is a great hike with a rewarding trad pitch and a walk-off descent. Dow