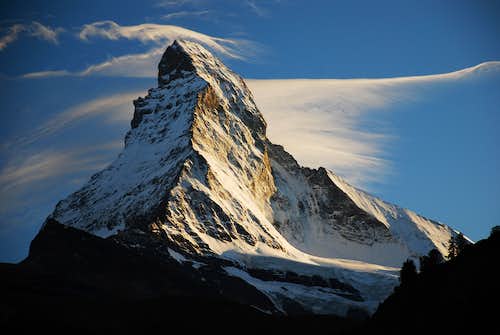 The classic view from Zermatt (NE). Photo by Fabioberni 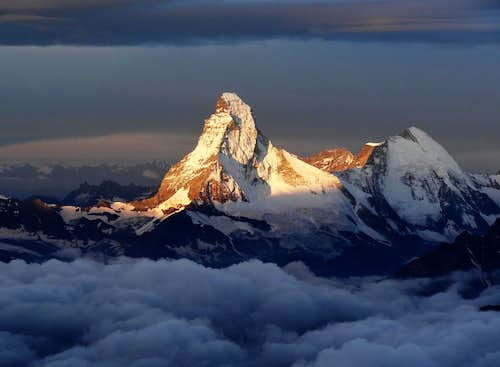 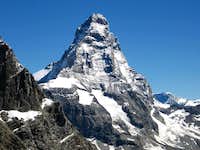 The Matterhorn. Say the word and for most climbers and even many nonclimbers a vision of the mountain appears. It is without doubt one of the most famous mountains on earth. The history of the Matterhorn and the amount of material available regarding the mountain is so vast that any attempt to cover it all on a simple web page is futile. Many books have been written and photo books published about the mountain and its history. Yet, this magnificent mountain must be represented to some degree on Summitpost. This page should give Summitpost members and visitors an overview of the mountain and an opportunity to share personal experiences and photos. The uniqueness of the Matterhorn is perhaps best described by Gaston Rébuffat in his classic book MEN AND THE MATTERHORN. A quote from page 20: "I was born by the sea, and up to the age of twelve I had never been outside my native Province; and yet, without being aware of it, I knew the Matterhorn. I did not know it by name, but I knew it. When, by chance, someone in my family uttered the word 'peak', and my small child's imagination created the corresponding picture, I saw a pyramid, beautiful as an arrow of stone, pointing towards the sky. At school, at the very outset, when the master was teaching us how to hold a pencil and to amuse us, would say, 'Now, draw a house, a tree, a flower, a boat, a mountain,' all of us without knowing or intending it, would draw Matterhorns. Later, in the Alps, in the Himalayas, in the Rockies, on the Hoggar, I have been up countless valleys to discover mountains of all shapes and heights, but have never come across any like the Matterhorn I have questioned climbers of all countries who have visited even more of the world's mountains than I have. They have never seen a mountain to compare with the Matterhorn either. Moreover, on reflection, no one arriving at Zermatt or coming up from Châtillon to Breuil has ever exclaimed on seeing the Matterhorn for the first time, 'It looks like such and such a mountain', even a mountain wearing the halo of the Himalayas. Besides, this statement does not ring true, it is so clearly impossible. 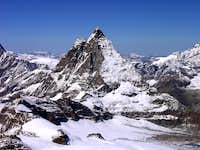 From the SE. View down on Théodule Pass

Sir Arnold Lunn includes an extensive discussion of the names for this mountain in Matterhorn Centenary, 1965. He relies heavily on the work Dr. Jules Guex a Swiss who is an expert on Alpine nomenclature. Matterhorn, the Swiss name, is derived from the Swiss word matte, meaning "meadow". It means "mountain or peak of the meadows". It is interesting to note that that according to Lund: "The climate of Zermatt has changed radically since the middle of the eighteenth century, when the alpine pastures of Zermatt and Valtounanche met on the Théodule and a bridle path led from Zermatt to Breuil." Thus at the time that the name evolved, the mountain rose above meadows extending to its base rather than the snow and ice that is present today. Monte Cervino (Italian) and Mont Cervin (French) is, according to Dr. Guex, in fact a misspelling of the original local name of Servin. The misspelling came into being and common usage through the writings of Horace Bénédict de Saussure (first climber of Mont Blanc) who crossed Théodule Pass from Brueil to Zermatt and wrote of the trip in his book Voyages dans les Alpes. He misspelled the name there and the new spelling stuck. Servin is derived from a word meaning "wood" and would indicate forested slopes. The name originally belonged to the pass and was later applied to the mountain. This would seem to indicate that at one time the Théodule Pass was forested. 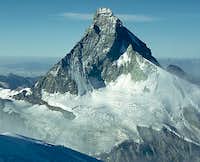 Each of the four faces of the Matterhorn has multiple routes. The routes are all difficult affairs with a great deal of danger from rockfall. The East Face has been descended on skis from the level of the shoulder.

There are four main ridges on the Matterhorn. The Hörnligrat is the northeast ridge. It was the route of the first ascent and is considered to be the easiest route to the summit. The Italian Ridge or Liongrat is the southwest ridge. It was the route of the second ascent and is considered to be slightly harder than the Hörnligrat, but has far more fixed ropes making it perhaps easier. The Zmuttgrat is the northwest ridge. It is the longest ridge on the mountain. It is known as a fabulous route, but because of its northern exposure it is frequently out of condition. The Furggengrat is the southeast ridge. It is extremely difficult and not frequently climbed. 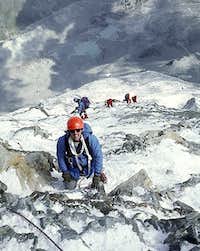 Just below the summit. Hörnligrat

Upon viewing the Matterhorn, both climbers and nonclimbers alike are usually overwhelmed with a desire to climb it. For the truly experienced alpinist an ascent of the Hörnligrat or Liongrat in good conditions is not difficult compared to some of the classic technical climbs of the Alps. You must be confident and competent at route finding, climbing UIAA II (Class 4) moving together or unroped, and climbing rock and mixed terrain in crampons both up and down. The climb is dangerous due to rock fall and the fact that you are frequently climbing unbelayed or unroped in positions where a fall would certainly be fatal. A change in the weather with the addition of water, snow, or ice - especially if combined with poor visibility - can quickly change even the easiest route from a pleasant outing to a life and death struggle. If you are planning an ascent of the Matterhorn, do your research and know your personal limits. The trip reports here (see sidebar) offer some insight into what the mountain can be like and there is much information on the Internet. It is also interesting to read the prerequisites placed on clients by the professional guides (see the links below). Remember that many writers boost their egos by trivializing difficulties. An ascent of the Hörnligrat (the easiest route) is not a simple undertaking. Unguided parties can expect a 12 to 14 hour round trip. For those who do not feel that they have the experience and skill to climb the mountain on their own, there is the option of taking a guide. This is an expensive option since most of the guide services not only charge a high fee (Zermatt guides - 1380 CHF) for the Matterhorn, but also require up to two climbs with them prior to doing the Matterhorn. Experiences with guides especially on the Matterhorn get mixed reviews. Do your research and make your own decision.

The following links are for the major Zermatt and Breuil–Cervinia services as well as an independent guide service. This is not an endorsement of any – just links to make starting your research easier. Zermatt Guides Breuil–Cervina Guides Cosley & Houston Guides

There are over 25 routes and variations on the Matterhorn. Most ascents are via the Hörnligrat or Liongrat with the Zmuttgrat a distant third. Not because the Zmutt is not a great route, but because it is frequently out of condition due to its north facing aspect. In fact because it is more difficult and not equipped with any fixed ropes, the Zmuttgrat is a preferable route for many. Listed below are the more popular and famous routes. Note that the difficulty assigned to the routes varies slightly from guidebook to guidebook. See guidebooks, the attached SP route pages and the external links for more details. Searches on the Internet bring up many pages. Hörnligrat: Normal Route from the Swiss side. Hörnligrat SP Route Page Difficulty: AD- with places of III- (up to IV+ near the fixed ropes if they are not used). 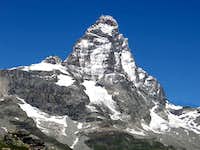 SWISS SIDE Access to the Matterhorn from the Swiss side is from Zermatt, a major mountain resort. Public transportation via train or bus then train is easy to arrange. Apparently one can even arrange to arrive by helicopter. Private cars are not allowed in Zermatt. If you are traveling by car, the closest that you can get is Täsch from which you must travel by train. There is ample parking in Täsch. From Zermatt, you can use a combination of lifts and hiking or hike directly from the village to the mountain. 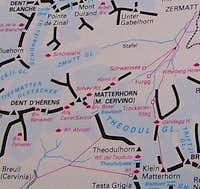 ITALIAN SIDE Access from the Italian side is from Breuil – Cervinia also a major mountain resort. Public transportation is easy to arrange or you can arrive by car. From the village, hike or take a small taxi service to the Duca degli Abruzzi (Orionde) Hut / Inn (starting point of the Liongrat) and lift and trail access to other points and huts at the base of the mountain.

Valley Bases Both Zermatt and Breuil – Cervinia are major mountain resorts with abundant lodging of all types and price ranges. Huts 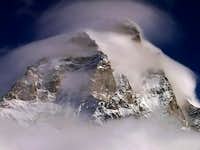 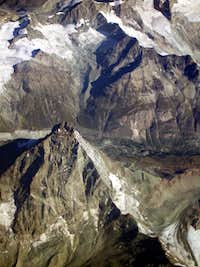 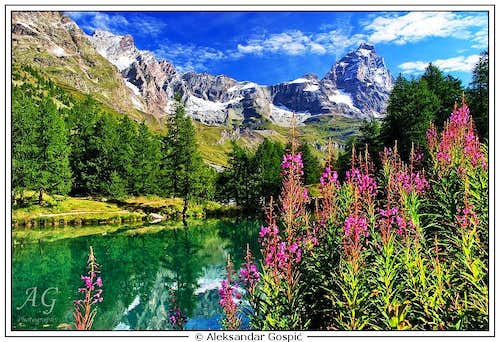 This photo of the peak of Matterhorn was taken from a plane (click it to enlarge):

I've done both the OS on the Grand and the Matterhorn (liongrat-Hornli traverse) this year. I remember having the same questions! I would say the level of actual rock climbing was about the same on the both, but the Matterhorn just having more of it. I did the Grand in June and the Matterhorn in August. I was in better shape by August and had done a much better job acclimating (climbed blanc the week before the Matterhorn). With the grand I didn't acclimate other than arriving to the area the evening before we started up towards our stay at the lower saddle. I felt like up-chucking when I woke up but felt much better once I started getting the o2 moving through the system on our way up the grand. Then physically felt great at the summit of the Grand. The Matterhorn had multiple fixed "gym" ropes that we had to ascend. I remember feeling winded after several of those near the shoulder of the Matterhorn on the Italian side. Then heading down the Hornli I was fatigued a bit more versus the Tetons. Other than occasionally feeling winded, the Matterhorn climb allowed for lots of resting from the anerobic work on the ropes while we scrambled from pitch to pitch. I heard people say a few times in their trip reports that climbing the Matterhorn was the toughest thing they had done, but for me, I couldn't say that. My background is no prior mountaineering experience prior to this year. Never ran more than 8 miles in my life, hiked a bunch and could only do a around a 5-10a in the Rick climbing gym- so nothing special. I will say the exposed ridge on the summit of the Matterhorn was like nothing I had ever experienced. That was crazy! Awesome! My video for the climb on YouTube is here: https://m.youtube.com/watch?v=OY1NPe2LDRA send me a message of you have any more questions.