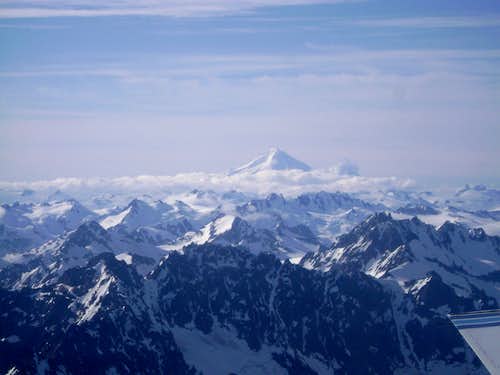 Mount Iliamna. At 10,016 feet, it is the second tallest mountain in both the Chigmit Mountains and the Aleutian Range. Mount Iliamna is a stratovolcano, and has had major eruptions in the past. Climbing the peak is a major undertaking, and requires a great deal of mountaineering experience.
The Aleutian Range is a large mountain range located in southwestern Alaska, stretching from the Cook Inlet to the end of the Aleutian Islands. It is part of the larger Aleutian Arc, which stretches all the way from Russia's Kamchatka Peninsula to the Gulf of Alaska. Much of the range is volcanic, due to its proximity to the subduction zone of the Pacific tectonic plate beneath the North American plate. During World War Two, several battles were fought in this range on the islands of Attu and Kiska. 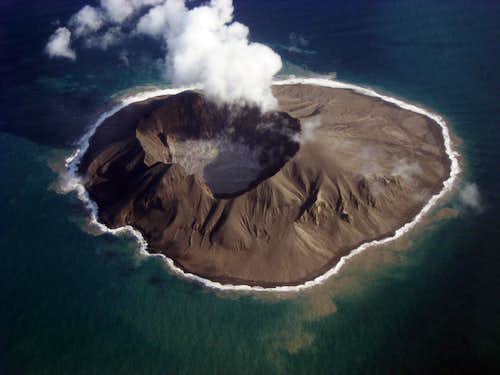 Kasatochi volcano erupting. It is one many volcanos in the Aleutian Islands. Image courtesy of Jerry Morris.

Map of the Aleutian Range. The range stretches for over a thousand miles in total length. Photo courtesy of the USGS Alaska Volcano Observatory.
The Aleutian Range contains many active volcanoes, some of which have had recent eruptions. Over the last two hundred years, over three-quarters of the volcanic eruptions in the United States have occurred in Alaska and the Aleutian Range.
One of the most active volcanoes in the range is Mount Redoubt. Eruptions from this volcano can produce enormous volumes of smoke and ash. Some eruptions are so massive that they disrupt air traffic and deposited ash as far away as Anchorage and beyond. In 1989, an ash cloud from Mount Redoubt caused a jet flying northeast of Anchorage to loose power and nearly crash. 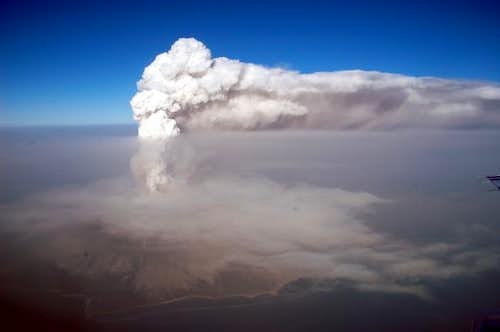 Augustine Volcano erupting. Mount Augustine is located on a small island of the coast of the Alaska Peninsula. Volcanic eruptions happen frequently in the Aleutians. Photographer: McGimsey, Game. Image courtesy of AVO/USGS. 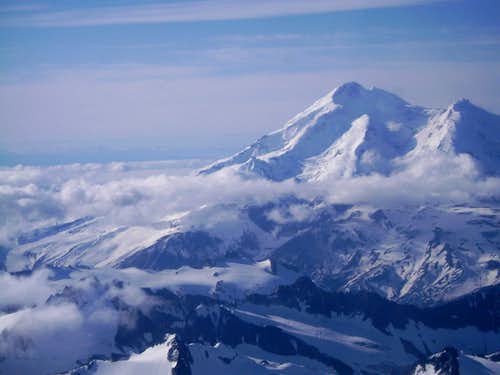 Mt Redoubt-10,197 feet tall. It is the highest point in both the Chigmit Mountains and the Aleutian Range
The tallest peak in the range is Mount Redoubt at 10,197 feet tall. It is an active stratovolcano covered in glaciers. Despite its modest elevation, climbing Mount Redoubt is a major endeavor, and is not to be taken lightly. The peak is extremely remote, and if you run into trouble rescue may be days away. Due to Mount Redoubt's close proximity to the coast, severe weather is a common occurrence. 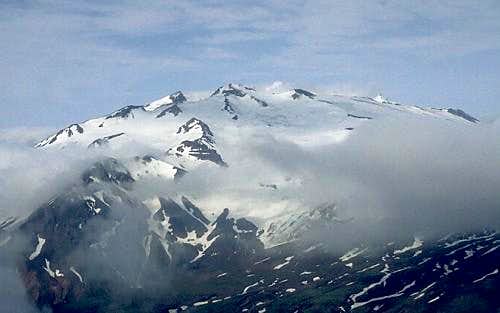 The 6679 ft tall Mashuskin Volcano. The volcano is covered by many glaciers, and is a significant peak to climb despite its modest elevation. A 6,000ft mountain in this range appears enourmous due to the vertical relief rising from sea level. Photo courtesy of SummitPost member cgclimber. 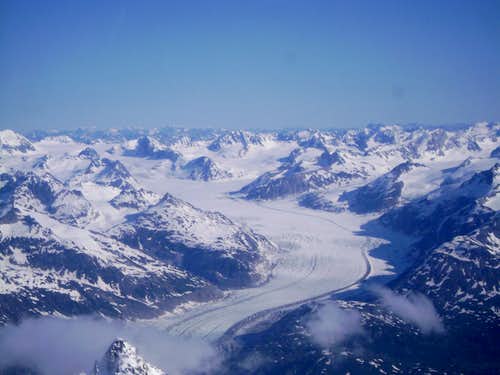 A large glacier in the Aleutian Range. Glacier travel is required in order to climb many of the high peaks in the Aleutian range.
Vast swathes of the range are covered in ice. Many glaciers exist within the range, some of which are several miles long. Innumerable lakes in the region receive most of their water from these glaciers, including Lake Iliamna(the largest lake in Alaska). Lake Iliamna and Lake Clark(located to the north of Lake Iliamna) are primary spawning locations for large populations of salmon.
Salmon fishing is a cornerstone of life for many of the natives of the region. There are almost no roads in the range and much of it is only accessible by boat or plane. Many of the peaks are extremely remote and require the services of a float or ski-equipped bush plane in order to access them. This requires a chartered flight or boat ride from either Anchorage or one of the villages that dot the region and range. 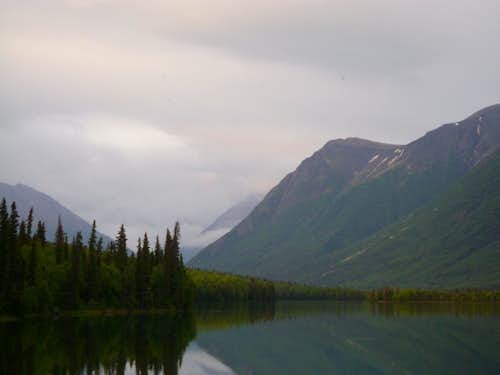 Many lakes exist within the Aleutian range. Most of the communities in the range are located near water 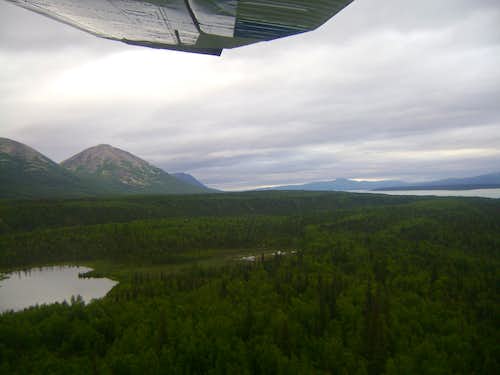 Flying into Kontrashibuna lake in the Chigmit mountains via floatplane.
The Aleutian Range has several sub-ranges:
The Volcanoes of the Aleutian Islands: 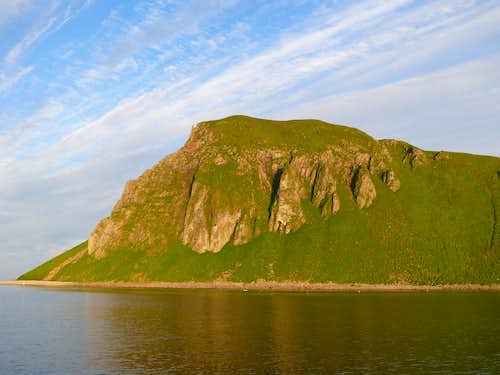 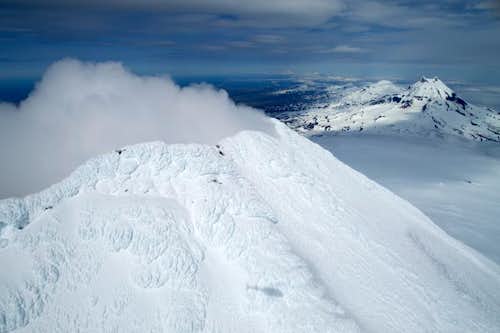 The Volcanos and Mountains of the Alaska Peninsula: 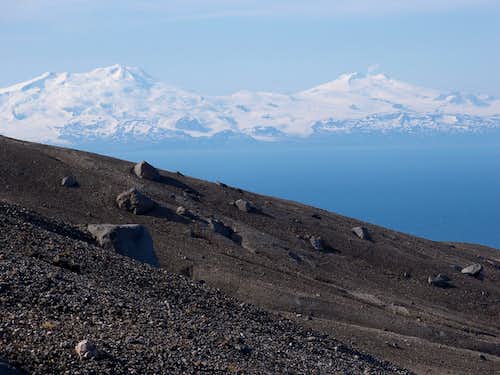 Mount Douglas, and Fourpeaked, volcanoes located in Katmai National Park. Douglas is dormant at the moment, but there have been eruptions from Fourpeaked as recently as 2006. Photo courtesy of SummitPost member Baarb. Info source: Global Volcanism Program. 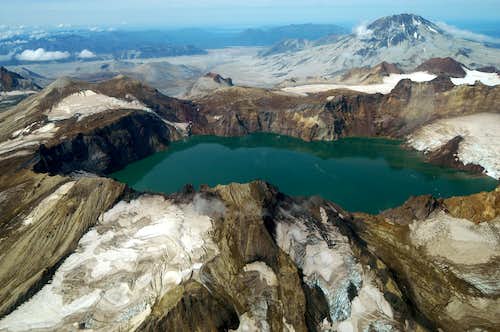 Mount Katmai, a volcano in Katmai National Park. The park is located in the Alaska Peninsula section of the Aleutian range. Aerial photo from NPS website, with permission. 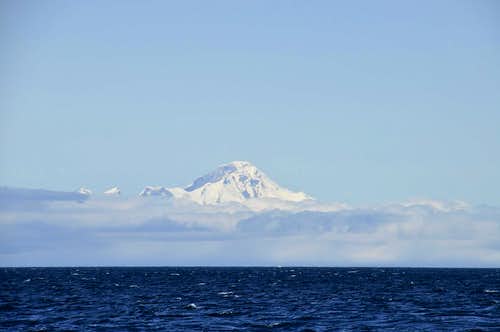 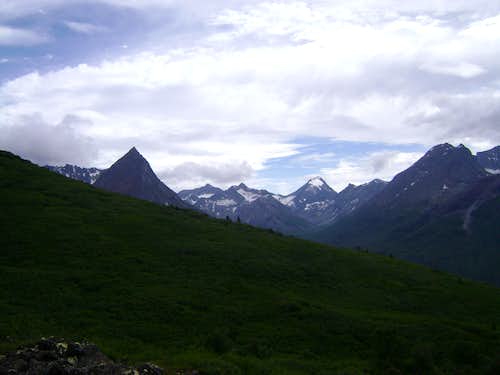 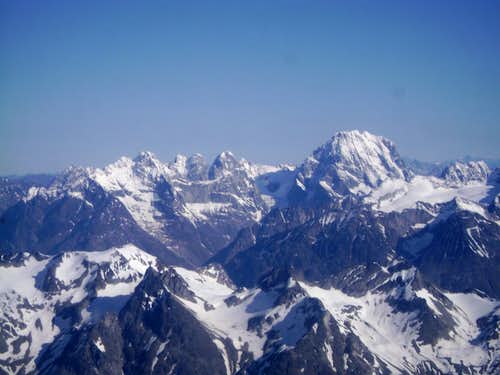 The soaring peaks of the Neacola Mountains. Mount Neacola, the tallest peak in the Neacola Range is on the right. This region is fairly popular with extreme skiers, and has been featured in several ski movies. 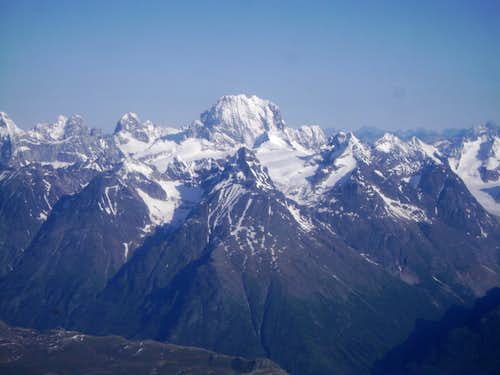 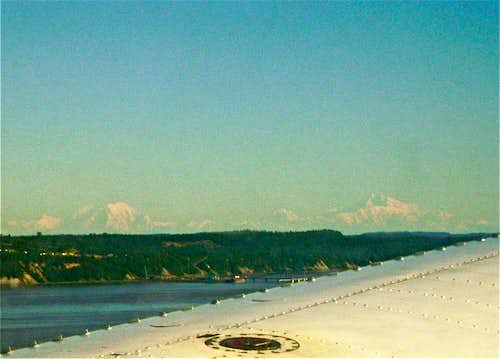 Taking off from Anchorage on a flight to Port Allsworth, a town in the northern Aleutian range. Mount Foraker(left) and Denali(right) can be seen in the distance. 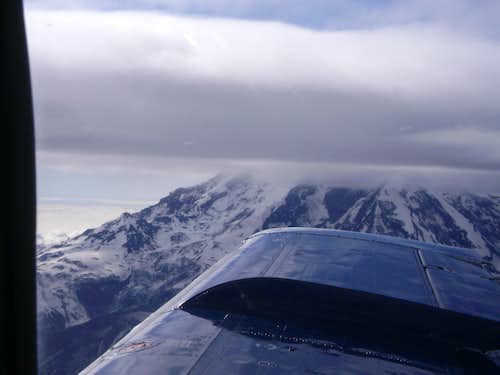 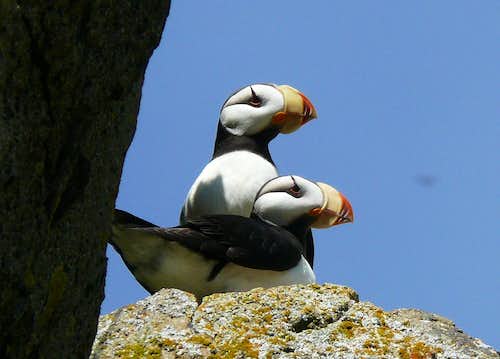 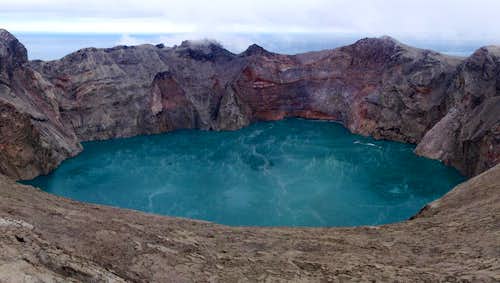 The crater lake at the top of Mount Kasatochi. This photo was taken 8 months after a major eruption. Photographer: Jeff Williams. Image courtesy of the photographer and the USFWS.
Katmai National Park:
Many of the most commonly climbed peaks in the range are those in Katmai National Park. Katimai is located on the Alaska Peninsula and thus is very remote. A trip to Katmai will take you deep into the heart of the Alaskan bush. From Anchorage, fly Penair to King Salmon, which is where the park headquarters are located. Katmai Air can take you to Brooks Camp, or any of the other lodges in the area. If water levels are high enough, you can take a boat from King Salmon to Brooks Camp. The peaks in the Barrier Range and the Kejulik Mountains can be accessed from Katmai as well. 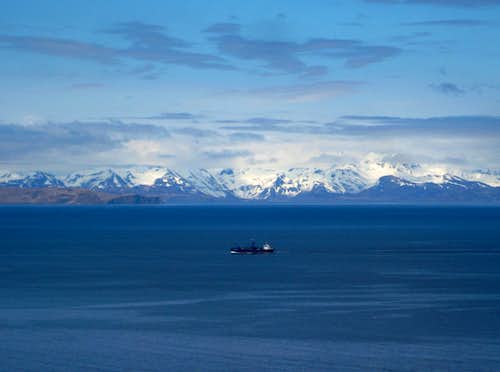 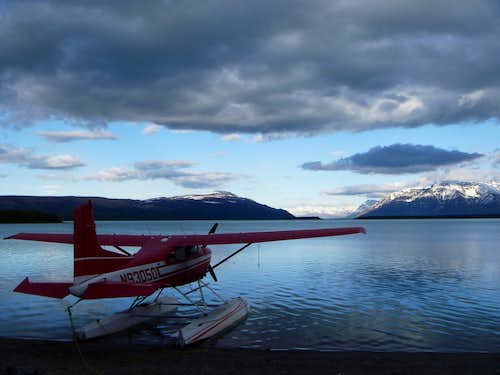 A floatplane in Katmai National Park. Due to its remote location, Katmai can only be reached by boat or plane. Photo courtesy of SummitPost member MPetrick.
Lake Clark National Park: 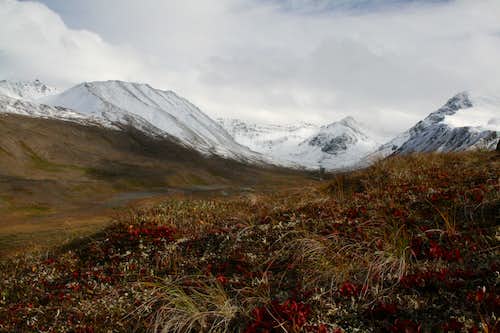 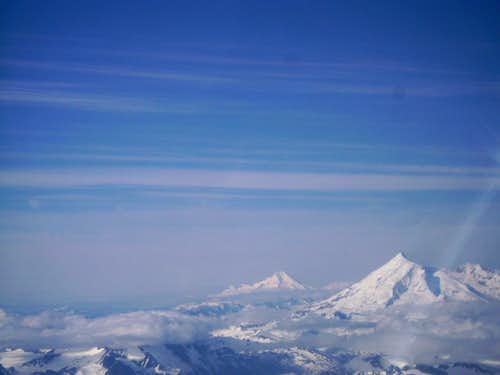 Mount Redoubt(right) and Mount Iliamna(left) both practically require aircraft in order reach them. They are the two tallest peaks in the Chigmit mountains and the northern Aleutian range.
The Chigmit and Neacola mountains lie(for the most part) within Lake Clark National Park. These mountains are very remote and almost necessitate air travel as a means of access. Alpine Air and Alaska West Air are two sources of air access to the major peaks, including both Mount Redoubt and Mount Iliamna. Mount Iliamna is visible from the town of Homer, on the Alaska peninsula.
The volcano can be reached by a boat ride from Homer, followed by a long hike to the basecamp. This would require a good deal of logistics and planning, which is why most climbers choose to fly to Iliamna. 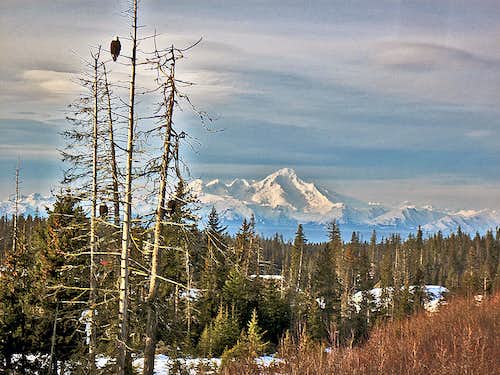 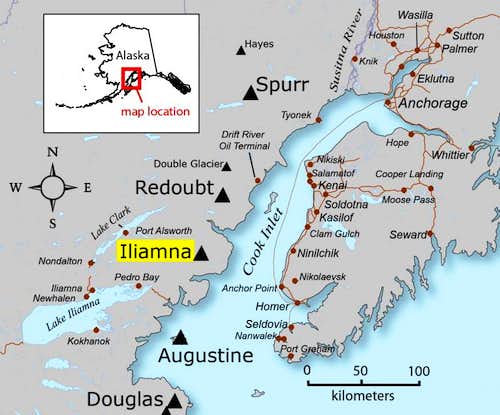 Map showing the Volcanos of the Northern Aleutian Range. Several volcanoes in this region of the Aleutian range are active. Image courtesy of the Alaska Division of Geological & Geophyiscal Surveys.
Port Allsworth is a small village within Lake Clark National Park and is also the park headquarters. From here both the Chigmit and Neacola mountain ranges can be accessed via a short hop in a float/ski-plane. Port Alsworth can only be reached by air, usually via a two-hour flight from Anchorage. Make sure you bring all of your supplies on the flight in, as Port Alsworth has practically no places to buy food or gear. 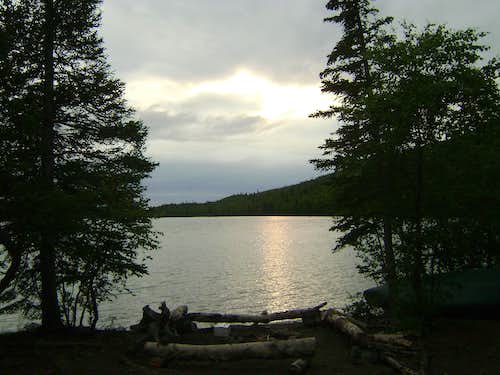 View from the shore of Lake Kontrashibuna, which is a short hike from the "town" of Port Alsworth. The trail from Port Alsworth is one of the very few maintained trails in Lake Clark National Park. In order to travel up Lake Kontrashibuna, a kayak or canoe is an absolute neccesity. There are no maintainend trails exept for the short one near Port Allsworth, and bushwhacking in this region is brutal. Alder growes everywhere below treeline and is very tedious and exhausting to crawl through. 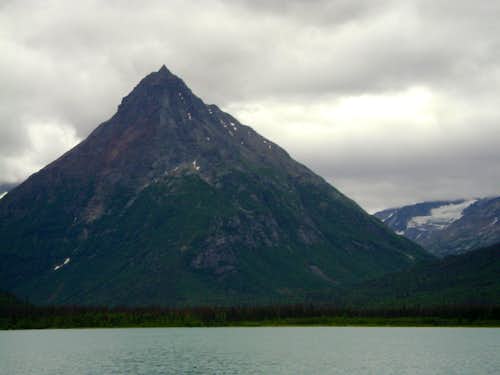 The Alaska Volcano Observatory website: www.avo.alaska.edu/. This website contains up to date information and photos relating to the major volcanos of the Aleutian Range. Visiting this site is a must for anyone who intends to climb one of the active volcanos in the range(such as Mount Redoubt). The USGS has observation equipment stationed on the active volcanoes, and they regularly post recent volcanic activity to the website. 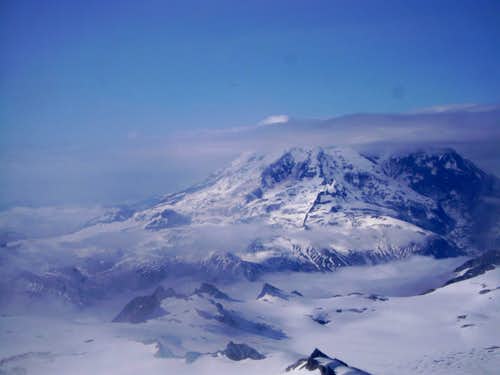