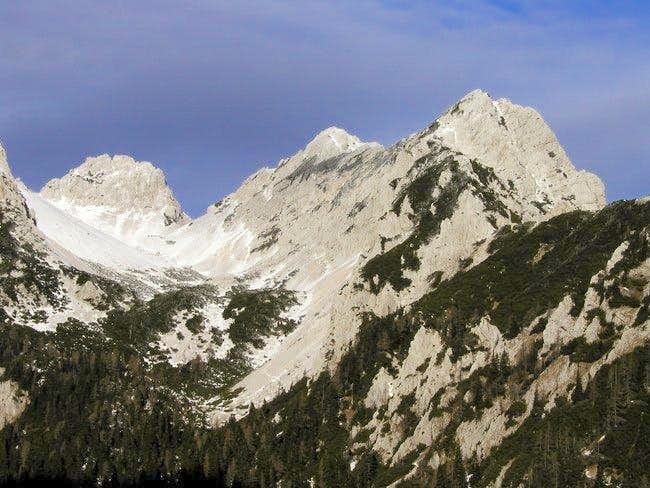 From the left: Zelenjak, Palec and unnamed peak in the ridge of Na Mozeh. Below this is the basin Suho rusevje. Palec is a mountain that is located above the basin Suho rusevje in the nearness of powerful Vrtaca (2180m). It is popular mountain but on its summit don’t go any marked route. You can reach the summit of them only over the unmarked, hunting routes. The easiest approach on the Palec goes from the basin Suho rusevje over the SW slopes. The basin Suho rusevje is very popular in Winter season for tour skiing and for starting point for the ravines in the NE face of Vrtaca. In snowless season the basin Suho rusevje is visited only because it is starting point for getting on the summit of Palec. In snowless season is this basin the world of rocks and some where of dwarf pine. Palec is located on the border between Slovenia and Austria and it is in the main ridge of Karavanke group. To the west direction Palec is connected with Vrtaca (2180m) over the small peak Zelenjak (2024m). Then the ridge continues over some unnamed peaks to the Orlice (Celovska spica) (2103m) and then to the highest mountain in Karavanke group Stol/Hochstuhl. From the summit goes the border ridge first in the SE direction over the famous ridge Na Mozeh and then turns to the east direction and goes over the summit of Zelenica skiing area Cez Pod (1686m) and then over the ridge of Ljubeljscica (1492m) to the border crossing Ljubelj (around 1100m). Below the summit of Palec is on the SE side (Slovenian side) the basin Suho rusevje, on the N side and NW side (Austrian side) Palec has around 500 meters high faces where are many ravines. These ravines are very popular for alpinist skiing.

----> Palec seen from the NE side. Some nice ravines are seen from here. For reaching the summit of Palec I suggest you that you go on it from the Suho rusevje over the SE slopes. This is the normal approach. For more good climbers I suggest the climbing on SE ridge of Palec. This ridge starts on the top of the skiing area Zelenica but you can reach over some passages from the basin Suho rusevje too. The difficulties are around UIAA I-II. I hear also for some passages over the NW face and slopes but they are hardly followed because these are the hunting and animal routes.

Vid Pogačnik: Just north of Palec/Selenitza, there's Dolič saddle, 1640 m, east of which there's the abandoned Strachalm / Strahova planina. From this saddle towards the north a long, predominantly forrested ridge stretches, culminating first in the summit of Rjautza/Rjavica. It is a wonderful panoramic point, well worth of a visit in almost any time of a season. More towards the north there's another forrested summit, Heilige Wand / Sveta peč, after which the ridge lowers down in valleys. The whole ridge forms the eastern border of the beautiful Bodental/Poden (valley). Rjautza/Rjavica can be easilly reached by a marked path from the start of Bodental/Poden. From Sereinig hotel we need some 2 hours 15 minutes. The other option is to gain the ridge from the ends of mountain roads which climb up towards it from the northern portal of Loiblpass tunnel. From the summit of Rjautza/Rjavca towards the south a tiny path goes towards the saddle between Rjautza/Rjavca and Palec/Selenitza. It is nowhere described and I can't say whether it reaches the saddle ant there connects to the paths coming on ex Strachalm / Strahova planina, or it may be goes down towards the west, thus enabling a nice round tour from Bodental. Please add information if you have it!

Palec is very popular in recent years. The reason is very free border regime after independence of Slovenia, with May 1st, 2004, when Slovenia entered European Union the border becoming virtually non-issue. The other reason is the road over Ljubelj pass, where on the south portal of the tunnel on 1058m the trailhead starts. And more, through most of the year a cable-car can bring you up to Zelenica meadows, where on 1536m the mountain hut stands. The second nice possibility is from north. From Ljubelj road near the church of Sopotnica/Sapotnitza a road deters westwards and brings you in Zabnica/Bodental, 1052m. This is the trailhead for north wall ascents, ascents through Zleb on the west side of the summit of Palec. The third trailhead is in Zavrsnica valley, where the road brings you below the south slopes of Vrtaca and then you reach the Zelenica meadow from the west side and then you continute to the basin Suho rusevje. This is the longest approach. Maps: You can see a detailed map on:

http://www.austrianmap.at/ ---> Very good overview map of all Austria. That's in German, but as of classical maps, you can refer to:

Stol in Begunjscica, 1:25000, Institut for geodesy and photogrammetry 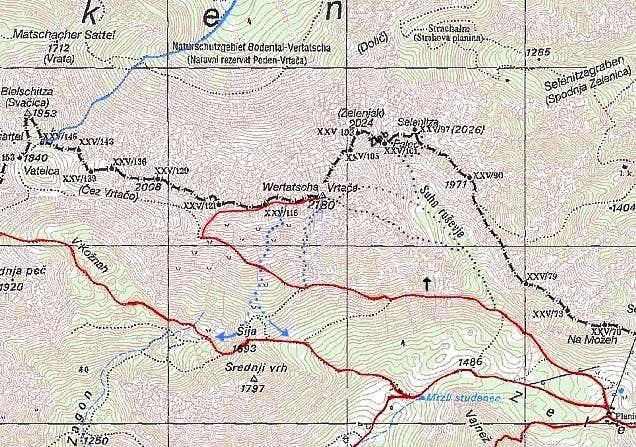 The map of the Vrtaca and Palec area. Summer routes: 1. Normal route from the basin Suho rusevje. (SW approach) 2. SE ridge from the start of the skiing area Zelenica. (NE approach) 3. From Austria through the Zleb and then over the SW slops to the top. (N-NW approach) Ski tours and alpinistic ski descents: 1. SW face from the basin Suho rusevje, IV-, S5. (SW side) 2. Centralna grapa, III+. (NW side) 3. Severozahodna grapa, IV-, S5. (NW side) 4. East ravine of Palec, to 50° and more, it depends of conditions. There are also many possibilities for new routes.

Palec has some nice harder climbs from north. In Stanko Klinar's guidebook the The North Pillar (raz) is mentioned as the finest one. R. Szalay & A. Ferch, Nov. 9th, 1924. UIAA IV-, 3h 30min. Also some other routes are among III and IV.

Bor, perhaps you can list among approaches also the East ravine of Palec. That must be a nice couloir (in spring), up to 52 degrees steep.