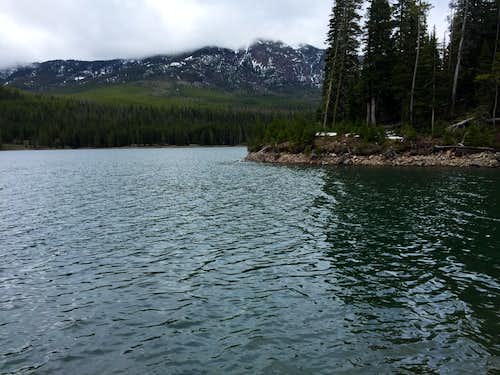 Palisade Mountain from Hyalite Reservoir with its summit in the clouds, May 2016.
Palisade Mountain, named for its cliffs and spires of igneous rock, is in the Hyalite Canyon region of Gallatin National Forest. The peak is very proximal to Hyalite Reservoir and surrounding campgrounds. It does not have particularly noteworthy elevation at 9,442', nor does it have significant prominence at ~400 feet. It does, however, provide a unique view of the peaks in and Hyalite Canyon, the Bridger Range to the north, Paradise Valley, and the Absarokas to the east.

Despite the lack of technical challenge or remoteness, the peak sees very few ascents. The summit log has about three or so ascents a year, with some years having none at all. If you want a mountain in the popular Hyalite Canyon region that will be devoid of crowds even on the busiest holiday weekends, this one's a great idea. 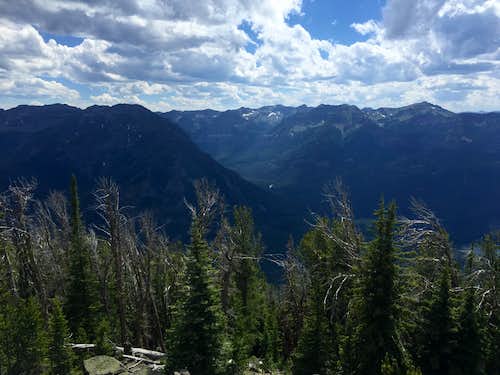 Palisade Mountain summit view, looking south.
From I-90, take exit 305 onto North 19th Street. Continue on North 19th Street heading south until it goes through Bozeman and becomes South 19th Street. After heading out of Bozeman, continue on the road until it reaches a long, ninety degree right hand turn. After the turn, take the third left onto Hyalite Canyon Road (Distance from Exit 305 to Hyalite Canyon Road: ~9.5 miles). Once on Hyalite Canyon road, continue up it over the dam, and to pavement's end. Continue to a signed junction indicating a left for Emerald and Heather Lakes, and go left. You'll soon cross a bridge over the East Fork of Hyalite Creek, and immediately come across a parking lot for the Palisade Falls trailhead. Instead of turning into the parking lot, turn right and continue up the dirt road. You are looking for an old forest service road, with a sign marking the trailhead for trail 171 (Distance from bottom of Hyalite Canyon Rd. to trailhead: ~13.5 miles).

Palisade Falls
From the road, follow trail 171 for approximately 1.6 miles. At this point, the trail will make a sharp right-hand turn. This point is marked as point 8580 on NFS and USGS maps. Rather than following the trail, break from it to the left. Either by contouring or going against the fall line, acquire the broad, north-south ridge just to the west of the trail. The next step is to follow it north to point 9403. This is mostly easy walking, I found there were open meadows just to east of the ridge that made for easy walking. From here, follow the main ridge all the way to Palisade Mountain. To the col, the ridge is very easy to follow, however past the col it has a few difficulties that can be negotiated with basic routefinding abilities. We found that generally, though with some exceptions, the west side of the ridge was more negotiable. If you have to climb down to get around any obstacles, make sure to try to reacquire the ridge as soon as possible.

There is an ascent logbook hidden in the summit cairn. Feel free to note your ascent, but then tightly re-seal its container, and leave it where you found it for future hikers.

On the way back, simply retrace your steps. DO NOT attempt to contour back to the broad, north-south ridge from the col. You will get cliffed out and be stuck slogging back up very nearly to point 9043 in order to get around. You'll be better off following the main ridge all the way back up.

A GPS helps to know when to drop off the broad north-south ridge to reacquire the trail, if you have no such luxury, it is better to drop to your east earlier rather than later. If you do so too early, you can easily follow the drainage you end up in back to the trail. If you do so too late, you may encounter some gnarly, crumbly cliffs of volcanic conglomerate.

The route totals ~3 miles each way, with 1.6 of those miles being on well maintained trail. The total elevation gain is 1800 feet, about 900 of which is on trail. The route is Class 2 with minimal exposure.

There are likely other routes up this mountain, especially for those willing to negotiate class three and four terrain. There are many irregularities in the rock and structure of the mountain that do not show up on topo maps, and may not be discernible on satellite imagery.

If you have the time and the weather is holding up, Palisade Falls is worth a visit. The trail is short, not steep at all, and even paved. Sources list the mileage as between .6 and 1. The trailhead is the first large parking lot on the right as you head back down the canyon. Unlike Palisade Mountain, the falls are very easy to access and very popular, expect company along the way and at the falls all times of year and all days of the week. 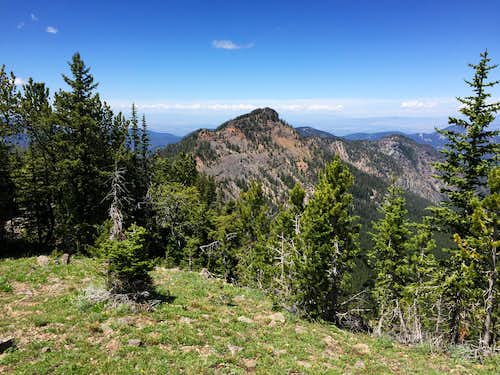 There are no permits or fees for climbing Palisade Mountain, parking is free and passes are not required.

This is bear country, so take standard precautions.

Palisade Mountain, like most peaks in the region, is normally climbed in the months of May through September. The route is on the mountain's southern and western aspect, so it may be accessible earlier than other areas of similar elevation. Winter travel would be difficult and necessary precautions (i.e. snow shoes, crampons, etc.) would be required.

There are several developed campgrounds in Hyalite Canyon, and the closest to the trailhead is Chisholm (1.5 miles away); sites for it and some of the other area campgrounds can be reserved at recreation.gov. If you don't have a reservation, get out here early on Saturdays and holiday weekends. There are also two rustic cabins nearby, Window Rock (closer) and Maxey, that can be rented through recreation.gov. No permit is required for backcountry camping.