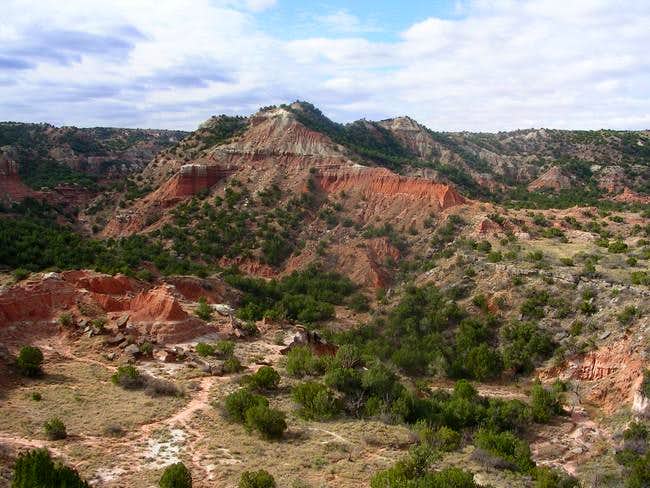 The "Grand Canyon of Texas", Palo Duro Canyon is a huge canyon located in the Texas Panhandle. It definitely counts as an inverse mountain but also consists many named and distinct mountains within its walls. It is 120 miles long and up to twenty miles wide with depths up to 800 feet and is considered by many to be the second largest canyon in the country (second of course to the Grand Canyon). It is also largely significant because it is the only thing that would interest a climber for several hundred miles around. Because of this flocks of tourists head to the canyon in the summer to camp, hike, ride horseback and explore this scenic wonder.

Palo Duro Canyon is located at the edge of the Llano Estacado (staked plane) a huge, barren plateau that covers large parts of western Texas and eastern New Mexico. The canyon is literally a huge hole in the ground and driving up on it from the west (see below) across the Kansas flat Llano it is hard to imagine that the canyon even exists. You almost have to fall off the dge to know that it's there. The Prairie Dog Town Fork of the Red River flows from the Llano and has slowly eroded this huge canyon. It is intereting to think that such a small stream with such a long name has carved such an impressive canyon. Wind and water continue to erode the canyon and have carved into what it currently is.

The scenery is in many ways reminsicent of the red rock canyons of Utah with even more color. However the canyon is composed not really of rock but compressedd layers of dirt. Because of this climbing on the canyon walls is very dangerous and not recommended. The colors are layered and usually follows the pattern of red at the bottom leading up to yellow and purple leading up to orange and white. It is indeed some of the most colorful "rock" that i've seen anywhere.

The canyon is actually a system of canyon that join together to form a large canyon heading out to the horizon. The part of the canyon that has the road and is available to tourists is only but one of the many canyons in this network and only a small part of the canyon is visible. A small network of trails into the backcountry of side canyons but the majority of the canyon remains as untracked and wild as ever. Within the next ten years the park is looking to open a large network of backcountry which would make treks as long as thirty miles possible. 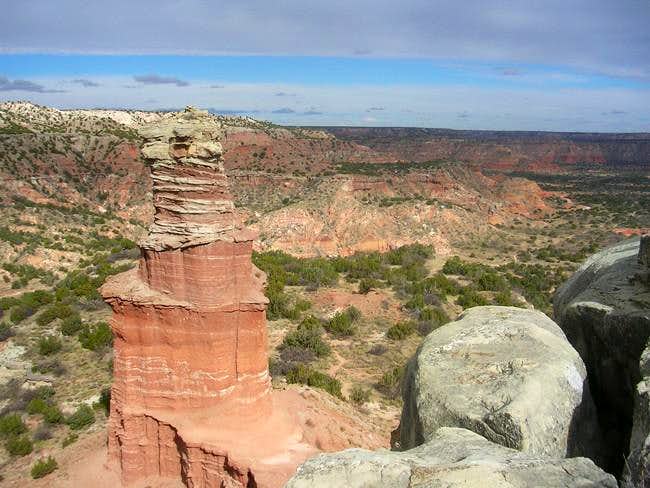 Lighthouse Peak seen from the top of the rock fin directly behind it.

The Lighthouse is probably the most famous landmark in all of the Panhandle. Rising 400 from the canyon floor and approximately 150 ft. from its pedestal, The lighthouse is a fabulous free standing pillar. The Lighthouse is located three miles up Sunday Canyon, a side canyon off of the main canyon with the road. It is the farthest into the Palo Duro Canyon backcountry that trails lead and surrounded by rugged canyon walls and untracked wilderness. Directly behind (to the south of) the peak another rock fin rises up from the same pedestal to approximately the same height as The Lighhouse. The trail to The Lighthouse leads up to the pedestal and from there it's possible to climb up onto this rock fin. The top offers spectacular views down canyon and also includes views of nearby Castle Peak, and further away Capitol Peak, as well as a great top-down view of the Lighthouse. Climbing The Lighthouse is forbidden due in part to the loose and rotten nature of the rock.

Castle Peak is an imposing peak in Sunday Canyon less than a half mile from The Lighthouse. The peak is composed of the same red cliffs as the rest of the canyon but is steeper and looms over visitors as they make their way to The Lighthouse. The peak is infrequently climbed because of it's rugged nature and because of the bushwhacking over rough terrain that would be required.

Named for resmeblance to the american capitol building in Washington DC, Capitol Peak is an elegant and stately peak the stands prominently over the road. Capitol Peak is in many ways the heart of the canyon because of its centralized location, and its prominence away from the canyon walls. Capitol Peak is quite on its lower slopes but the cliffs rise to up to a more gentle and graceful summit pyramid. Capitol Peak can be seen from many points on the road as well as the rest of the park, and inspires visitors to climb it (including myself). This is strongly not recommended due to the rotten crumbly nature of the rock and the steep slopes.

Palo Duro Canyon is located approximately twenty miles south of Amarillo and ten miles east of the small town of Canyon. From downtown Amarillo take Interstate highway 27 south toward Lubbock until the exit for Texas 217. Follow 217 due east for ten miles until you reach the park entrance.

Upon entering the park the road follows a mesa top until it reaches the first great viewpoint and the visitor center. From there the road circles around back to the northwest before dropping steeply down in to the canyon in a series of switchbacks. Once inside the canyon the road crosses the river six times and loops back around on itself. The road is a total of sixteen miles long. 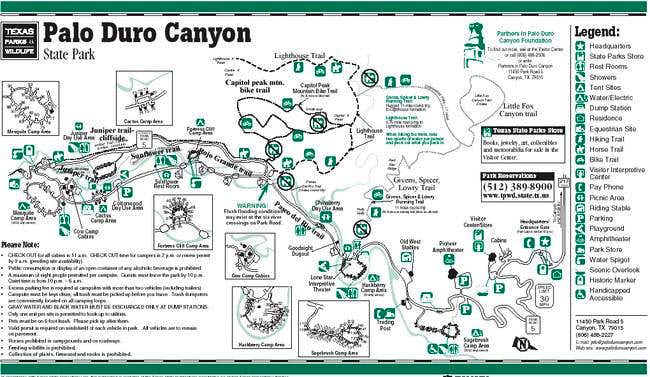 This map is the official park map distributed at the entrance. It shows all of the facilities and trails within the park. Sorry for the poor resolution, I'm not sure how to fix that. For a larger PDF version of this map click here.

Palo Duro Canyon contains many trails of varying lengths and for different forms of recreation.

The Givens, Spicer and Lowry Trail This rugged trail explores gullies and ridges in a colorful setting on the north side of the Sunday Flats before ending up on the Lighhouse Trail. It is total roundtrip of 11miles from the trailhead to the lighthouse. This trail is closed to horses but open to bikers and hikers.

Paseo del Rio trail This short 1 mile trail follows the river between the first and second river crossings on the road. The trail is closed to horses.

Rojo Grande Trail This short 1 mile trail leads from the first river crossing to the fifth along a shady canyon bottom. It is closed to horses.

Sunflower Trail This 1 mile trail leads from the end of the Rojo Grande Trail to a point on the road on the other side of the canyon along the river. Closed to horses.

Juniper-Cliffside TrailThis trail is open only to horses and is about three miles long. It leads from the sixth river crossing to the beginning of the Lighthouse Trail at the second river crossing.

Palo Duro Canyon is owned and maintained by the Texas State Parks and Wildlife. A four dollar entrance fee is required for anyone over twelve. Some of the facilities such as picnic areas and campgrounds are closed from the first of November to the second of March, but enough are still open that it shouldn't affect you too much. The hiking trails remain open all year.

The park is open and beautiful year round. Summer can be brutally hot and brings on additional threats like rattlesnakes and bugs. Winter can be cold and extremely windy but provides the advantage of cooler temperatures less crowds, rattlesnakes and bugs. A nice day in winter can be a very pleasant time to visit. Fall is probably the best time of the year to visit since all of the trees in the bottom of the canyon are turning their leaves and the color justs adds itself to the already present multihued colors of the canyon walls.

An abundance of campgrounds dot the canyon floor and some cabins are available. In summer it would be smart to make reservations in advance due to the large numbers of people who flock to canyon. Fees vary based on the facility. See this site for more information.

www.Palodurocanyon.com provides maps and information on closures and other conditions that may affect your visit.

Weather can be checked for Canyon, Texas.

You originally reversed the topo marks (lat/lon) but these marks are in Colorado, not Texas.