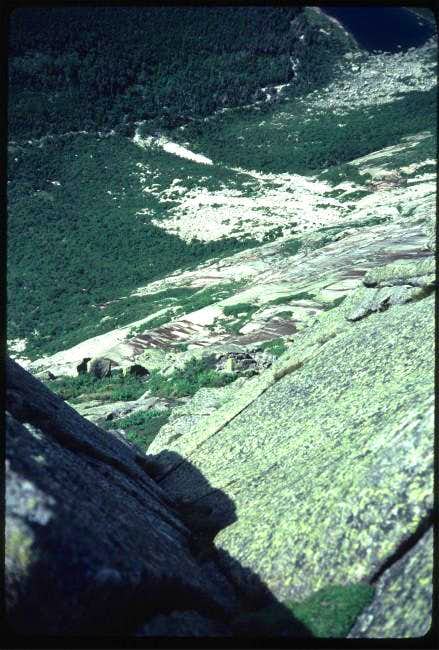 Walk up from Roaring Brook to Chimney Pond gaining3.3 miles and 1600 feet. From the Ranger's Cabin at Chimney Pond look across and up at Pamola on the left. You want to finish on one of the 4 ridges to the summit. After getting approved by the chimney Pond ranger before noon, go to the right around the pond avoid the left side of pond because of gigantic boulders. One Photo shows the Armadillo from somewhere in "Italy" . "Italy" being the talus coming down from the Chimney. The other Photo is taken from the southwest side of the chimney and looks at the rock triangle that starts the climb.

Find the brook that feeds Chimney pond at its south end and start walking up it. Aim for an area of outwash from the Chimney that looks like a map of Italy. Climb starts on the left side of Chimney perhaps opposite the false chimney(false Chimney joins Chimney from the right).
Climb up the side of a ridge traversing to the north which gains height since the chimney falls away in this direction. At the top of this narrow ridge still with scruffy vegetation it is surprisingly narrow. We knocked of a rock and it went 100s of feet down. Cross over underneath a big triangle of rock and rope up. Climb this triangle in three pitches (5.5). Much of the route after this is obvious ridge and 4 th class. But resumes 5th class as you get higher. You will gain 2000 feet from Chimney Pond and about 1300 feet from your start at the bottom of the chimney

In the winter this would be an ice route and Katahdin is really cold- See Rick Wilcox' book on northeastern ice. Summer 50 meter rope and a few chocks, hexes and up to medium friends. There were still chunks of Ice at the base of the Chimney in July 13, 1982