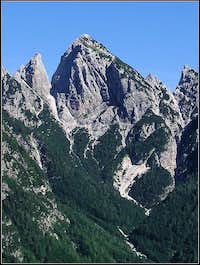 Pan di Zucchero ("sugar loaf") is an audaciously formed rock cone between Cima Piccola della Scala, 2099 m, on the west and Vetta Bella, 2049 m, on the east. The later is separated from Pan di Zucchero by a well-defined saddle Forca di Riobianco, 1860 m. This col represents a natural passage between the valley of Riobianco and Riofreddo, respectively. Marked trail, named "Sentiero Carlo Puppis" connects both valleys over the col: on the north side it is an interesting, not too hard ferata, which crosses the N wall of Vetta Bella over the slanted, wide ramp. On the south (Riobianco) side it poses a strenuous walking-up through the steep scree ravine between Pan di Zucchero and Vetta Bella. It surely isn't the best, the Julians can offer to their admirers.

However, no marked or secured path reaches the summit of Pan di Zucchero, so it has to be climbed "by fair means". The normal ascent route is not excessively hard; it represents rather an easy scrambling which doesn't exceed the UIAA II. grade of difficulty. But it isn't flawless: the rock, which is mostly superb in the cliffs above the Riobianco valley, is quite friable here.

The first ascent on Pan di Zucchero was performed by J. Klauer in 1916. Only a year later E. Renker and H. Klug were the first summiteers in winter (17 February 1917). Nowadays, the peak is wrongly somewhat neglected; the nearby higher crags seem to be obviously more attractive to contemporary climbers. 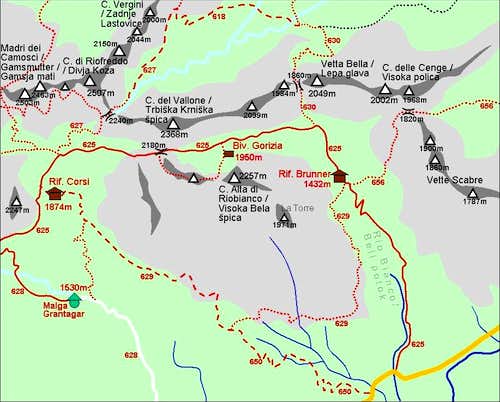 For broader insight see the Julian Alps and Vis and Montaz Group pages.

To reach the starting point for the ascent on Pan di Zucchero, one has to ride from Tarvisio/Trbiž southwards through the ex-mining village Cave del Predil/Rabelj (12 km); then along the northern bank of the lake Lago del Predil up to the bridge over the Riobianco creek, where the parking place is found (additional 5 km).

The tour on Pan di Zucchero should be carried out in a single day, so the lack of manned huts in close vicinity doesn't represent a serious embarrassment. To spend a night in the Brunner hut surely isn't an attractive opportunity. 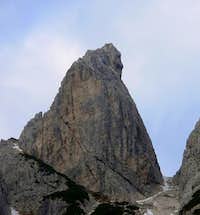 1. Normal ascent route. Difficulty: UIAA II, 160 m. Mostly used for the descent purposes, the route is also warmly recommended as an ascent one for more modest climbers. From the Brunner hut we follow the Puppis trail up to the foothills of the S face of Pan di Zucchero. Leaving the marked path and turning to the left, a wide ramp appears as a next part of the ascension. The ramp, covered with scree, grass and dwarf pine isn't difficult to climb; it terminates right at a shoulder on the west ridge of the mountain. From there we have to follow an almost horizontal ledge, leading into the N wall. At the end of the ledge, the hardest (and slightly dangerous) part of the ascent ensues. Scrambling up the rugged and friable rock step (II, 30 m), we reach a narrow scree notch in the west ridge. Then, we continue up upon the ridge; before the summit is reached, we have to overcome some short bumps (II-, solid rock) by pleasant scrambling (2h from the Brunner hut).

The descent route is the same. Usually, it's no need of rappeling.

2. NNW Buttress. Difficulty: UIAA V-/IV, III, 400 m. First ascent: G. Buscaini, S. Metzeltin, G. and L. Rossi, 7 August 1971. Rarely, if ever repeated route due to abundant green cover in the lower part of the wall, where the most difficulties are concentrated.

Because the normal ascent route is partially exposed to the north, the summer and autumn months are the best timing to climb Pan di Zucchero.

Viš group, seen from the East.