Situated in between two of the most popular hiking areas in the City of Phoenix, are a series of mountains within Stoney Mountain Park. Among them are Stoney Mountain, Veterans Mountain – Peak 1922, and Peak 1845. The northernmost summit in the park is Peak 1871. Peak 1871 is somewhat distinctive due to a ‘shark fin’ like formation that makes up its summit. 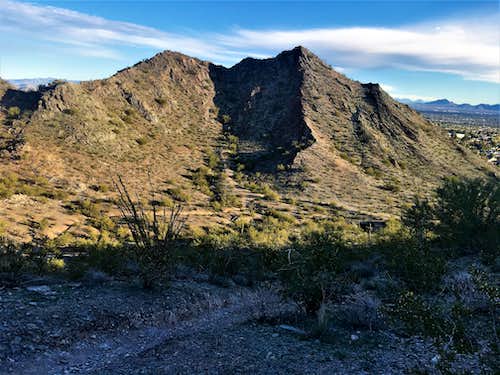 View of the south face and the 'shark fin' 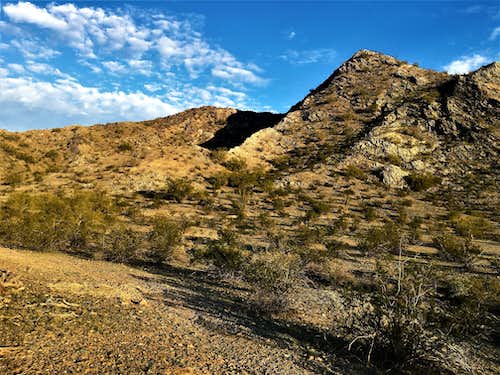 View of the 'shark fin'
Peak 1871 can be reached from several trailheads, including Dreamy Draw, or from neighborhoods or neighborhood parks. Despite having a prominence of only 301’, Peak 1871 is a worthwhile destination. It can easily be combined with neighboring summits, and it offers a fun scramble to reach its rocky summit. There are multiple options to start the hike, but the closest is Christy Cove Park off of 24th Street, south of Cactus Road. There is also the option to start from the very popular Dreamy Draw, which offers access to Stoney Mountain to the south. Peak 1871 requires some light scrambling, but overall, it isn’t too difficult. It is best hiked between November and March; although it isn’t inconceivable to hike here in the morning any time of year.

The easiest way to the summit is from Christy Cove Park off of 24th Street about ¾ miles south of Cactus Road. There are several parking spots in the park. Peak 1871 rises above the park. This is the east approach. 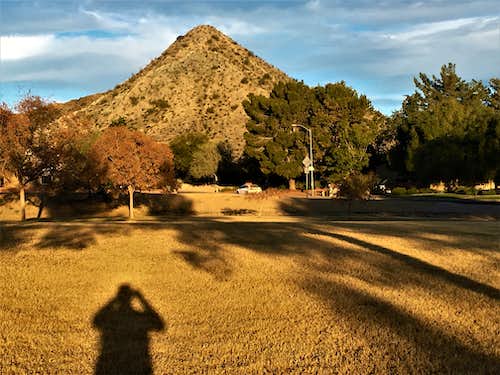 Peak 1871 from Christy Cove Park
For an approach from the west, take Cave Creek Road south to Cinnabar Avenue. Continue on Cinnabar to 16th Street and turn left and park on the street. From Dreamy Draw, the main starting point is the tunnel under Highway 51. Take Highway 51 to Northern Avenue and take a left. It leads right to the trailhead. At the back parking lot, you will be hiking to the tunnel, which is Trail 100. The address is 2421 E. Northern Ave. There are other options. One option is a parking lot south of Cactus just east of Cave Creek Road. Currently, there is the Cactus Tavern at 2017 East Cactus Road. At the south end of the parking lot is access to the trail system, and Peak 1871 is directly south and easy to reach.  No route information is needed for this approach.

From Christy Cove Park, walk across the park, and north onto Desert Cove Avenue. At the end of the street is a trail entrance. Take the trail for a quarter mile to the south side of the mountain. Take a trail on the right which heads up to a saddle between a lower rocky summit and Peak 1871. Follow a use trail as it snakes up towards the mountain. It is easy to lose, but even if lost, it is easy to find again. Some light scrambling is required to reach the summit. It is only about 0.9 miles from the park to the summit, gaining about 425’. There is plenty of opportunity to explore the area further. From 16th Street north of Cinnabar Avenue, take the trail north, which curves around to the right. After about 2/3rds of a mile, there is a Y-junction. You can take either trail and it leads to the same place, which is right below a minor summit to the north. Take a trail that heads to the left of the minor summit and Peak 1871 is right in front of you.  Continue on the same trail up to the summit. It is about 1.3 miles to the summit this way, gaining over 500’. Once again, there are plenty of opportunities to explore the area further. From Dreamy Draw, take the trail under the tunnel, and continue on Trail 100. From there, Stoney Mountain opens up ahead of you. Take the trail that continues east past Stoney Mountain and eventually leads to the base of the minor summit mentioned above. Go up that trail and you will be right at the same trail going up Peak 1871. It is about 1 ¾ miles one way to the summit from here, gaining about 650’ with some ups and downs. This is ideally combined with Stoney Mountain, which would add less than half a mile and about 500’ of additional elevation gain.

There is no red tape in particular. If parking in the neighborhoods, just be mindful of where you park. Dreamy Draw is open from 5am to 7pm (extended to 9pm from June 1 through September 30th).