Peak 8's summit and east-facing bowls are within Breckenridge Ski Area while the ski area is operating. Breck typically closes in mid to late April each year.

However, this terrain is typically skiable for months after official closure. Peak 8 is a great bet for a late season ski. Access can be made much easier using the County Roads that zigzag up Breck's slopes. These roads open up after the snow melts.

Peak 8 has a variety of terrain, but all of it is considered "expert" by the Breck owners. It is all double black diamond or greater. The Lake Chutes are some of the tougest terrain that I have ever skied in-bounds at a resort. They are a "must-do" for any serious Colorado skier. Also, the Imperial Bowl is a very enjoyable descent, and is quite popular.

As of Summer 2005, Breckenridge Resort is building a ski lift that will access the summit of Peak 8.

From Breck's Steep Savers Email list:
"Breckenridge Ski Resort began construction on the much anticipated Peak 8 summit lift, the Imperial Express SuperChair. Breckenridge’s newest high-speed quad will be the highest chairlift in North America, reaching an elevation of 12,840 feet and transporting skiers and riders to the top of Breckenridge’s renowned Peak 8.

With a vertical rise of 939 feet and a ride time of a little more than two-and-a-half minutes, the Imperial Express SuperChair will serve 400 acres of Breckenridge's famed existing in-bounds double-black diamond and extreme terrain previously only accessible by hiking.

Advanced-intermediate skiers and riders also will be able to take advantage of the now lift-served terrain in Imperial Bowl, which will provide much sought after, above timberline, groomed terrain. From the top of the new lift, skiers and riders of intermediate, advanced and expert levels will be able to challenge themselves in Art’s Bowl, Peak 7 Bowl, North Bowl, Imperial Bowl, Whale’s Tail and the resort’s in-bounds extreme terrain located in the Lake Chutes."

While the ski area is operating, you will have to purchase a ski pass to access Peak 8. Simply ride the T-Bar lift to the bottom of Peak 8 and hike up the easy ridge to the summit. Ensure that you check with the ski patrol to see if the Peak 8 terrain is open. There is usually a gate just to the left of the top of the T-Bar that will be marked. There is also a ski patrol hut near this gate. Don't risk getting your ticket clipped by entering closed terrain.

If the ski area has closed for the year, use any route you wish to access Peak 8. Some options are:
- Beaver Run Resort
- From Peak 9

The following routes refer to the TOPO map below. The colors of the route names correspond to the colors on the TOPO. The skiing ratings are from Breckenridge Ski Resort. Note that difficulty can increase if you ski this terrain after the close of Breck Ski Area.

RED= Ridge walk from top of T-Bar
The dotted red line shows the walk up route from the top of the T-Bar. This is the best way to access skiing, especially when the ski area is still operating.

BROWN= The Whale's Tail
Rating: Double Black Diamond
From the summit, descend along the ridge that leads to Peak 7. At or near the saddle between the two peaks, ski down the obvious bowl. This will drop you off on the Peak 7 side of the resort.

GREEN= The North Bowl
Rating: Double Black Diamond
Descend generally along the walk-up route from the T-Bar and ski the bowl it leads to. This may lead you to some of the slopes of the Whale's Tail. This route is a good option to descend down to the top of the walk-up ridge if you are going to do laps.

PURPLE= The Imperial Bowl
Rating: Double Black Diamond
The Imperial Bowl is a terrific ski and is probably the most-skied line off of Peak 8. Descend directly off of the summit into the prominent bowl. This bowl drops you off above the top of Chair 6.

BLUE= The Lake Chutes
Rating: Expert / Extreme
This is the premier ski at Breckenride, in my opinion. The Lake Chutes are some of the steepest terrain available at any ski resort within bounds. From the summit of Peak 8, descend along the Peak 8 - Peak 9 ridge until you find yourself above the small lake next to Imperial Bowl. There is almost always a very large cornice here. Drop in over the cornice and ski your chosen line to the lake below. To exit, ski the remainder of the Imperial Bowl.
The steepness of Lake Chutes can exceed 50 degrees near the top with a season's worth of snow below the cornice. This is classic alpine skiing with rocks, cliff bands, and other obstacles. Always ensure that the terrain is open with ski patrol (if the ski area is still operating). 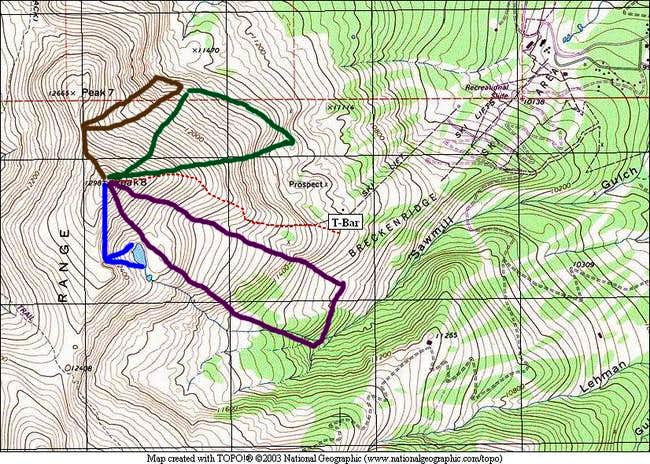 Skis, of course. Randonee (AT) or Telemark gear will make the hike to the summit of Peak 8 much easier. It is easily skinnable.

Click this link for a high altitude NOAA weather forecast for Peak 8.

Got a penchant for suffering? Try this:

IMPERIAL CHALLENGE
The twelfth annual Imperial Challenge warms up with a 6.2 mile mountain bike ride from the Town of Breckenridge across Peak 7 to Peak 8. Followed by a 2,500 foot, wind testing ascent of Peak 8 to the top of the Imperial Bowl on the equipment of your choice. As your quadriceps quiver from oxygen deprivation and lactic acid build up, begin your descent to the base of Peak 8 on skis or a snowboard. An hour and forty-five minutes could win; two hours would be a great time!