The Grand Canyon of the Colorado River makes a deep cut through an elevated highland above the surrounding deserts: the Coconino Plateau on the south and the Kaibab Plateau on the north. Grand Canyon National Park encompasses the big canyon as well as substantial parts of both north and south plateaus, both sections ("North Rim" and "South Rim") being accessible by paved roads. The Canyon is a wonderland of mesas, buttes, pinnacles and terraces, but the plateaus (or the edges of them - the rims) offer the magnificent views of all this terrain. The higher Kaibab Plateau is compared to a great inverted shallow dish by Pyne (1989), with the highest point on the Kaibab Plateau being an otherwise unremarkable place deep in the forested interior (see "North Rim lookout" by Summit Poster surgent). Of the canyon edge of the Kaibab Plateau,  Point Imperial is said to be the highest rim point in the national park (8803' or 2683 m elevation). A nearby un-named peak, 8881' in elevation, is an easily accessed hilltop with 300' of prominence from surrounding high points - quite a rarity on either Rim. It is accessed by a short hike from the end of a good forest road. This un-named peak is informally known to wildfire fighting personnel as "Big Round Top" (Pyne, 1989).
The route parallels the border between GCNP and the Kaibab National Forest-managed Saddle Mountain Wilderness. Although the peak itself is just outside the Park, I include it with the Grand Canyon.

The Kaibab Plateau ("North Rim") is accessed by AZ Highway 67, which passes through the small tourist village of Jacob Lake. (At Jacob Lake there is a US Forest Service visitor center - stop here for information). From Jacob Lake, travel south on scenic 67 a little over 26 miles to the junction with Forest Road 611 (to your left or east). About 1.5 mile down this road is a junction with FR 610 - take this right and travel another 12 miles to the loop turnaround at the Nankoweap / Saddle Mountain Wilderness trail head. Much of this section of FR610 follows the Kaibab National Forest / Grand Canyon National Park boundary. Total travel on the unpaved road is about 14 miles one-way. The road is well-travelled and well-maintained by the USFS for joint use by USFS and the National Park. I recommend stopping at the Jacob Lake visitor center to ask about the road condition - sometimes deadfall blocks the road.

A visitor register kiosk is maintained at the Nankoweap trailhead - the start of a short walk to the top of peak 8881. The trail runs eastward right over the broad, mostly treeless summit, and the highpoint has a small cairn marking it. It is ridiculously easy to get to the top - it should take even a slow walker no more than 20 minutes. Elevation gain will be slightly over 300 ft. It is well worth the view! If more walking is desired, continue on the trail. The Nankoweap trail branches further: one branch drops over 4 miles to a lower trailhead in House Rock Valley, another branch continues to the Colorado River in Grand Canyon National Park. 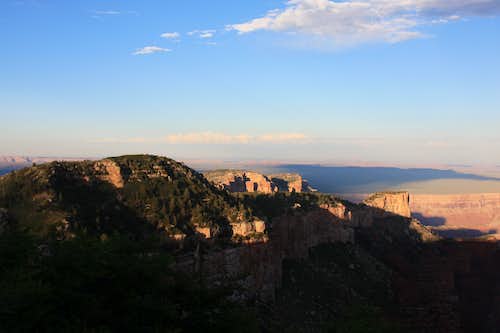 By the way, you can access Point Imperial with some small honor by walking to it (instead of driving to it like I'm sure 99.9% of visitors do). The Point Imperial trail (4 mile round trip) starts at a signed gate a short walk up FR610 from the terminal loop. The trail crosses a major burn area from the 2000 Outlet fire (yes, big fires get names just like big storms). Parts of the trail are getting overgrown with a thorny bush (Arizona locust, or "wait-a-minute bush" according to Pyne). Wear long pants to avoid getting scratched up. 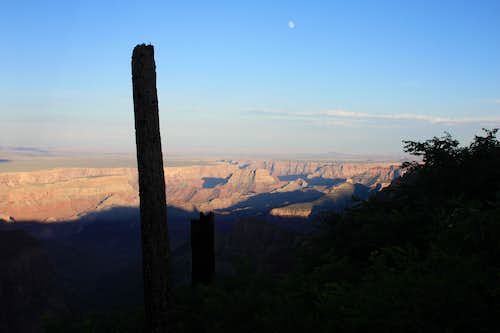 this is the type of view one gets from peak 8881

Vehicle use is restricted to existing roads. The hike is entirely within the Saddle Mountain Wilderness Area.

Arizona Highway 67 south of Jacob Lake is closed at the first heavy snowfall (in general, late October or early November). The road re-opens usually in the latter half of May. I suppose that one could walk up to the hilltop in the depth of winter from the lower trailhead in House Rock Valley (Forest Road 8910).

Several good car-camping sites exist at or near the end loop of Forest Road 610. Please practice low-impact camping. Pack out your trash and don't destroy the vegetation. If you have a fire, use existing fire rings.
Alternatively, the USFS DeMotte campground will be passed on Highway 67, less than a mile north from the described intersection.

I found interesting reading about the area in Stephen J. Pyne's book Fire on the Rim - a Firefighter's Season at the Grand Canyon (1989, University of Washington Press, Seattle).