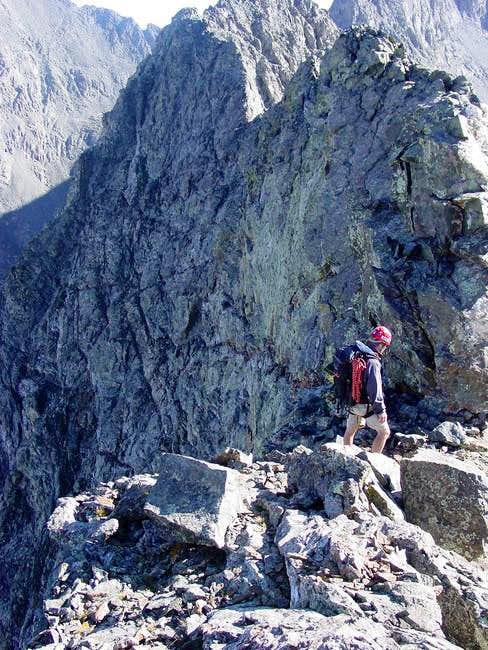 'peakguru' wishing he hadn't brought his rope along the Little Bear Blanca traverse. The route takes the ridgecrest seen in the background. Despite the exposure, ropework would have been counter-productive. August, 2003.
« PREV NEXT »

Why would ropework be counterproductive? Because of time, angularity of the traverse, or lack of good anchor points? What about roping to each other? Just wondering

Despite the technical look of the ridge, most of the climbing is of 3rd and 4th class nature. The fifth class sections are easy and short (2-4 moves at a time), and consist primarily of moving laterally around obstacles, albeit with massive exposure. Fumbling around with pro on sequences like these would make them more difficult and dangerous. The principal risk while on this route would be getting caught in a fast moving storm (and these happen a lot in CO, sometimes with little warning, as you probably know). There is almost no opportunity for retreat until you reach Blanca's summit, therefore speed is the critical factor, and roping up, even for short sections, consumes too much time. All that being said a downclimb of the 'Hourglass' route on Little Bear as opposed to a traverse to Blanca would be much easier with a rope for rappelling the bowling alley section.

Also, unless you're giving a hip belay from above to an inexperienced climber following you, you should never rope together on rock without placing pro and setting belays. It's safer to simulclimb un-roped.

What about being roped up (just tied to each other) on a glacier or large ice field?

Exactly, only on crevassed glaciers would it be safer to rope together without placing pro. On rock or steep snow/ice it just guarantees both parties will fall together.