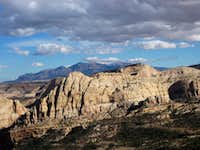 Seen from the trail to Navajo Knobs 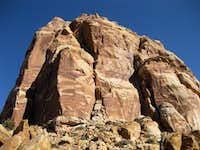 It was here on SummitPost that I first "saw" Pectols Pyramid by name even though I had doubtlessly seen the formation several times during actual visits over the years.

And it was during the hike to and from the Navajo Knobs in 2009 that I really admired the peak and started getting into my head that I might want to try finding a way up it.

Named for Ephraim Portman Pectol, a man instrumental in the early efforts to establish protection for the area that is now Capitol Reef National Park (more information here), Pectols Pyramid is a sandstone monolith just off the main road through the park. It is easily seen from the east or the west as one drives the road, but it does not especially stand out from surrounding formations from those perspectives. However, from the trails to Hickman Bridge and Navajo Knobs, its spectacular shape is on full display as it lives up to the geometric aspect of its name.

As many people know, I prefer the freedom and simplicity of scrambling, and my real passion is seeking out peaks about which there is little or no information and trying to find ways up them. Whether it turns out to be a hike or an exposed Class 5 scramble doesn't really matter; what matters is the experience of finding my own way.

Therefore, a lot of southern Utah's most spectacular peaks are closed to me because they are Class "5.Rope." Studying Pectols Pyramid using pictures and maps, I held a slim hope that I could get up it one of two ways; neither looked easy, but both looked potentially doable.

The purpose of this trip report, then, is to provide some information about two routes that will get a suitably skilled and equipped climber to the top. Ultimately, the climbing became too difficult for me to continue on, and I do not feel I got close enough to the summit to warrant creating a mountain/rock page. However, consider this a de facto mountain/route page until someone who has completed a climb here puts a more comprehensive page up.

From car to summit, straight-line distance is maybe half a mile, and the elevation gain is about 900'. The real climbing will be about 400'. 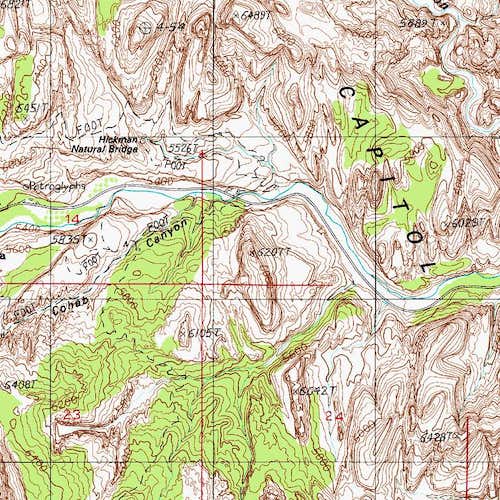 Pectols Pyramid is Point 6207T, just across the road from the TH for Hickman Natural Bridge.

Eastern face, with most of the north ridge visible
This is the route I looked at quite a bit at the beginning and end of the Navajo Knobs outing. With no doubt at all, I could see that the route was at least Class 4 and likely a good bit harder, but it seemed like something I would have a fighting chance with.

To reach Pectols Pyramid, I parked at a turnout just across the road from the trailhead for Hickman Bridge-- this trail is about 1.5 mi east of the visitor center-- and started hiking up the trail for Cohab Canyon. At this point, Pectols Pyramid is directly above. Less than a mile along, I found suitable terrain that allowed me to access the base of the peak. Then I found that there was no good way to access the north ridge directly from its northern end, so I hiked around to the eastern side. There, I found a convoluted route with Class 3 and 4 scrambling that got me onto the north ridge. 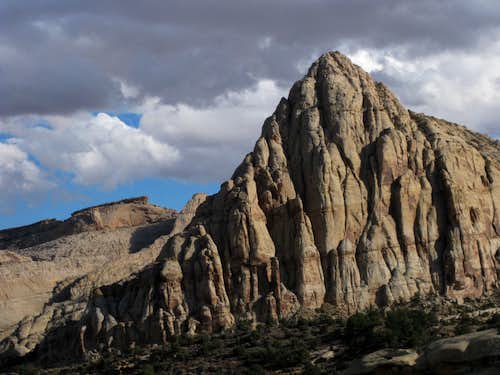 Pectols Pyramid and its northern ridge (left)
On the north ridge, I was able to get close to halfway up, encountering conditions mostly of Class 4 and the harder end of Class 3 but also some "easy" Class 5, with increasing exposure, until a combination of increasing difficulty and exposure told me it wasn't worth risking my life for this, especially when I hadn't yet scouted the peak from all sides. As I looked up the rest of the route, I had to guess that what lay ahead fell into at least the 5.6 or 5.7 range. A look at the photograph above, especially when using the magnifier feature, suggests it is harder than that. Also, it is apparent that there is at least one potentially problematic notch to negotiate.

Now in all honesty, I should admit that I am not as experienced on sandstone as I am on other rock types. Sometimes I love climbing on sandstone for the gritty feel and all the cracks, and sometimes it scares the hell out of me when the surface seems more sand than stone and when holds crumble just as I put some weight on them. So what I'm saying is that a true desert rat might find the rest of the ridge much easier than it seemed to me.

As far as placing protection goes, I'm not sure how friendly the route would be. The ridge didn't seem to have many cracks and flakes, and since installing new bolts is illegal in Capitol Reef National Park, it may just be that anyone wanting to climb the north ridge is going to have to solo it. 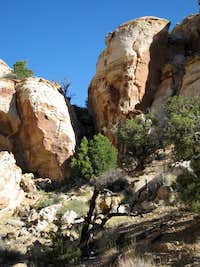 How I accessed the east side from the south 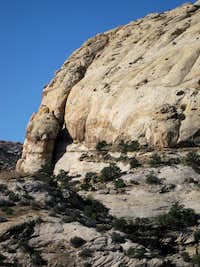 The chimney
The second route I wanted to explore involved a saddle just west of the middle of the peak. Although contour lines on the topo maps suggested it might be possible to scramble from the saddle to the summit ridge, being there in person instantly told me such would not be even remotely feasible.

Rather than turn back and go find something else to do, I decided to at least make a complete circuit of the peak for two reasons: the off chance that I would find another promising route, and to see and appreciate the peak from all sides.

Thus, I descended from the saddle and rounded the south end of the peak (where a number of solid technical routes were apparent even to me) and began making my way along the eastern side back to the point from which I had ascended to gain the north ridge.

Close to the southeastern corner of the formation, I spotted a chimney about a hundred feet above me, and the chimney appeared to reach the summit ridge or get very close to it.

Getting to that chimney was not easy. It involved a short exposed traverse that was not technically difficult but which many people would find unnerving. The last part to reach the chimney itself was like a friction climb, with no real footholds to speak of and some semi-decent handholds.

The chimney...again, experience obviously matters. Without a doubt, it becomes a Class 5 affair very quickly. Without a doubt, experienced canyoneers would find it easier than I did. In short order, it narrowed to the point of being just wide enough to accommodate a lean body (I am 6' and about 180 pounds, though on Saturday and Sunday mornings I am often closer to 185), and what had been an enjoyable stemming exercise became a trickier chimneying one.

The reason that I turned back finally was not that I was so worried that I couldn't climb the ever-narrowing chimney but rather that I realized a fall would almost certainly leave me stuck and alone in a spot few if any ever go to. Even if I have the resolve to do what Aaron Ralston did, and I seriously question if I do, his now-famous method of extraction was not an option since I had flown out carry-on only and thus couldn't have had a knife. (Then again, when you consider what people have got past the TSA regardless, well...)

For all I know, the chimney ultimately becomes too narrow for a human climber. But someone more adept at that kind of climbing than I am will have to be the one to find out. Or so I hope. 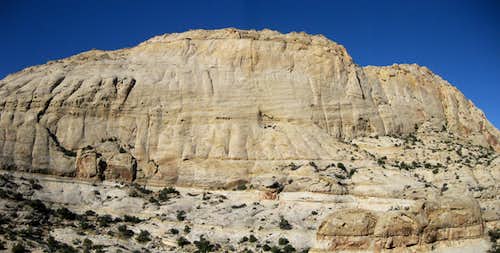 Eastern face, with the southern and northern summits visible

The Fruits of My Labors

So what did I get out of this if it wasn't a summit?

Well, I wrecked my knee, for one thing. Climbing down from the north ridge, I slipped and twisted my right knee badly. It was enough to put me on my ass, and intense pain came right away. Soon, I was back on my feet and continuing on my way with some discomfort but no serious trouble. But a little after my experience in the chimney, the knee started stiffening up and became much more painful. I was back to the car within an hour, and shortly after that, the knee was so swollen and painful that I couldn't muster the will to bend it; getting in and out of the car, and getting into or out of any other seated position, I had to bend it with my hands.

Doing a little research online that night, I came to the conclusion that I probably had a meniscus tear. The symptoms all fit, especially the one about people with tears frequently being able to move about freely for a few hours before severe swelling occurring. What sucked even more was that the next day, my 40th birthday, I was relegated to being a hobbling windshield tourist. By late afternoon, the knee was improving to the point that I could have forced a short hike or scramble, but I decided to wait until the next morning just to be safe. It was a good decision, for I was able to fit in three more short hikes/scrambles before flying back home. I know any medical professional reading this might say I was a fool for not staying off the knee and even more foolish by doing some climbing on it, but I just had to do it. Soon, I'll be seeing an orthopedist about the knee, which hasn't healed, another big sign of a meniscus tear.

It wasn't exactly the greatest portent that I spent my 40th birthday crippled, though.

Still, there were good things about the day. I got to add to my climbing experience and skills a bit when working in that chimney. The scenery was fantastic. And it was a warm, sunny day in southern Utah and I was outside in it. What could be so bad about that?

A visit to Pectols Pyramid, even just to circumnavigate the base, means that almost every step is off-trail travel. In turn, this means that you will frequently come across the biological crust that is so critical to the ecosystem out here. Please avoid stepping on it as much as possible even if it means making your path a little more winding than you would like it to be.