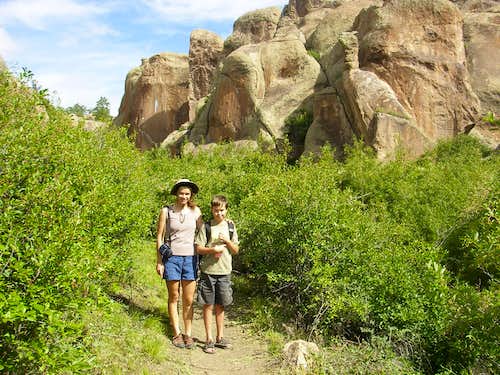 Me and my son at the entry to the canyon
Penitente Canyon is hidden in the low-browned volcanic foothills on the western side of the broad San Luis Valley in south-central Colorado. It comprises along with the Rock Garden, Witches' Canyon, and Sidewinder Canyon, one of Colorado's most unique climbing areas. The area is also great for hiking and mountain biking.
The canyon itself is part of the La Garita Caldera, a volcanic eruption that occurred in the San Juan Mountain about 26-28 million years ago. The resulting deposit is called Fish Canyon Tuff, which is volcanic ash molded together. The resulting geological formations are ideal for rock climbing.

Years ago, Penitente Canyon served as a place of worship for Los Hermanos Penitente - the Penitent Brothers, that's how it got its name. The Brothers, Spanish and Indian men of deep faith, preferred to live secluded in the foothills and canyons of the San Juan and Sangre de Cristo Mountains. The famed Virgin painted on a cliff in the middle of the canyon was created by one of the Brothers, who supposedly sat in a suspended auto tire to paint it. Unfortunately, vandalism caused some of the damage on the painting a drank man with a pistol decided to use the painting for target practice, completely obliterating the face and leaving pockmarks in and around it.
The area is part of the 7.529 acre Penitente Canyon Recreation Management Area of the BLM. Volunteers have helped install barriers to designate parking areas, campsites and trails.

There is a painting of the Virgin Guadalupe part way up one of the rock faces - Virgin Wall. The sign by the picnic area says that it was painted somewhere between 1940 and 1980 (wide range) by 3 local men. Two of them signed the rock near the bottom and there's a faint inscription around the virgin saying "Consuelo y Espiritu" (Comfort and Courage). The locals have this story: "Around 1937, some members of the Penitente Brotherhood roped up and painted the Madonna on there on the wall." The devout artists sat in tires suspended by a cord, painting an image for its secretive followers.

Penitente was discovered by rock climbers in 1985. Although relatively shallow, the canyon is enclosed by sheer cliff faces nearly 100 feet tall. The routes range from 25 to 75 feet long, with most tending toward the short side. It is mostly a sport climbing area with a high concentration of routes and an easy access. Watch out for rattlesnakes in the summer.

"I have visited this place twice, each time for an overnight trip. My first trip was peaceful and the place was uncrowded - the mid of the week, my second trip over the Memorial weekend was crowded, the campground was completely full and it was nearly impossible to get on most of the classic and easier climbs. I was thinking never ever come here over a 3 day holiday weekend. The canyon also appeared smaller to me". 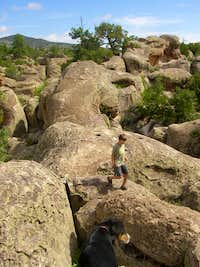 From the town of La Garita (located west of U.S. Highway 285 along Saguache County Road G), briefly travel west on County Road G until you turn left (or south) at the fork in the road, where it becomes the unpaved County Road 38A. Travel approximately 0.5 mile to the turn-off to Penitente Canyon. Follow the dirt road for 1 mile o the canyon entrance and parking area.
The road is well kept and easily accessible by 2WD vehicles. There are sings for Penitente Canyon. 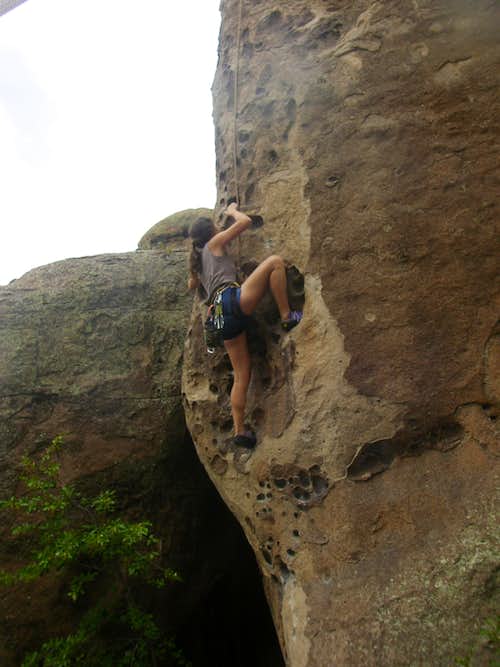 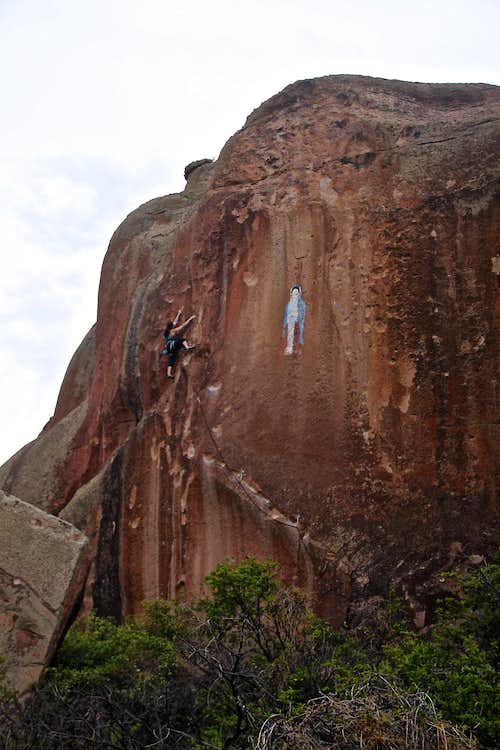 Los Hermanos de la Weenie Way 5.11c
Short bolted routes line the volcanic walls of Penitente Canyon. There are a very few trad lines. The rock is high quality volcanic cliff. There are more than 300 routes at Penitente Canyon and the close canyons: Rock Garden, Witches Canyon and La Garita Wall.
High quality but short pocket routes offer load of fun in this mysterious canyon. Routes are bolted, and there are fixed anchors on the top.
Guide books: "San Luis Valley Rock Climbing and Bouldering Guide" by Bob D'Antonio, Chockstone press, 1994
"Rock Climbing Colorado" by Steward M. Green, Falcon guide.
There are nearly 300 routes, most of them located on the sunny north side of the canyon. The routes near the entry are slightly more difficult, ranging 5.11s and 5.12s. But further inside the canyon are multiple routes with much easier grade, there is even one 5.2 bolted route - Mr. Breeze. The easier routes "The Serpent" 5.7, "Mr. Wind" 5.6, and "May-B-Nueve" 5.8 are often busy on weekends. We were not able to get on any of those routes due to crowds on our last visit. Most of the routes are difficult, and some of the classics may be slightly polished.
The history of climbing in Penitente Canyon is short. In 1984, two men jogged through the area. "I knew it was special," said Bon D'Antonio, one of the joggers. "Really good rock, excellent climbing. Just really unique." D'Antonio climber known for first ascents at Shelf Road near Canon City, would spend years exploring, trail building and establishing routes in these canyons. And he wrote a guide book as well.

The campground is managed by BLM (Bureau of Land Management, Saguache Field Office), and it is open year round. Reservation are not accepted.
Water is available from about May 1 to October 1. There are toilets on site. Watch for rattlesnakes in the summer (my son nearly stepped on one).
There are 18 walk-in and 5 drive-in overnight campsites for 11$ per night (2 tents or 1 camper), and there are 2 group sites for 15.00$ per night (up to 5 tents). Day use is free.
The campground can get very hot in the summer.
La Garita town has a gas station, but no grocery store, so plan to stock up in Del Norte. As of May 2013, La Garita offers breakfast for climbers in a little restaurant.