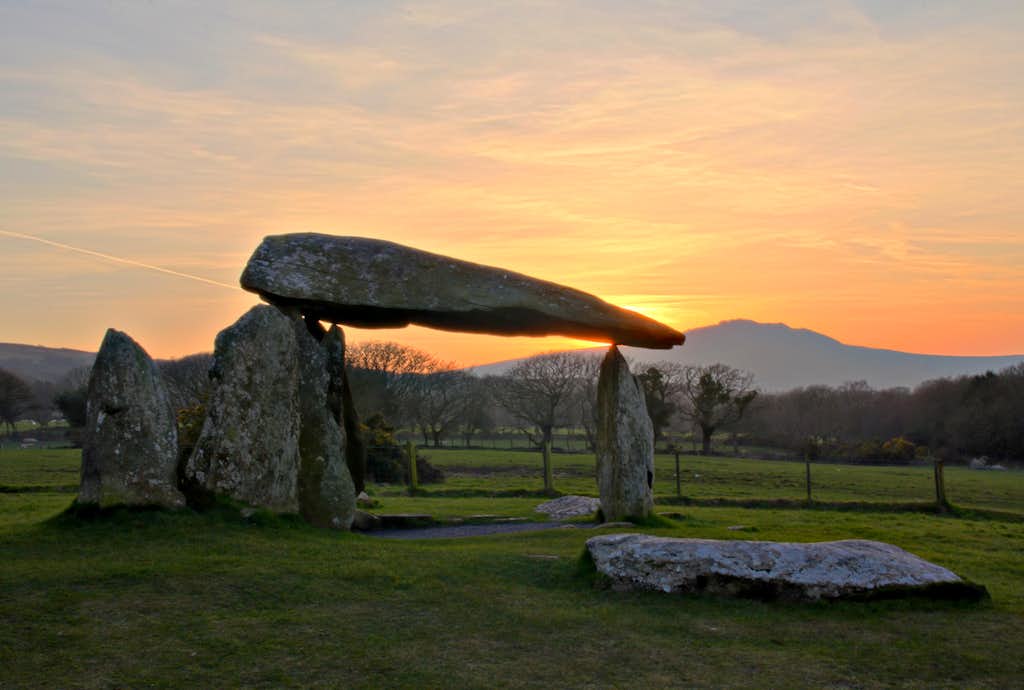 Pentre Ifan is Wales' largest and best preserved Neolithic chambered tomb of the so called portal-dolmen type. The dolmen dates from approximately 3,500 B.C. and was used as a communal burial site. The existing stones form the portal and main chamber of the tomb, which would originally have been covered with a large stone mound about 36 m long. Some of the stones have been scattered, but at least seven are in their original position. The capstone is 5.1 m in length, and is estimated to weigh 16 tonnes. It is delicately supported by the narrow tips of three uprights. The facade surrounding the portal was built with carefully constructed dry stone walling. In 1884 it was the first monument in Britain to become a Scheduled Ancient Monument, on the recommendation of General Pitt Rivers. Original sketches from that period are shown here. Local folklore says that sometimes fairies, or Tylweth Teg, are seen here: they are described as 'little children in clothes like soldiers clothes and with red caps'.

This is a very good and well composed picture. I love the way you have framed it...! One question. Was it done a muliple of exposures...? The only reason I ask this is the foreground, main features and the background are all in harmony with each other.
Cheers - David.

Hi David, thanks for the comment. You have a good eye, yes this is a composition of three exposures - the result of my first attempt at HDR photography as it happens.

Something I am also just getting use to doing. The results are quite something and for your first attempt well done. I have just uploaded an image I took in HDR using 5 exposures via this link.
http://www.summitpost.org/image/566806//garalet-hill-and-talla-reservoir.html
Again well done for a good picture.
David.

My hat is not red so it looks like I can't pass for a fairy but there's some new research pointing to the Celts having trekked from what's now Turkey, then along the northern coast of the Mediterranean Sea to Britain, and later back east to Central Europe and my beloved Carpathians, so I guess the colours may have changed along the way.:) Anyway, I thought this text about myths and Britain might go well with this pretty picture of Pentre Ifan.
Cheers,
Jacek

Hi there, thanks for the article it was very interesting. The Celts do seem to have gotten about quite a bit.