Pointe Percée is the highest summit of the Aravis. 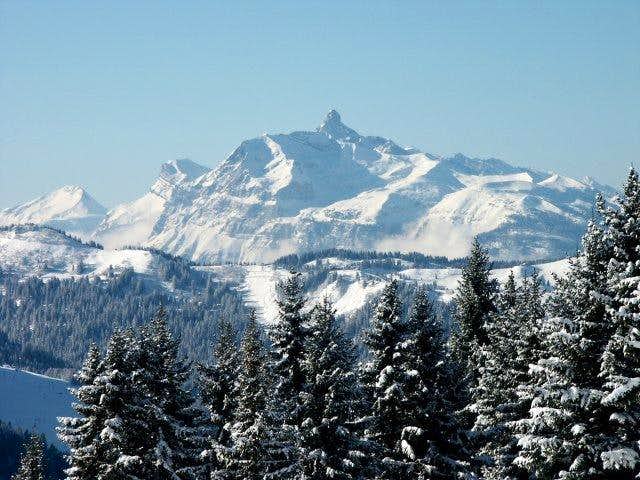 Pointe Percée seen from Les Gets


Aravis are a part of the Bornes prealps, situated between Arve and Annecy, in the north west of the Arly Valley and facing the Mont Blanc massive. In the north, the Col de la Colombière separates the Aravis Chain from the Bargy. In the middle, the Col des Aravis (1498 m) is the only point of weakness.

The daring limestone crest of Aravis (urgonian) culminates at Pointe Percée which dominates Sallanches from 2000 meters. Pointe Percée is sometimes called Matterhorn of the Aravis.The part of the chain between Pointe Percée and Cluses is called Chaîne du Reposoir. - Normal route for hikers : Gramusset Hut route 2,5 h
Climb the big comb through plates and falen rocks. Follow a gully to the top (often hard snow). A nice ridge leads to the summit.

- Chimneys of Sallanches : Doran Hut route 4 hours
Climb the comb of loose stones (path with "D" marks) to the collar of Doran (2178 m).Here begins the climb over the slopes "les Verts", steep and slippery. Don't climb to the collar of "les Verts". You must climb direct through the chimneys of Sallanches. The first chimney is the most impressive. After 3 chimneys you reach the normal route of Gramusset.

From june to october (if snow free).

Rope of 30 meters, some karabiner

- The summit was probably climbed very earlier. It was related the debauched monks climbed at Middle-Ages to erect an iron cross for expiation. For this reason, the summit was a long time called "Iron Cross".

- The present summit cross was erected in 1996 in memory of the monks murdered in Tibehitine (Algeria).

Near the Pointe Percée, Reposoir is a monastery which was founded in 1151 on a field in waste lands, by Jean of Spain, monk of Spanish origin come from Grande Chartreuse. The Carthusian monks emphasized it and allowed the rural life which gave the current village of Reposoir, located between the town of Cluses and the collar of Colombière, in the chain of Aravis. In 1151, the Jean Carthusian monk of Spain, reaching the mountain pastures of Duche in a state of total exhaustion, and having been reinvigorated by spring water, crossed the collar of Annes and reached the field in waste lands where it founded the monastery. The source was baptized Bénite-Fountain, became during a certain time a place of pilgrimage, and in 1671, the vault of Duche was built, dedicated to Ste Anne, in edge of the way which leads to the collar of Annes. Chartreuse of Reposoir functioned during several centuries without major problems, with restorations in 1686 and 1717, until the Revolution, where destruction and plunderings occurred. In 1901, the monks were expelled and the buildings were transformed into hotel. Alexandra di Rudini, girl of Italian a Prime Minister, repurchased and makes restore the buildings in 1922. In 1932, the monastery became Carmel and today a score of Carmelite nuns lives within this splendid peaceful framework which deserves its name well.

In the region of Reposoir and of Doran live Lammergeier.
The Lammergeier or Bearded Vulture, Gypaetus barbatus is an Old World vulture. It breeds on crags in high mountains in southern Europe, Africa, India and Tibet, laying one or two eggs. The population is resident.

Like other vultures it is a scavenger, feeding mostly from carcasses of dead animals. It will drop bones from a height to crack them to get at the bone marrow. Its old name of Ossifrage relates to this habit. Live tortoises are also dropped in similar fashion to crack them open.

Unlike most vultures, Lammergeiers do not have a bald head. This huge bird has a 2.5m wingspan, and is quite unlike most other vultures in flight due to its long narrow wings and wedge shaped tail.

Adults have a buff-yellow body and head, the latter with the black moustaches which give this species its alternative name. Tail and wings are grey.

Juvenile birds are dark all over, and take 5 years to reach full maturity.

Lammergeiers are silent apart from shrill whistles at the breeding crags.

Etymology
The name of the Lammergeier originates from German Lämmergeier, in which language it means "lamb-vulture".

Miscellaneous
According to legend, the Greek playwright Aeschylus was killed by a tortoise dropped on his bald head by a Lammergeier who mistook it for a stone.