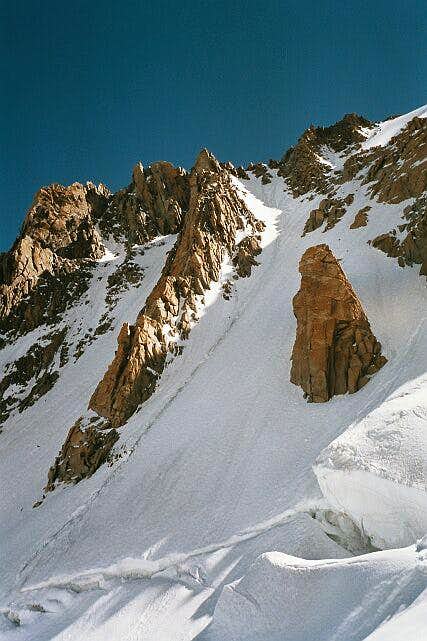 Well done on your new route on Mont Maudit - looks like you had a fun day out on the mountain!

Given the long history of climbing on the Mont Blanc range, I'm surprised that there is still much scope for putting up new routes, but it looks like you found a nice line.

Re: New route on Mont Maudit

yes, it was really fun, all the 3 days. It could have been harder, but we enjoyed, that it was just an enjoying climb. First, we wanted to make (a longer) route in the NW-face of Mont Maudit. But eventually we found an info, that this route was already opened. It was also a very logical route, which you can even see down from the valley. But in the WSW-face, there has not been opened any route before. (There are still plenty of routes to open in the Mont Blanc Massif ... some more and some less logical routes.) It's just quite an effort, to get there. Because of the danger of avalanches and falling seracs, it's too dangerous to ascend directly from Ref. Grandes Mulets over the glacier. You could climb Éperon Gousseault maybe without bivouacing, if you come from Ref. Cosmiques with the Mont Blanc climbers, that means, if you start at 2 a.m. or so. But we wanted to have fun ..... so we preferred the bivouac and to sleep longer ..... And it was really nice up there. I can recommend this, if you want to experience Mont Blanc lonely. BTW: Ivano said, that it's allowed to put your tent everywhere up there in the mountains for one night. But in the morning, you have to pack your tent together and to put it to another place the next night.