This route ascends Hochtor from the North.

In the main valley (by the river Enns) the trailhead is on a big parking place (altitude cca 600 m), Haindlkar.

A well marked path leads towards the South to Haindlkarhuette, 1121 m (1 h 15 min). The majority will probably sleep there. But if you proceed by the marked path, named Peternpfad towards the East, you will after less than an hour reach the NW wall of Hochtor. Just among the last larches, approximately 50 meters above the path you will find a good, flat place for two persons, where you can spend the night. So next day you can start a bit earlier, and sleeping in nature is more beautiful anyway. 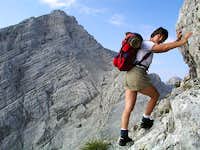 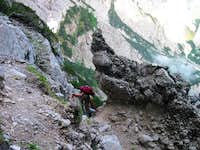 Peternpfad enters the NW wall of Rosskuppe, 2152 m and Hochtor in a steep gorge, but the route soon exits it and climbs over the rocks left of it (looking upwards). Difficulties are constantly in the range between I. and II., the route is marked, but not secured with any kind of steel. So you climb over pasages, by ledges and after some 30 minutes the route turns left, out of the wall, and reaches a beautiful balcony, from which the Enns valley can be clearly seen.

Now a steep part comes again, overcoming it you find yourself under steep walls, but the route goes leftwards around the corner and exits by a comfortable ledge on a wide, grassy Peternscharte, 2040 m. Till there over the wall 1 h 30 min.

On Peternscharte you turn sharply right, where on the first rocks you see red marks. You proceed below these rocks, by the ridge and over the next rocky barrier (II. degree) and scree reach the sharp Rosskuppe, 2152 m. The further route is clearly ahead of you. 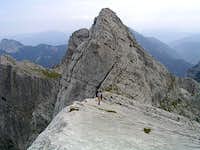 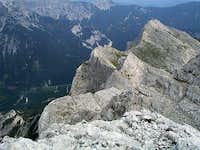 First you need to descend down to Dachlgrat. This descent is exposed and requires climbing II. degree downwards (belaying?). The Dachlgrat is a beautiful karst formation. Not very steep compact ridge is falling towards the NW almost vertically some 800 m in Haindlkar and much less steep towards the SE. The ridge is all erased, carved by water. Climbing it is easy - you just go upright over it.

The next peak in the ridge you don't need to ascend, the route detours it on the left (SE) side again. Over some scree the route now reaches the summit rocks of Hochtor. Climbing in II. degree starts again. So you gain height and the route uses ledges also to find the best passages. On one place a ledge is narrow and an overhanging rock makes you go on your knees. There a small rucksack is a great benefit. After this "Passo gel Gatto" (like on Monte Pelmo) the rock soon becomes easier, you gain height and soon see people on the main summit. But before reaching the top, you must reach the fore summit and then descend a little to the notch between both of them.

The Legend of Black Peter

To the locals, the wild world of rocks, larches and dwarf pines above Gstatterboden was not much appealing. So, how only would they look with trust on a man with face black of gunpowder and with a foldable gun under his coat, squandering up there? Black Peter was a true mithological creature. Each time when hunters just managed to chase him to the vertical walls, he simply disappeared, like being swallowed by the Earth! Abd then he soon appeared again, in the hunting plces of Johnsbach, or elsewhere.

But also Andreas Rodlauer (1830 – 1914), the forrest manager from Gstatterboden, did know the passage through the curse of vertical walls between Planspitze and Roßkuppe. The famous Heinrich Heß valued him as a reliable mountain guide. So, he hired Rodlauer in 1877 to lead him from the northern side on Peternscharte and further on Planspitze.That's how the famous route was created.

For the whole route, poles are recommendable. In the climbing part, they go on your rucksack, of course. Depending on your climbing skills you might also need a 20 m rope. On the day we climbed Hochtor only one party out of four or five used it.