After crashing after our climb of the Ellingwood Arete, I was on the hunt to find someone to climb with for the 10th of June. I still need to get phone numbers from friends in Colorado I still need to climb with lol! So I glance on MountainProject and see someone else in Colorado for a short trip and oddly enough also has a flight back home the 11th. I give him (Jeff) a call and it turns out he is really interested in heading up into the mountains for a night. Only problem is that since we both flew into Denver (I flew in from Seattle, he came in from Boston), neither of us had a car. So I scrambled for a way of transportation and after an hour or so I gave up on the idea of borrowing a car. Stephan agreed to take me to Boulder (where Jeff was staying) and drive us both as far as Lyons where we would hitchhike to the Glacier Gorge Trailhead in Rocky Mountain National Park. Upon reaching Lyons we loaded our packs and stopped at the town market for some food. After about 5 seconds of hitching an awesome guy in a huge black truck picked us up. He was really nice and fun to talk with. He even ended up taking us right to the trailhead! How cool is that

So we started hiking up the trail towards Loch Vale around 4pm and was completely surrounded by tourists. It was a Sunday afternoon after all and we must have passed over 100 people hiking down the trail! Once we passed Alberta Falls though there was much less people. Before too long we arrived at Loch Vale where the snow started to cover the trail. The lake was melted out completely but the trail was covered in many spots. Luckily it was all firm and we didn't sink much at all. The evening reflection on the lake was beautiful.

Once we made it around the lake we continued following the well beaten path through the snow up towards Sky Pond. The final ascent wasn't real steep at all and we made it to the upper pond which was still about 50 percent frozen shortly before the sun set. We located a sheltered spot to bivy and ate some much needed food. What a beautiful place to be for sure. It was a breezy but clear night and the forecast called for mostly sunny skies the next day and since it was a Sunday night, we had the place to ourselves!

The next morning I looked out of my sleeping bag to see a glorious sunrise on Petit Grepon. I photographed it right from the ground where I was sleeping but since we both were still tired we agreed to sleep another hour or so before getting up. It was still breezy and chilly as well. Once we finally mustered up the courage to get up we divided gear and loaded my poack with all the gear we would need for the day and put the rest of the gear into Jeff's pack which we left high on a rock so no frekin' marmots could get to it.

We hiked a short ways up some talus to the base of the south face route. There was some lingering snow right below the start of the route which was interesting to negotiate without an axe or any traction. We ended up traversing from the right along the small moat until we got to the first pitch. Here I left my approach shoes and Jeff kept his which we loaded into my pack. We racked up and changed into rock shoes and I led the first easy pitch. This was probably only 5.4 at the most and veered back and forth up a large chimney. When the rope drag became bad I set up an anchor on a gigantic grassy ledge and belayed Jeff up. By no we were at the base of the huge chimney in the middle of the lower south face. This chimney is clearly seen from afar. I also led the 5.6 second pitch up through this chimney and out to the left when I reached the top. There was a couple slightly overhung moves exiting the chimney but the holds were fantastic. I arrived at a small ledge with a fixed cam and added a couple pieces to make a solid anchor. Jeff came up nicely complaining about my difficult to remove nuts but he would return the favor as he led the 5.7 third pitch. This pitch climbed the leftward leaving crack through the face and up to a huge ledge. This was also the first pitch I had to carry the pack to which I heavily complained lol. Going through the leaning crack with the pack on was awkward to say the least. I made it up to Jeff without too much trouble though.

We took a short break and I started leading up the 4th pitch which is rated 5.6 and I would agree to this rating. There was only one spot on this whole pitch I would have considered difficult at all. Most of it was blocky low 5th scrambling. I arrived at a right trending ledge where I found two pitons to use as an anchor. Right above me was the crux of the entire climb...the 5.8-5.9 fifth pitch. I belayed Jeff up and he prepared to lead the crux pitch. He did a great job working around the awkward roof and up the finger crack to the big ledge above. Following this with the 30 pound pack was no fun and I ended up taking a couple times since the high elevation pumped me out faster than I was used to. 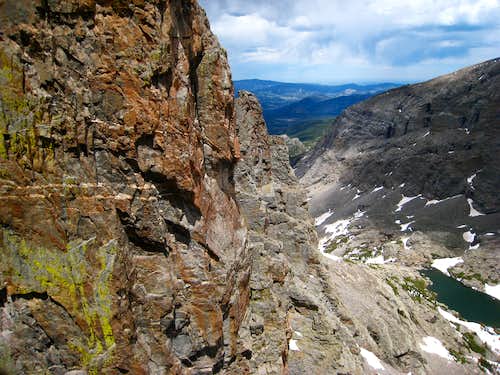 Looking down the valley with part of Sky Pond

After I took a quick rest, I started leading up the 6th pitch which was mostly a blocky pitch with a couple stiff 5.7 moves. I knew I had to get to the "Pizza Pan Belay" which is right on the crest of the arete. I ended up traversing left to the arete too soon and had to continue up a section of stemming and finger cracks to the next ledge then traverse left. I knew it right when I saw it though and there really was only room for one person. I set an anchor and was able to use my number 4 cam in a big crack at arms reach in addition to the fixed piton. I belayed Jeff up, took the pack and he continued up the 5.7 rated 7th pitch which was an awesome pitch! I wish I led this one since it was my favorite pitch of the entire climb. From below it looks very hard but it's just one jug hold at arms reach after another! A series of 3-6 inch ledges make great foot holds as well. At the top of this pitch we reached the crest of the ridge with only 50 or so feet to go. Jeff finished the last bit to the summit which climbed a series of easy 5.6 cracks to the right of the ridge to the very top of the tower. I followed and we rejoiced on the tiny summit. What an awe inspiring place we were in. This was certainly the longest most committing alpine climb I have done to date. It was however getting late and we still had to rappel and hike out before dark in hopes to catch a ride out of the park.

Next came the dreaded rappels. I walked across the summit a short ways and found the first set of bolts. I had read that you should never rappel off of anything other than bolts. Instead of having two 60 meter ropes, we had one 70 meter and two thinner 30 meter ropes so we had to rappel single strand on the 70m and use the two 30m ropes as a pull cord and use a biner block. Unfortunately this takes longer as you cannot pull and feed the rope at the same time but we had to use the ropes we had. Contrary to what our descent description said, there were only 5 rappels and they were all very exposed raps! I went over the first one and kept a keen eye out for the next set of bolts which I found to my left. Luckily there was a nice ledge I could use to walk over. The second rap took us all the way down to a huge grassy ledge next to the deep gully separating Petit Grepon from the slightly higher tower to the east. We knew not to rappel into the gully so we traversed across the ledge to find the next bolts which were right above a v notch that dumped out onto the main south face. Clipping into these bolts was slightly exposed but not bad and I went down first again. Just below another big ledge I found the bolts for the 4th rappel which then took us all the way down to the big ledge at the top of the first pitch. The final, 5th rappel took us down to easy talus below the snow we dealt with that morning. I was even able to swing over and grab my marmot damaged approach shoes....FREKIN marmots!!! Reasons why I hate marmots lol.

From here we ran down the talus back to Sky Pond and sorted gear once again. Our ensuing hike out was a quick slog to which we reached the trailhead shortly after dark around 10pm. Unfortunately for us no one was there and we both had flights the next morning. We waited hoping someone would drive out for about an hour when out of the blue a car came driving out! A group of bouldering friends were headed back to Boulder and knowing they were the last car up there for the day they were able to fit us in. If you read this thank you very much! Once in Boulder Jeff was dropped back off and I continued back to Golden where the next morning I caught my flight back to Seattle. What a great way to end a short trip in Colorado! 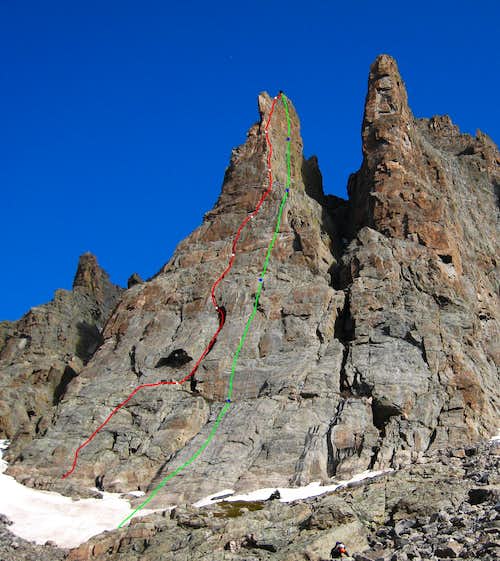 You burn the candle at both ends on these trips don't ya? :)

lol I guess! Thanks for commenting :)

That def looks like my kind of climbing.....moderate multi pitch alpine. Love your pics too....much better than mine for sure!

I was just reading your profile, some interesting coincidences; you live in Renton, I grew up in Renton, you went to the School of Mines, my uncle got his PhD in ground water hydrology from there and my cousin (his) son teaches there.

Yeah that is cool! I think you mentioned before you grew up in Renton. Hope all is well and thanks for commenting!