Petzeck is the highest mountain in Schober group but it is not soo famous such as Hochschober (3240m), Boeses Weibl (3121m) and some other mountains. But anyway Petzeck is the beautiful mountain and from its summit you will have a great view on whole Schober group and all the main summits in Schober group, then the view on Glockner group (the N side), Granatspitze group (the W side) and Goldberg group (the E side). Like all Schober group, also Petzeck does not have soo many visitors as Grossglockner or Hoher Sonnblick. In this area you cannot expect the roads that bring you higher below the mountain or cable-cars.

Petzeck is nice mountain with alomst 1000 meters high north face which falls down in the valley Graden Tal. On the south side, Petzeck shows prettier picture. Over the south slopes and face goes the normal marked approach on the summit from the hut Wangenitzsee hut (2508m) where are located the highest lakes in Schober group, Kreuzsee (2483m) and Wangenitzsee (2465m). On the SW side below the west face of Petzeck is a glacier Graden kees, and below the east face is a glacier Prititsch kees. But if we want to reach the summit of Petzeck over the normal approach from the south we cross only the snowfield which is there whole year.

The normal approach on Petzeck goes from the valley Wangenitz Tal, crossing many beautiful meadows to the hut Wangenitzsee and then from there to the summit of Petzeck. The second possibility is from the valley Debant Tal over the notch Unt. Seescharte (2533m) and then descends down on the hut Wangenitzsee and from there so the summit. This approach is much longer then normal.

Some photos from the summit of Petzeck. 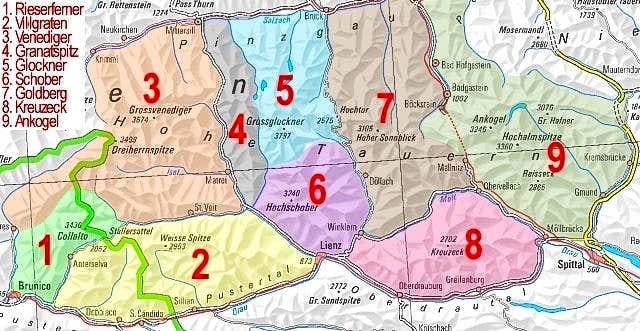 Lienz can be reached from north through Felbertauern tunnel, from south (from Italy) by the Drau river valley or over Staller Sattel (saddle), 2050m, or from east by the Drau valley - from Spittal, where you leave the Villach-Salzburg highway.

On-line, you can see a detailed map on: http://www.austrianmap.at/.

Approach from the valley Debant Tal over the notch Unt. Seescharte and then from the Wangenitzsee to the summit. Description .

No permits, no summit fees. You are in the Hohe Tauern National Park but climbing activity isn't restricted. But please take care of the beautiful nature!

The most of climbers ascend on Petzeck in snowless time, but not in very hot days. From the summit you can also ski but be careful on avalanches. 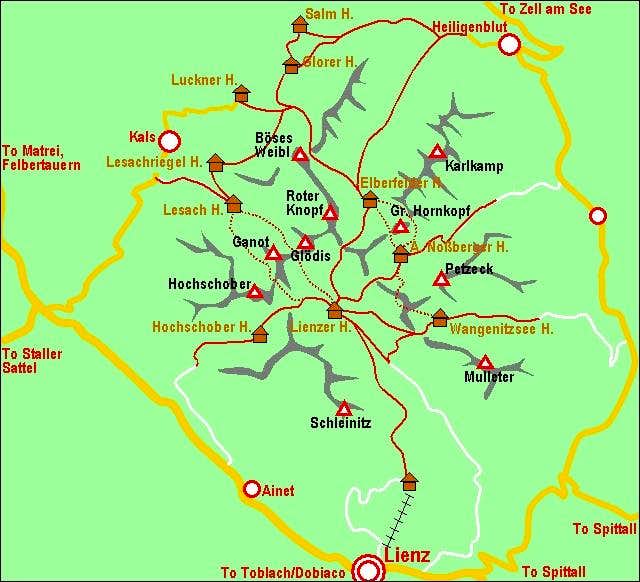 The map of mountains and huts of Schober group.

The most known tourist resorts in the region are:

Heilgenblut, Lienz, Kals, Ainet, and others.

I read in Planinski vestnik, our magazine, that there's also the third (or second) 'normal' ascent on Petzeck. From Adolf-Noßberger-Huette a steep couloir (50 degrees?) ascends up to the main ridge. Obviously this ascent is harder that the one from the south and requires also in summer crampons and ice-pick.