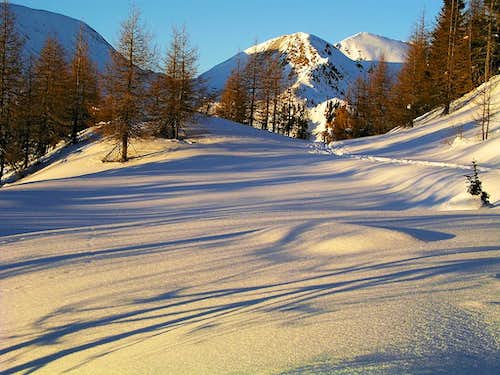 Pfannock is one of typical mountains in Nockberge - rounded, grassy, in summer easy to ascend, with two nice lakes in the valley south of it. But in winter it turns into a very rewarding ski tour goal. If we start from the ski resort above St. Oswald, 1319 m, and don't opt for Rosennock, the highest summit in the region, then Pfannock might be the goal for a nice ski tour - equivalently to the neighbouring Mallnock, 2226 m and Klomnock, 2331 m. Yet, its southern slope, the side from which we approach, is scaringly steep for a ski tour. It can be ascended with skis only in best conditions and with great care of not sliding down.

The usual summer and also ski tour approach goes over the SW ridge. In summer the second option to ascend the summit is from the Nockalmstrasse. Where this one descends from both culmination points into Grundtal, there's a nice Grundalm, 1688 m. In the big hut there's an open exposition of life in Nock forrests, part of the Nationalpark Nockberge. There the marked path to Oswalder Bock Sattel (saddle) statrts, from which the summit of Pfannock can again be reached from the southern side and by the SW ridge. The third option is not marked. NW of the summit there's Hofalmbach and Hofalm alpine meadow, from which we can ascend towards the south on Erlacher Bock Scharte (saddle) and by the SW ridge again to the summit. Also if we don't keep to paths and trails the terrain in Nockberge is mostly easilly passable, even in winter, so we can also do other routes.

As Nock mountains are scattered in the area and quite equally high, also Pfannock offers a nice panorama: We are standing in the middle of Nockberge, on the SW we see the broad Rosennock and all around in close neighbourhood other Nock summits. In the distance some main ranges of Alps can be clearly seen: Schladminger Tauern on the North, Hohe Tauern on the West and Julian Alps and Karavanke/Karawanken on the South.

1. From the south. Many marked paths lead to the mountain base from the south. They go either through Langalmtal or from the ridge of Brunnachhoehe to one of the two saddles, south of Pfannock: Oswalder Bock Sattel and Erlacher Bock Scharte. From there you ascend the summit over the SW ridge. Time depends on the starting point. Easy.

Ski tour from the south

You start on the ridge of Brunnachhoehe, 1902 m, (or in St. Oswald, 1356 m), by the upper station of the cable-car. First you continue a few minutes by the ridge towards the NE, then descend a bit to Bockhuette (mountain hut - closed in winter), cca. 1860 m. From there you comfortably ascend by a nice valley towards the North to Oswalder Bock Sattel, 1958 m. There you turn west. By the northern slopes of the fore-summit you reach a nice valley south of Pfannock. The two lakes are usually covered with ice and snow. There you decide whether to ascend the summit directly by the southern slope (very steep - some 35 degrees!) or go towards the West on the notch between the fore-summit and the main summit and ascend the highest point by the SW ridge. You best ski down by the latter direction, even if the SW ridge is a bit rocky. In good snow conditions also the southern slope is a good option for a good skier.

No limitations, but a great portion of Nockberge is a natural parc. For more details, see the official web site of Nationalpark Nockberge. The Nockalmstrasse is opened from May to October (toll!).

You can climb Pfannock in any season. For weather conditions for Austria see here (then choose regions: Steiermark and Kaernten). Avalanche info page is the following: Kaernten.