The following pictures were taken during a climb of the South West Ridge of Cholatse in 1993. Although it has been a long time since that expedition, Cholatse is not a peak that sees many ascents, and there is not an abundance of pictures out there showing the route. Our trip began when John Climaco was looking through an old American Alpine Club Journal and saw a picture of the peak and was overcome by a desire to visit the magnificent Khumbu region and attempt to climb the peak. The pictures below show the ascent made by John, myself, Andrew Brash and Chris Breemer on October 21st of that year, when we repeated the route climbed on the first ascent of the peak. 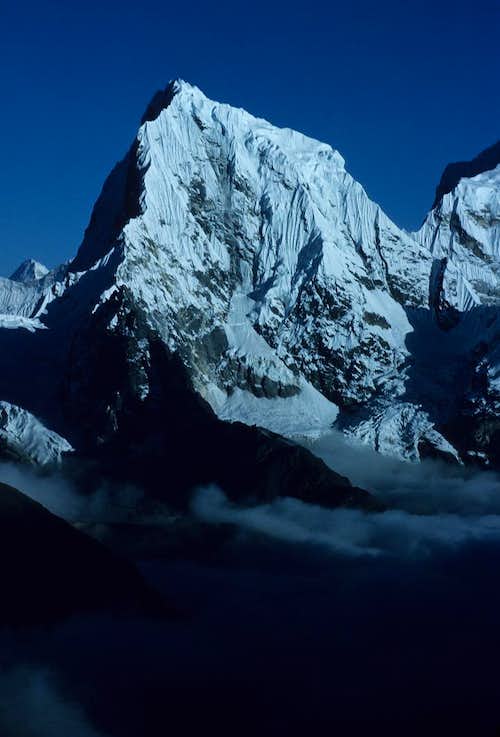 The West Face of Cholatse.

The route leads from the clouds up the glacier and to the right to the saddle at the edge of the page. We set up a camp here. The prominent Tower was then climbed with a second camp tucked in the small col beyond it. The steepest portion of the ridge was climbed to a third camp where the angle eases. Finally, these slopes were followed to the summit, with the descent back to base camp on the following day. 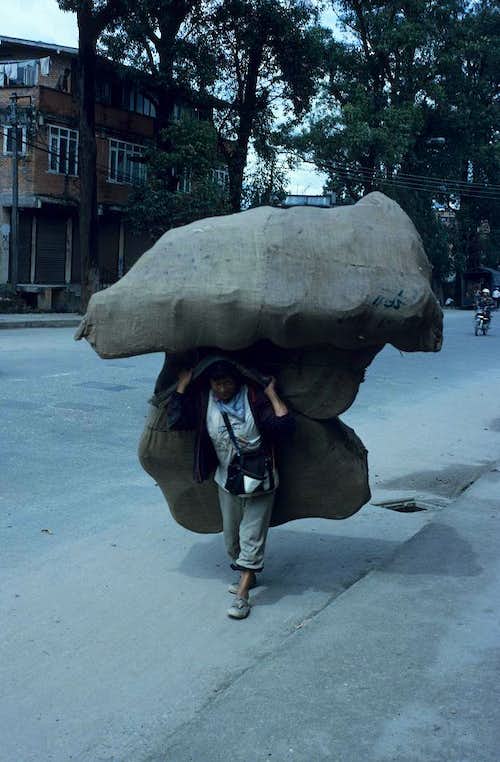 After the lengthy plane flight, we spent nearly a week in the monsoon rains of Kathmandu getting permits, organizing gear and supplies, and sightseeing in this magical city of snake charmers and temples, incredible beauty and also poverty. We then flew into Lukla and followed the Dodh Kosi river to the town of Namche Bazaar. 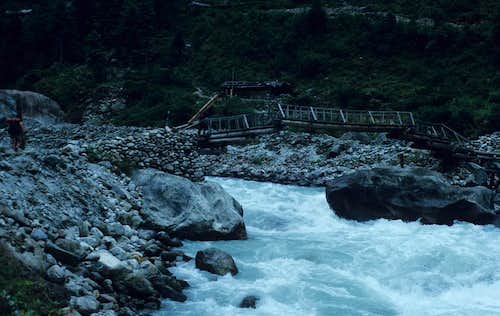 Bridge used on the approach.

After acclimating for a couple of days we then continued upwards and entered the beautiful Gokyo Valley. Not far above this picture, the land becomes much more alpine in feel, as the trees are left behind. 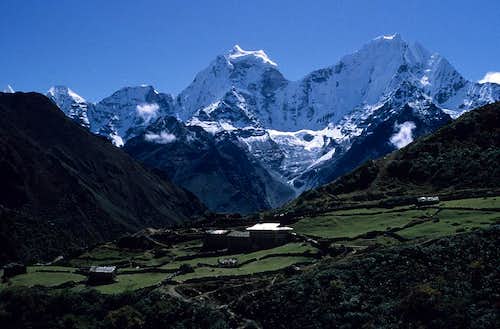 The town of Dole in the Gokyo Valley

Base Camp on the west side of Cholatse it tucked into a small valley above the town of Manchermo at somewhat over 14,000 feet. There are some startling towers above the camp, and immediately above camp, an old lateral moraine can be used to approach the glacier above. 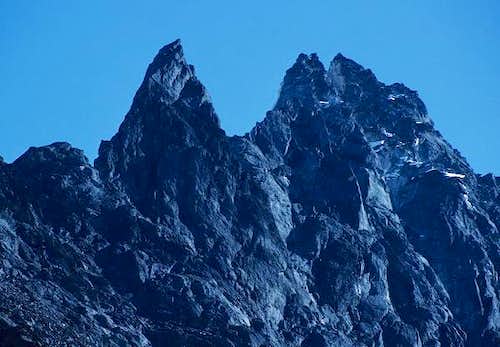 Towers above the base camp on the West side of Cholatse.

We set up an advance base camp just below the glacier on a moraine, then got hammered during the night by the wind blast from a huge avalanche coming down the West Face. The glacier has a small icefall visible in the first photo of the trip report. We climbed this on the side farthest from the mountain to stay as far as possible from avalanches falling down the face. Above the icefall, the glacier levels somewhat with spectacular views. The towers seen above base camp can be seen in this photo directly beneath Cho Oyu. 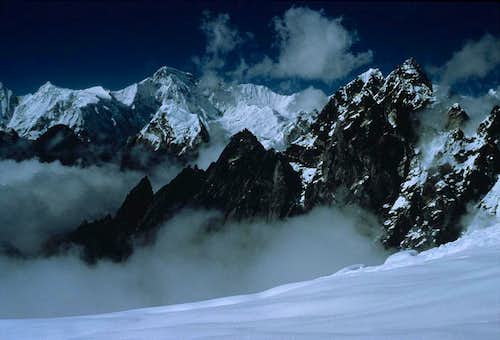 Cho Oyu from the Glacier to the West of Cholatse.

In order to get up to the saddle, a wild, fluted head wall must be climbed for several hundred feet. We placed a fixed rope here. 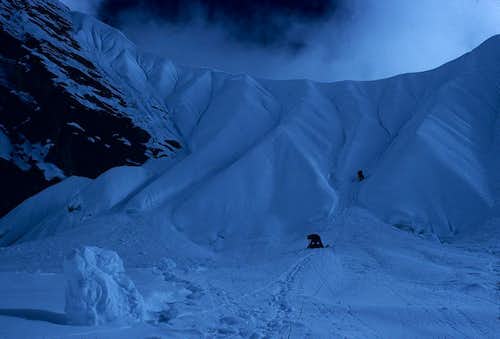 The saddle that is reached above the headwall makes a superb campsite! From here, we climbed increasingly steep snow up to the summit of a small but distinct tower on the ridge. In 1993, this climb was all on snow till the very summit. By 2004, much of this snow had melted away leaving poorly protected rock climbing as seen in Greg Sievers' Photo. We camped in the small col directly behind this tower and it was here that Chris found the old ice axe pick that broke off John Roskelley's axe during the first ascent. 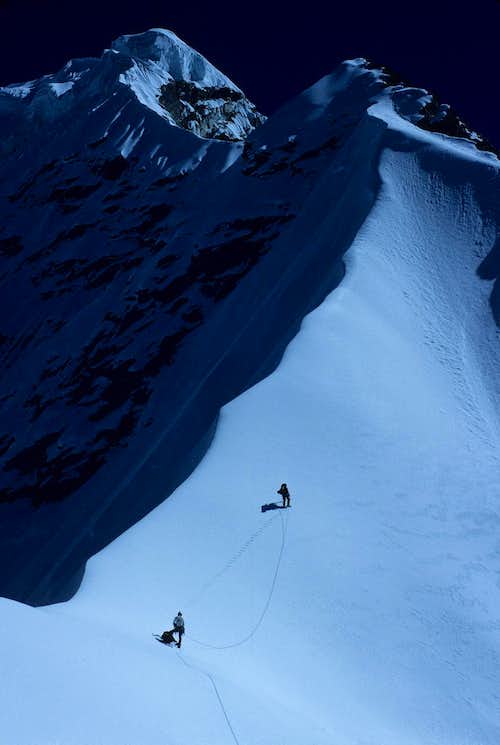 Climbing from the saddle on the South West Ridge of Cholatse. 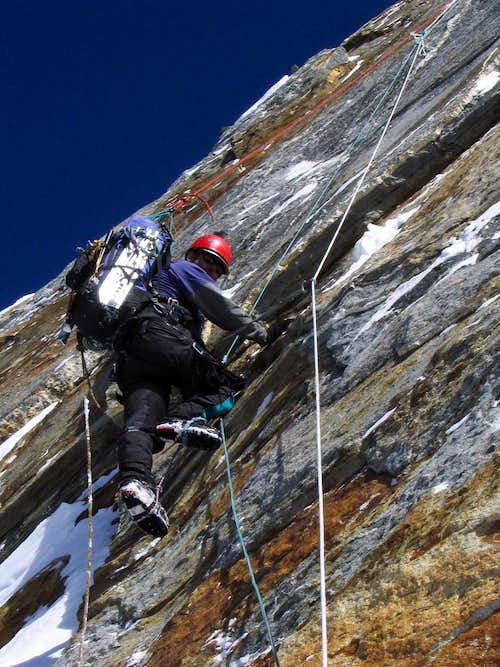 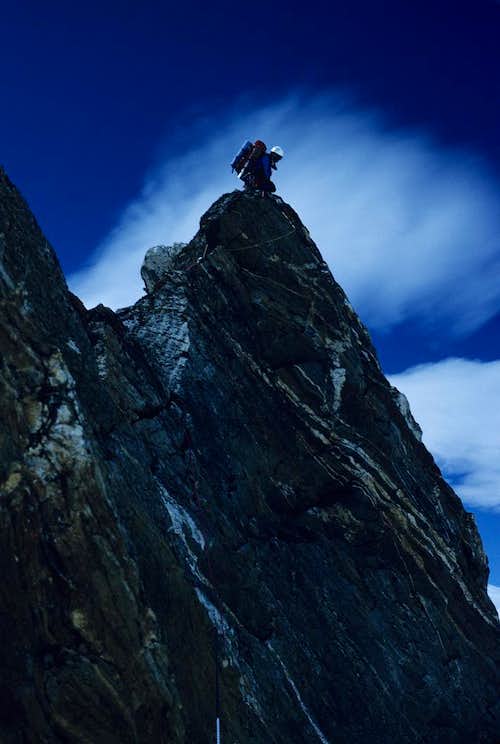 The same tower, At the summit of the Tower

We fixed ropes to this point, then climbed alpine style above the tower camp. Because the snow was softening up during the day, we climbed most of the ridge shown in this photo at night, emerging at the crux section at dawn. 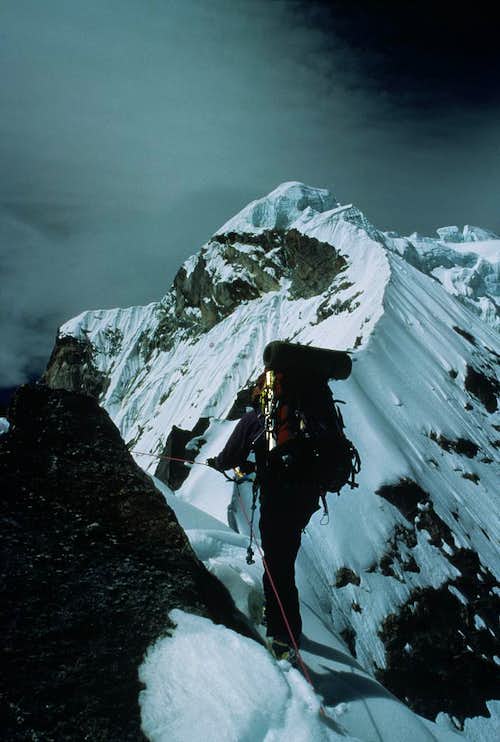 The same tower, At the summit of the Tower looking up the ridge, Photo by John Climaco

Just before the more gentle summit slopes are reached, there is a dramatic steepening of the ridge that Andrew Brash lead with a bunch of pickets and some ice screws as well. The first two pictures show the exact same stretch of ridge, the first from below, the second from above. We'd hoped to reach the summit that day but were tired after climbing during the night and camped one final time after one more long but easier pitch. 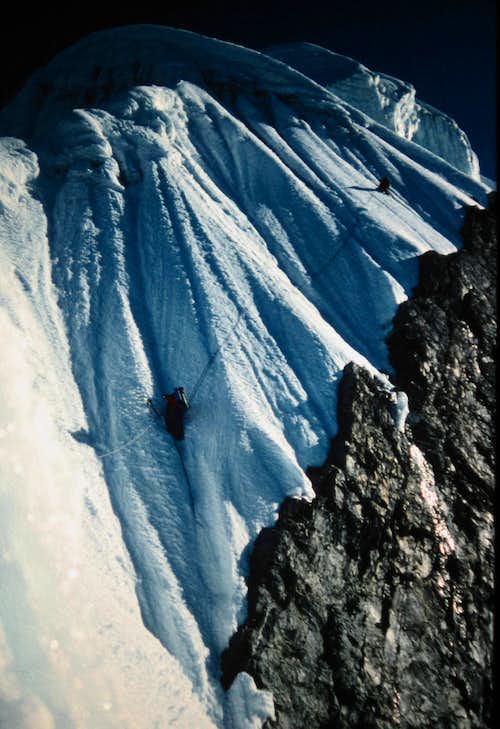 The crux of the South West Ridge, 1993 showing Andrew and Chris 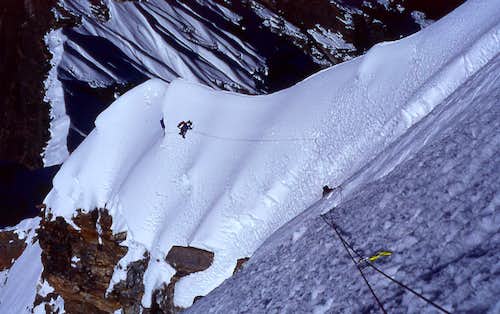 The crux of the South West Ridge, 1993, looking down the Ridge. Photo by Andrew Brash 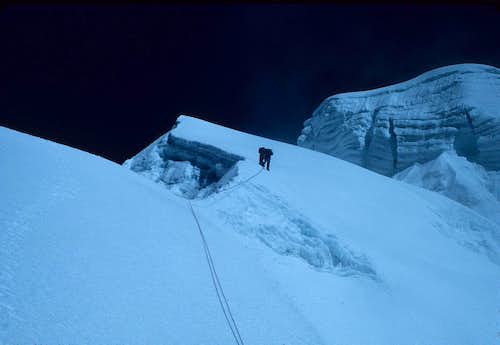 The pitch leading to the high camp on the South West Ridge.

This was one of the most spectacular places that I've ever been to! 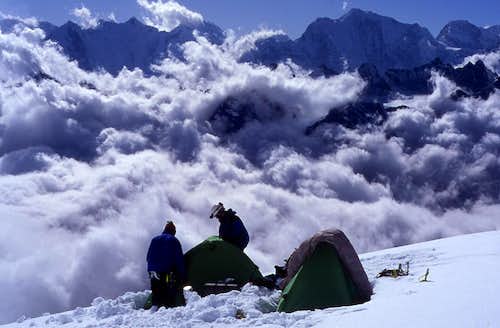 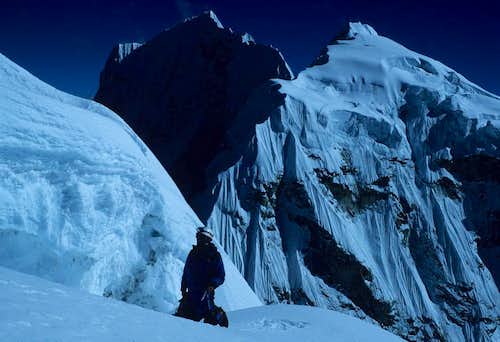 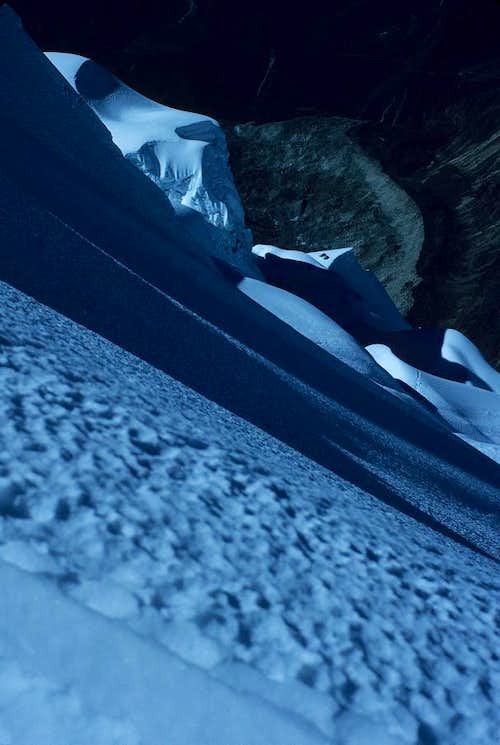 High camp on the South West Ridge from above.

Although the angle eases somewhat at the top, there are a number of ice towers and short steep walls that must be ascended along the way. I really liked how the photo of John shows the annual snow accumulation! 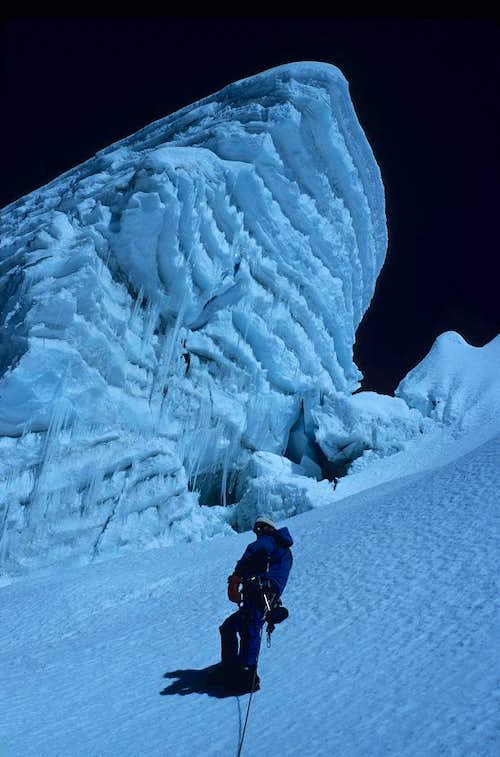 John Climaco not far from the summit. 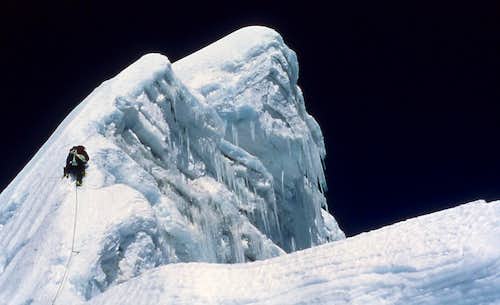 Myself two pitches from the summit, photo by Andrew Brash.

The first photo (by Andrew) shows a small sub summit about a pitch below the true summit. The second is of the actual top and was taken I think, by Chris Breemer. The seven thousand foot north face is immediately behind. 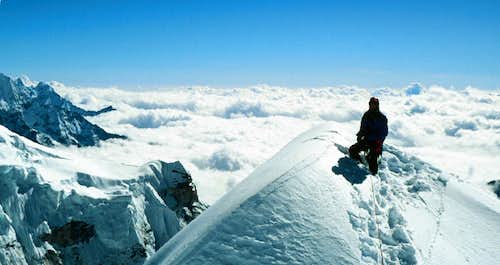 On a small summit a pitch from the top. Photo by Andrew Brash. 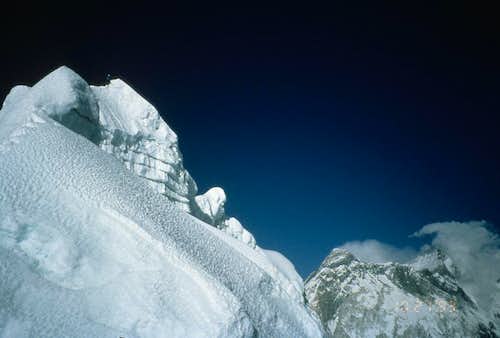 After the climb, I wandered over to the wonderful vantage of Gokyo Ri where I took this photo of Everest as well as the first photo in the collection. 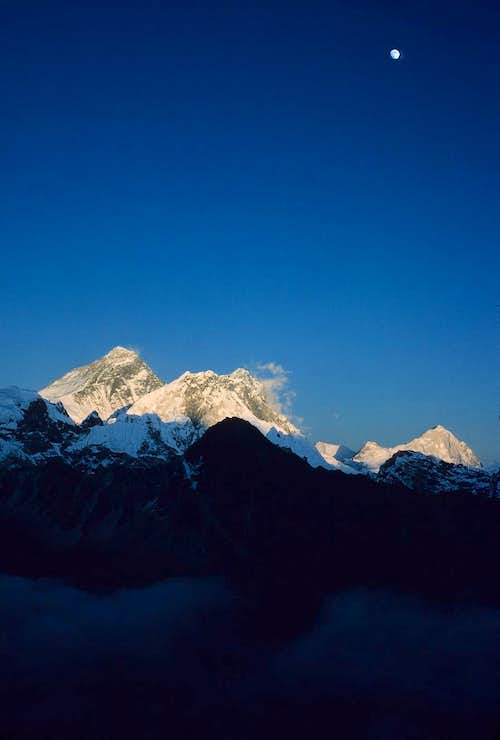 From Gokyo, we went over the Cho La into the Khumbu Valley. Beneath the shadows of Ama Dablam, we had dinner with Barry Bishop (who made that peak's first ascent) and Lute Jerstad who were returning to the Everest Base Camp on the 30th anniversary of their ascent. Then, since I had a week before my plane left back to the United States, I hiked out to the town of Jiri and then took the bus back to Kathmandu. This was one of the most beautiful hikes that I've ever done. 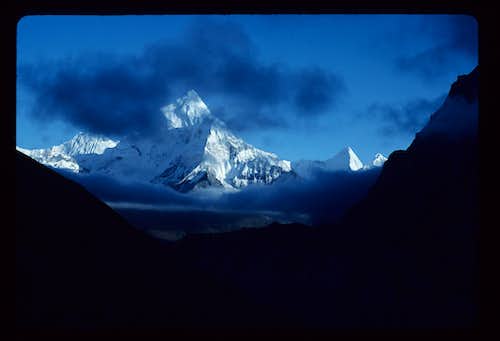 Ama Dablam from near the Cho La. 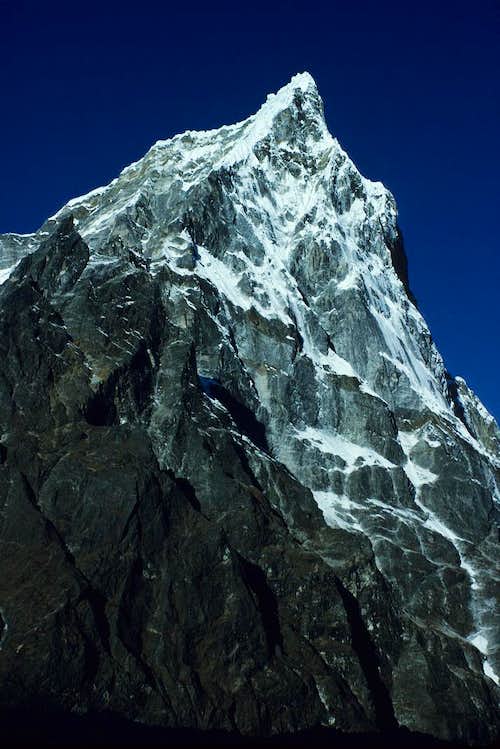 The North East face of Cholatse 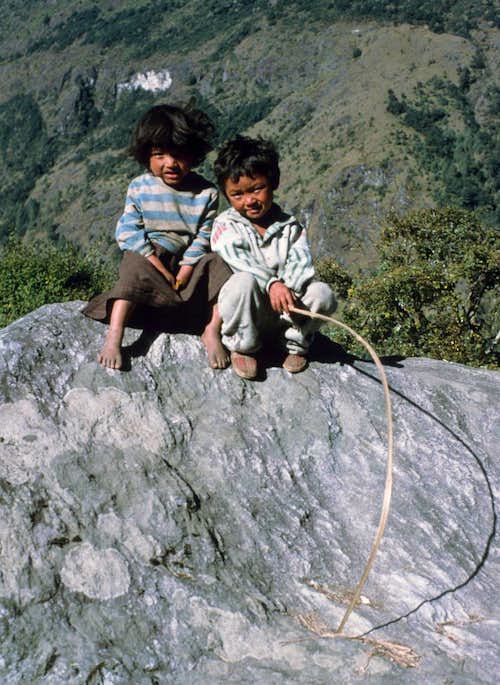 Children near the town of Lukla on the hike out. Cloud forest on the hike

Thanks for the kind comments, Scott. The trip was one of the best of my life!

Very interesting and informative, great to see this kind of stuff here. Thanks for taking the time to put it all together.
D

Thanks for the words of encouragement! I liked your profile picture.

foto-journey to the roof of the world. I notice a few of your
awesome fotos have a "black sky" effect. Is that something you
performed (edited) afterwards in Photolab, OR is it a natural
scene??? It looks cool! Congratulations on your informative page!

Thanks for the kind words regarding my pictures! There are a couple things that couse the black sky effect, first that the sky gets a deeper blue color at high elevation than at sea level, second that the camera lets a certain amount of light in to properly expose the film. When taking a picture of a very bright subject such as snow, the sky gets underexposed as a result making it appear blacker than in real life. In terms of the pictures, they were slides that I then scanned. The only thing that I did to the images after scanning them was to take out marks from dust that was on the image when it was scanned and to reduce the resolution of the picture somewhat so that the file size was more reasonable.

That's all I can think of.

Thanks! I loved your lone posted photo as well. Where was it taken?

Makes me accelarate my plans for Himlung next year ;-)
Thanks, Peter

Thanks. I enjoyed looking at your pictures. You have some great ones!

I hope to one day have the oppurtunity to see things like that; and the skill to capture them so beautifully.

Thank you for your remarks! It's easy to come away with beautiful pictures when you are in a place as wonderful as Nepal, and the people there are as nice as anywhere that I've been. I hope that you get there someday!

I trekked the Everest trail and the views of Cholatse had only one competition, Ama Dablam. However, I know that climbing Cholatse is by far more challenging than Ama Dablam. Great set of photos, and TR,
Happy climbing,
Marc

Thanks for the kind words! It was a wonderful trip in a beautiful place. I'd have to add to you list, though. Thamserku (my spelling might be off) was one of the most spectacular mountains that I've ever seen as well...

What dreams are made of. Excellent Photographs of an amazing rock! I would climb that over Everest any day (given I had the skill and fitness level)!!!!!

Thanks for the comments, it was a wonderful trip! The peak is currently a treking peak so logistically it is not all that difficult to go there...