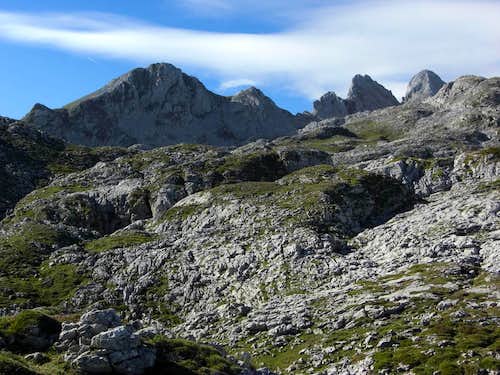 Pico Cuvicente as seen from near El Jito

The eastern end of Macizo El Cornion, the western massif of Picos de Europa, hosts some nice hiking and scrambling summits, far away from being crowded: Pico Cuvicente is one of these outings.

Standing between Jultayu to the east and Peña Blanca to the west, Pico Cuvicente is the easternmost summit of El Cornion massif which surmounts a height of 2000 meters.

Towering 1500 m above Cain and the Cares gorge, facing the 2000 meter rockfaces of Torre Ceredo and its adjacent peaks, Pico Cuvicente offers quite impressive views. Only to the west the views are blocked by the much higher El Cornion summits like La Robliza or Torre de los Cabrones. Nevertheless the looks into El Hoon, the huge sinkhole between La Robliza and La Verdilluenga are equal impressive.

Pico Cuvicente can be summited together with Jultayu in one long day, which is a nice round trip in the Vega de Ario region. The upper parts of the route, starting from Collado El Jitu near Refugio Vega de Ario, are off trail – you will find only some cairns and you have to navigate through heavily carstificated landscape – many sinkholes and small valleys cause some ups and downs when traversing from the Collado El Jito to the north slopes of Pico Cuvicente. The weather should be clear there, fog and clouds will cause detours and errors immediately.

So keep an eye on the weather and the possible Atlantic fogs which can drift in quickly. Due to these fogs we stayed away from the summit one day and turned round at Cabeza la Forma, the nearest summit to Refugio Vega de Ario. One week later, a sunny and perfect day saw us on top of Pico Cuvicente.

There are two main trailheads for Pico Cuvicente:

At Soto de Cangas take AS 262 to Covadonga.

In high season (july and august)and during some high days road number CO-4 is closed for public traffic from about 8 am to 8 pm. During this time you have to take shuttle busses to Lago de Ercina, starting at Cangas de Onis and several other stops between that town and Covadonga. You can use the public ALSA busses or private taxi busses. All information about the close-downs and the busses can be found here. Outside the close-down hours you can drive up by your own car.

During the rest of the year it is allowed to go up to Lago de la Ercina by car. ALSA busses and taxi busses are operating notwithstanding. 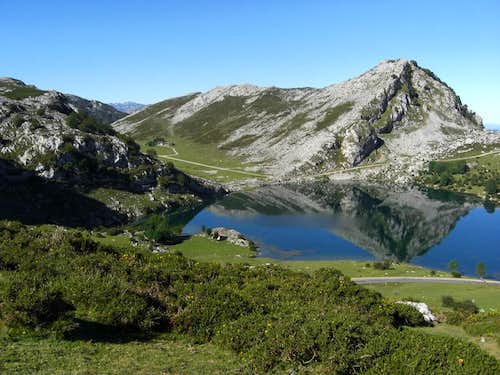 There are two parking areas near Lago de la Ercina:


The ALSA busses end at the Buferrera parking area; the taxi busses go to the Restaurante Maria Rosa!

As a climb of Pico Cuvicente isn´t a very short outing I recommend to drive up by car before the high season daily close-down of the road and wait for the reopening in the evening. As the food at the lakeside restaurants seems to be not bad, the evening waiting time should be not too boring!

You reach Cain, coming from Burgos or Leon region on road number N 625 to Cistierna and Riaño in the direction to Cangas de Onis.

At the Ermita del Ponton road number LE 2703 branches off to the right to Posada de Valdeon. From there take the narrow road to Cordiñanes de Valdeon and to Cain.

Start at the upper parking area and cross the meadow north of Lago de la Ercina to a huge rock above the eastern shore of the lake. At this rock a trail starts (sign for “Refugio Vega de Ario) ascending to Majada La Veguina and to Jou del Beduyal. After a level part the trail arrives at Majada Las Bobias, an enchanting place with a spring with good water southeast of the Majada.

The trail traverses high above Majada La Redondiella, crosses Valle el Cabrital and a small creek and ascends more steeply to more Jous and Vegas until it arrives El Jitu (El Hitu), a col below Cabeza La Forma and some 10 minutes before you arrive Refugio Marques de Villaviciosa aka Refugio Vega de Ario.

Leave the trail at some huge cairns to the left and follow off-trail some more cairns to Horcada (Horcau) Valle, a depression between Cabeza la Forma and the Jultayu / Pico Cuvivente massif.

At that point DON´T follow the obvious line of cairns to your right; this is the route from Refugio Vega de Ario to Vega de Aliseda and Refugio de Vegaredonda! Go more or less straight on, navigating around many small sinkholes and karstic depressions until you arrive the steep meadow slopes of Los Parés, the northern limitation of the Jou de Jultayu.

Climb these slopes up to Los Pares, a nice viewpoint. Take a narrow trail in a scree field to your right and traverse the lower parts of the Cuvicente east slopes to a scree chute. Best cross that chute (you can ascend the chute, too, but this is not recommended) until you reach some talus fields. Climb over that talus up to meadow slopes and – in the upper part of the Cuvicente ascent – mor talus until you reach the upper Cuvicente ridge. Climb an exposed ridge crest (UIAA grade I) up to the summit.

There are two routes from Cain:

These routes are, due to the heavy altitude difference, not very frequented. They are very steep and the trails are narrow.

A trail starts there, ascending steeply the Canal up to Sedos de Oliseda, a rock feature where the narrow path is very steep and some rock scrambling is involved. The route goes straight up to Horcada Arenizas at the eastern border of a huge sinkhole, called El Hoon de Oliseda.
From there walk and scramble up the west ridge of the secondary summit of Pico Cuvicente, called Torre de la Celada (Adrados map) or Morra di Cuvicente (1994 m). Descend into a notch and scramble up the summit west ridge of Cuvicente.

For the Canal de Trea route follow the signs to the Cares gorge from Cain (Ruta de Cares), cross river Cares on Puente Los Pinteros and follow the trail to the water capture at the upper beginning of the Garganta di Cares. Follow the Ruta de Cares to Puente de los Rebecos and Puente Bolin.


After Puente Bolin look out for the sign “Canal de Trea”; a narrow path leaves the Ruta de Cares to the left and climbs up endlessly the Canal de Trea to the Collada (Collau) Las Cruces. Turn left on the trail to Jultayu summit. Where the trail arrives at the lower end of Jou (Hou) de Jultayu (Hultayu) leave the trail to the right and cross the sinkhole on the northern and western slopes up to the col between Jultayu and Pico Cuvicente.
Turn right there and follow some foot tracks and cairns below a rock face over scree and talus to the east slope of Pico Cuvicente. Climb this slope over meadows, scree and talus, following sparse cairns up to the uppermost east ridge of the mountain. A short climb brings you up to the summit (UIAA grade I moves, very exposed to the south).

Both routes can be combined to a long round trip. Jultayu can be climbed easily following the west ridge from the col between Jultayu and Cuvicente. There are sparse cairns, too and some foot tracks. There is easy rock scrambling to do and a nice rock window, which gives some deep views down to Cain and Valdeon.

The national park was set up in may 1995 by enlarging its predecessor, the "Parque Nacional de la Montaña de Covadonga" (National Park of the Covadonga Mountains). This one was founded in 1918 to mark the 12th centenary of the famous Battle of Covadonga in 718 (or 722), the ignition point for the long Spanish Reconquista, which ended in 1492 by conquering Granada.

The National Park actually includes a total of 64,660 ha. In July 2003 the Picos de Europa were made a Biosphere Reserve by UNESCO. 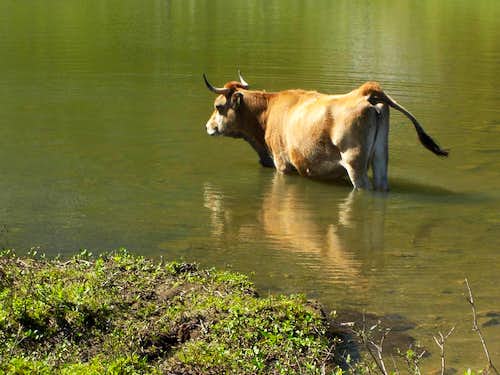 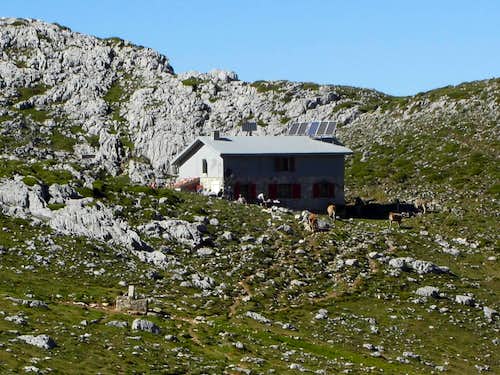 
You find accomodation at: 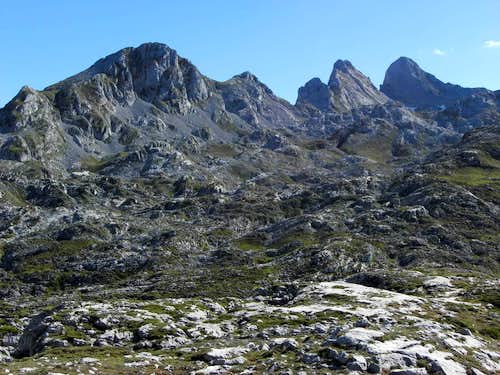 Pico Cuvicente is mainly a spring, summer and autumn hike.

In winter the mountain is surely a snow shoe tour, too.

The Adrados map shows no ski tour routes in this part of Macizo El Cornion. The north route to Pico Cuvicente has – in my opinion – too much ups and downs for a nice downhill ride. The Canal de Trea or Canal de Herrera are very steep and seem to have not enough snow most time of the winter / early spring.

You need normal hiking gear for a summer and autumn tour on Pico Cuvicente. Gaiters and hiking poles may be useful in springtime.

The summit ridges of Cuvicente and the traverse to Jultayu has scrambling and short climbing parts up to UIAA grade I. 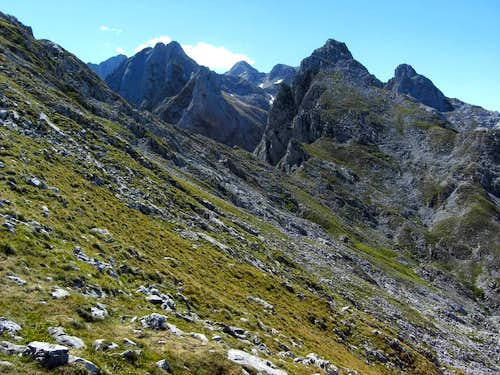 The best hiking map of the region I know.