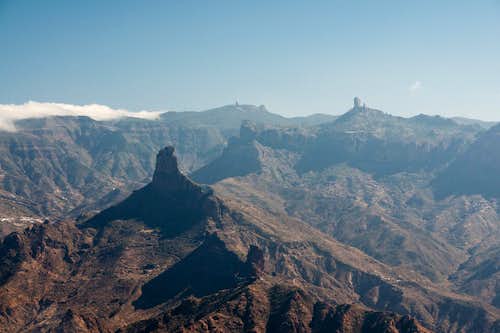 Gran Canaria is the second largst of the Canary Islands. Like all its neighbours it was created by volcanic activity. In contrast to neighbouring Tenerife however, the volcanos are not active anymore. The most recent outbreak dates back 2000 - 3000 years. The island is circular, beautifully documenting its volcanic history. It rises about 4000m out of the seaboard with its highest peak, Pico de las Nieves (=Snow Peak), 1951m high.

The summit is part of both the rims of Caldera de Tejeda to the west and the Caldera de Tirajana to the south. It forms the boundary between these two huge erosion craters (up to 20km in diameter!) which are the result of large landslides as well as the more regular activity of wind and rain. Due to its central location, however, Pico de las Nieves is home to a milityry base (radar and radio installations, restricted access, watchdogs) as well as a lot of TV- and radio masts on neighbouring Roque Redondo. Another side effect of the military base is that the summit can be reached by car and there are lots of visitors at almost any time of the day.

Though the summit itself is off limits there is an interesting alternative: in the Pico de las Nieves south face, which drops some 800m into Caldera de Tirajana, there is a spur, a knife-edge rige, which runs out far into the caldera, culminating in a broad tower. This ridge can be reached from the mirador at the end of the highway, which leads to the mountain. After a few steps you are on the top of a little side summit. More adventurous visitors can hike out the ridge, scrambling up and down some minor (2m) walls until they reach the base of the broad tower. On the way they walk above a large rock window on the separating ridge.

As one of the major european vacation getaways Gran Canaria can be reached from all major European airports. There are almost no regular flights but lots of charter flights. The airport of Gran Canaria is in the western part of the island. From the airport take freeway GC 1 northward to the exit Telde, turn westward onto GC 10 and then in Telde take GC 130 in the direction of Pico de las Nieves. Near the top a side road turns left towards the summit and here you have to follow the signs to Pozo de las Nieves. The parking lot is at the end of this road. As for the two tours described as routesayou get to the trailheads as follows: Vega de San Mateo:

You won't be able to reach the real summit of Pico de las Nieves because of the military installations on top. Otherwise there are no limits, no permits, no restrictions. 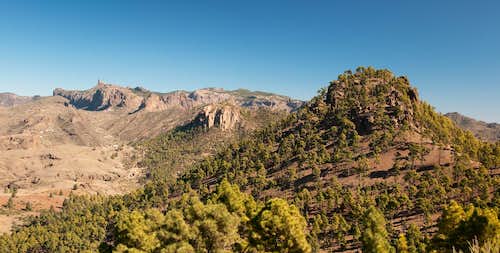 This is an all year destination. Contrary to its name (=Snow Peak) there is hardly ever snow on Gran Canaria. You should take care of the trade wind clouds however, wich often cover the summit. And why go up there without being able to see?

Gran Canaria has a lot of options for accommodation. Most visitors book hotel rooms from their travel offices or over the internet. However, you will most certainly end up in the ugly tourist centres along the south coast. Therefore a much better solution is to rent a holiday home, most often a rural finca. This can also be done by travel office or internet. Camping is a bit of an issue on all the Canary Island. There are designated camping zones but getting a place often involves some bureaucracy. The closest campground is al Llanos de la Pez between the trailheads at Pico de las Nieves and La Goleta. Wild camping is not permitted anywhere on the island.

The following table gives a rough general overview over the weather on Gran Canaria, at sea level.

The Canary Islands (as well as Madeira) are located in the trade wind zone. You almost always encounter northeastern winds which carry a lot of humid air. Being forced to climb to higher altitudes this moisture condenses into clouds. This in return means that most of the time the northeastern part of the islands is covered in clouds from altitudes of 1000m through 1500m.

The mountainous region in the centre of the island is of the same alltitude and higher and thus stops the clouds. While the northern parts of the islands can be foggy and rainy the southern parts most often are sunny and hot. On Gran Canaria the north-eastern part of the island collects almost all moisture. However, unlike on the other Canary Islands no cloud forest remains. The laurisilva fell victim to the agricultural development of the island.