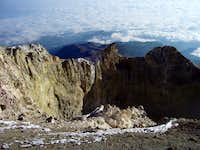 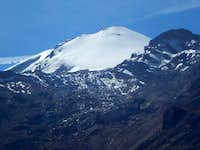 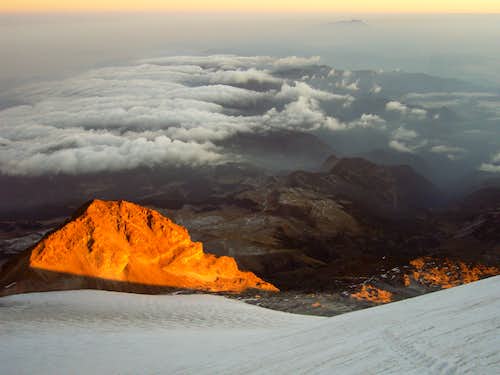 After packing up the wagon, we set out from the hotel at noon for the two hour trip to the base camp at 14,000 feet by way of a very rough and winding road passing through even smaller villages tucked in the hills that surround Orizaba. Once we finally approached camp, we sorted our gear and made our way into the public shelter that would be our home for the coming days. The hut conditions were better than we were used to being it was dry, clean, and not too cold even with the harsh wind coming from the north. After sorting out gear, we took about an hour break to settle in and decided to hike up 45 minutes up the route as climbers were still coming down for the previous night summit attempt. There was a team of eight climbers that were still not off the mountain with three failing to make the summit and one with altitude sickness and spitting blood. This is a big mountain and but to be taken lightly so I knew the right approached is to pace ourselves and take the edge off so we can make the summit the morning.

Once back at the shelter, we prepared dinner including a coffee and tequila for dessert. I went outside the hut to write my journal via voice recorder and prepared mentally for the 1 am ascent under a brilliant sea of stars. This ascent is a monumental climb which is the first of ProjectEarth360 that will set the tone for the rest of my life. As I sit here and think of the coming year being it is New Years Eve, I am reminded of an expression that I have learned to appreciate and trying to instill in my life which is “life in every breath” which is life in every cup of tea, life in every meal, life in every conversation. The coming year for me is to get deeper in my daily life including more discipline for my body and spirit with a very lean lifestyle. Tonight is beautiful and this is the first adventure of ProjectEarth360. Not sure how far I will get in this phenomenal project but it's a perfect goal for the rest of my life and nothing as far as I know can match it. Life is grand as I realize what my life is about with this new chapter starting off by sitting on a rock at 14,000 feet in another country preparing to climb a challenging peak. The wind is amazing and I look forward to getting deeper and deeper and deeper. What a way to come into 2009!

I woke up at 11:55 a.m. Mexican time which is 9:55 p.m. in Seattle and watched the New Year come in from Mexico. A major goal of this trip was to be on the summit of Orizaba on January 1, 2009 which has slowly become a tradition over last year as we also spent the first day of the year in the mountains (not to this extreme). This is becoming a great habit that I enjoy and a much better way to celebrate the New Year over a hangover from a late-night party (even though we still had tequila).