On the way to the Pic de Travessani from Colomers
Pico de Travessani is perhaps better known under the name "Agulles de Travessani" (Travessani Pinnacles), and this is justified: this top is not really a top, it is just a proud promontory made of jagged needles that overlook the basin of the lakes South from the Montardo (the view from which the Travessani Pinnacles are the most famous).
Speaking heights, Pico de Travessani is just at the same level than the ridge to which it connects, and even surpassed by the nearby and much more anonymous Cap deth Port.
But, those needles needed to be introduced, because they are also a world-famous rockclimbing spot, with excellent granite and vertical walls. Their routes require an excellent level, then I am not competent to introduce them here, but anyone who does is welcome to attach them to this page.
If you want to have an idea, check this Picasa album for example !

Many "how to" chapters of this peaks are similar to the Colomers page, but I thought it was worth presenting this other very charismatic peak of the same surrounding.

Note: Estany de Travessani is also the name of a lake located under the pinnacles, near Port de Caldès. The Travessani pinnacles from the Besiberri
From France and the city of Toulouse, take the A64 motorway and exit at Montréjeau, take the direction of Saint Béat, Vielha, and the village of Tredos. From there, a track leads to Bahn de Tredós where is located a car park. The rest of the track is closed during the high season and 4x4 taxis ensure the rest of the way till the end of the track, on the foot of the trail heading to the Colomers hut.

From Spain and the city of Lérida, take the 230 road to Benabarre, Pont de Suert, and Vall de Boí. Don't miss the splendid churches with high towers that make the pride of the valley.

Both starting points can be reached via the other country by taking the tunnel of Vielha.

Looking to the Montardo
It is possible to reach the top of Pico de Travessani just by hiking, or, even better, snowshoes or skitouring.
The "normal route", from the Circo de Colomers, is a secondary valley neighbouring the Circo, with a gentle regular slope all the way long, until the ridge. All the way up, the peak we see is Cap Deth Port, the north close neighbour of Travessani, the last one not visible until the last moment. 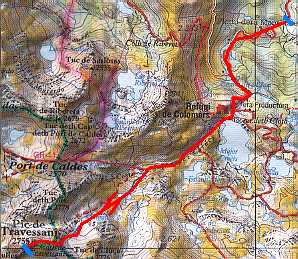 When snowy, this route is making a perfect ski or snowshoes trip.

However, once at the ridge, we must leave skis and other gear for some easy scramble until the end of the "promontory" of Travessani, where we overlook the lakes of the Montardo. The pinnacles of Travessani appear suddenly behind an unsignificant dome on the ridge.
The views to the Punta Alta and Besiberris are also breath-taking. Agujas de Travessani
The south of the peak (but only the south) is located into the area of the
Aigüestortes National Park, with all regulations involved (no flowers picking, etc etc)

Some old maps mention a campsite at Bahn de Tredós. Beware, this campsite doesn't exist since more than a decade ago !
The closest official campsites are in Artiès (North) or Barruera, Vall de Boí (South).

The only convenient mountain hut seems to be the Refugi Colomers, at the low end of the Circo de Colomers :
http://www.refugicolomers.com/

It depends on the side of the mountain. As mentionned, the south slope lies in the National park, then the rules are probably more strict (if not forbidden ?). However, I think it is rarely controled. If you plan to, choose a remote and not very visible corner, set the tent or bags at dusk and leave in the early morning. Don't leave any trace or rubbish.
No fire (for the fire risk, but the also the risk to be caught).
And do not wildcamp during the day...