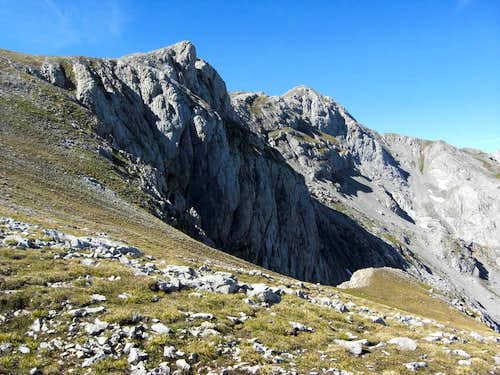 Despite of their low prominence in the Macizo de Andara main ridge between Pica del Jierro to the west and La Rasa de la Inagotable to the east, the Pico del Grajal de Abajo (2246 m) and its western and higher brother Pico del Grajal de Arriba (2349 m) receive quite a lot of visits and are popular among the Spanish hikers. The both Grajales, as they are named too, are lined up at one of the Andara main routes, the one which goes from Collado del Mojon to the Morra di Lechugales summit. This explains the frequent visits of these two peaks. With respect to the popularity – I can only guess ….

The lower brother– as its name already tells us – Pico del Grajal de Abajo stands west of Collado del Mojon with a prominence of about 40 m to the western and eastern cols within the main Andara ridge. To the north there is the 300 to 400 meters deeper Valle del Andara and the route from Caseton de Andara to the Collado Valdominguero, which uses the north slopes of our summit, is called “Traviesas del Grajal de Abajo”.

To the south the huge Canal de las Arredondas ends below the lower Grajal summit. Despite of having “only” a height of 2246 m the Grajal de Abajo offers good views to the east (eastern parts of Andara massif, western Cantabrian mountains), the south (Liebana region) and the west (main Andara summits and parts of the Valdominguero group and the Macizo Los Urielles).

The higher brother, de Arriba, offers even better views, due to its higher position within the Andara main ridge. Nevertheless, this “summit” is just a culmination point in this main ridge without any noteworthy prominence to the west. From the col west of Pico del Grajal de Abajo you have to ascend about 140 m to reach a heap of rocks which form the Grajal de Arriba “summit”.

South of Pico del Grajal de Arriba is the impressive Hoyo del Evangelista, a high and huge sinkhole where the highest ore mine of the Andara massif is located. The southern border of that Hoyo is the huge summit of Silla del Caballo Cimero, which dominates the southern scenery of Grajal de Arriba.

To the west the ridge continues first near level, then steeply ascending, to the Pica del Jierro summit cairn.

Both summits are easy hiking summits, ski touring and snow shoe hikes are possible, too. Their traverse in combination with some other summits within Macizo de Andara is a great outing and great fun. 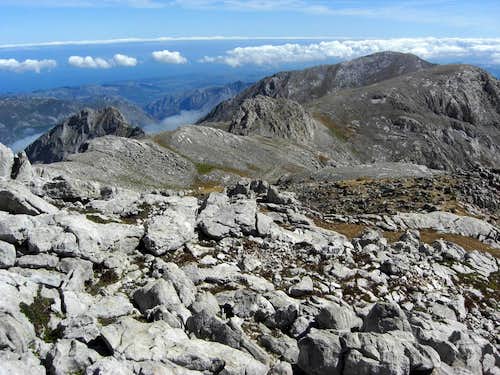 
You reach Sotres or Jito Escarandi on road number AS-264 from Arenas de Cabrales (look up the Macizo de Andara SP page how to get to Arenas de Cabrales) to Poncebos. Turn there on road number CA-1. Follow CA-1 until you reach Sotres, leave the village on that road to the east and park your car at or near the first switchback after the village limits.

For Lon or Brez follow road number CA-185 from Potes in the direction of Espinama / Fuente De. 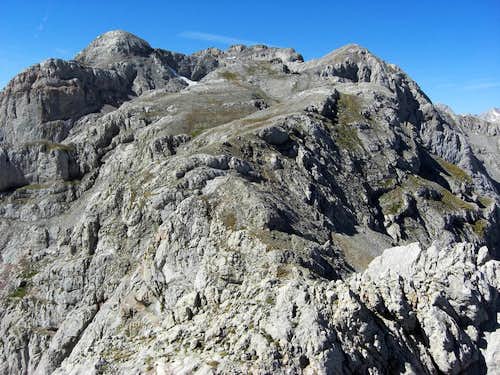 This is the ski route / snow shoe route, too!

Trailhead: villages of Lon or Brez

Both routes meet at Collado del Mojon. From there ascend the east slopes of Pico del Grajal de Abajo to the summit – some cairns, rests of a trail, talus and scree – an easy route. From the summit turn southwest and descend to a house ruin some meters below the summit. Follow the narrow trail below the ruin down to the col between Pico del Grajal de Abajo and de Arriba. There you regain the rests of the old mine route or trail to the Minas in the Hoyo Evangelista.

This road starts at Collado del Mojon and uses the south slopes of Pico del Grajal de Abajo, first descending a bit and then ascending back to the ridge crest and the above mentioned col. Follow this road/trail in western direction. First the ridge is steep, narrow and rocky. After a while you enter a gentle meadow slope. Follow the mine road until its enters the Hoyo del Evangelista. Leave the road there and ascend the meadow slope on a narrow and marked trail to the summit of Pico del Grajal de Arriba.

The ski route / snow shoe route is nearly the same, depending on the snow conditions.

The Grajales are part of the Parque National de los Picos de Europa.
The entrance to the national park is free, you need no permits. 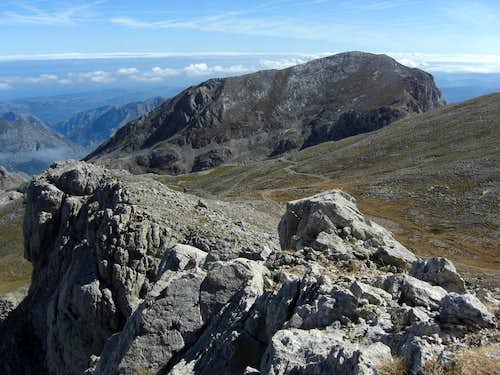 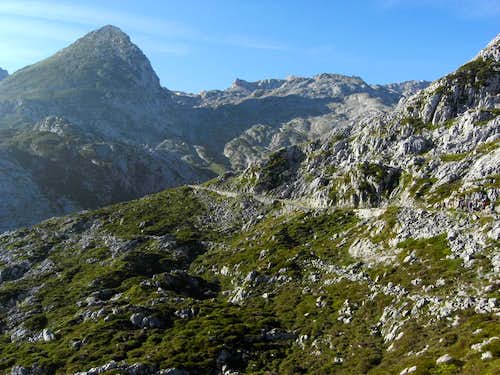 The ascent to the Andara hut with Pico Macondiu

As the Collado del Mojon and the Canal de las Arredondas is one of the main ski routes within Macizo de Andara, the Pico del Grajal de Abajo and de Arriba, too, are a ski tour summit aim.

You need normal hiking gear for a summer and autumn tour on Picos de Grajales. Gaiters and hiking poles may be useful in springtime. 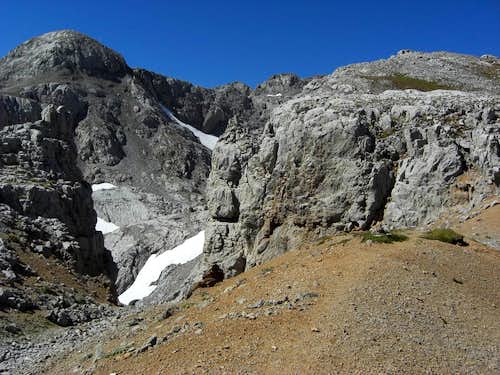