Pico del Tajo de los Machos does not have the distinction of being one of the Sierra Nevada’s highest peaks. At 3088m it is the 20th highest peak. It does stand out as a notable summit (at least in the page author’s opinion) as it a peak that takes commitment to reach. It is separated from the higher peaks by a long and at times difficult ridge, far from either of the shuttle bus routes that can take groups up high. The peak can be reached from the village of Capileira, but not easily and with an ascent of just under 1600m. Routes from other villages in the Alpajurras have an even greater ascent. 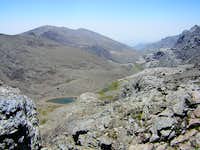 This is peak is also satisfying to reach. The area is greener than the central Sierra, and rugged cliffs can be seen on the opposing ridgelines. From here there are excellent views of distant Veleta, Mulhacén and Alcazaba to the north. The summit is also a stones throw away from Cerrillo Redondo, meaning Round Hillock, which sits slightly lower at 3058m. The name 'Pico de los Machos', directly translates as 'Peak of the clif of the male'. It can also be translated as 'Peak of the cliff of the Braves'. This is a name steeped in local history, for Machos could also refer to mules or castrated bulls. Colloquially, it can also infer meaning towards a man’s privates.

As mentioned, the peak is remoter than its higher siblings. It is best reached once you are already high. From the Veleta refuge a traverse of Tajos del Nevero and then another walk along a ridge will bring you to the summit in half a day. 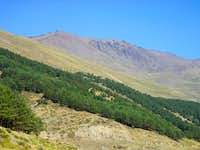 From Capiliera, the summit can be reached by following the aqueducts to the head of the side valley to the east of Pico del Tajo de los Machos and Pico de las Hogas. By cutting across country up to the pass between these two peaks will put you on an easy ridge that leads up to the summit. Winter buses run from Granada to the ski resort (named Sierra Nevada as the destination) several times a day, from which there is an easy route to the Veleta Refuge. These will be crowded so be sure to book a ticket in advance. Off season, there is a 9am bus (2 coaches) that runs to a point above the ski resort at 2300m on the ridge that leads up to Veleta (3396m). The bus ride takes just over an hour. This bus returns at 5pm. You can check this timetable and book tickets here. Buses run from Granada to Capileira several times a day. Joris provides good directions here

Camping is not officially allowed in the Sierra Nevada without authorisation. Finding who to contact is difficult.

If you decide to camp, the ideal place is above the small lake in the valley between Pico del Cartujo and the ridge leading to Pico del Tajo de los Machos. The north western slopes of the summit also have many suitable places for camping. Along the north ridge from the peak, however, is a refuge at the beginning of Tajos del Nevero. Its in a bad state but there a few of the rooms remain usable and sheltered from the wind. By crossing the Tajos del Nevero, or following the route below, the far better Veleta hut can be reached.