The island of Madeira is located in the Atlantic ocean about 450 km northwest of the Canary Islands. It has been created by volcanic eruptions but in contrast to the Canarias erosion has formed the island by creating bizarre rock formations as well as deep gorges. Madeira is "the vertical island" because wherever you go somewhere's a vertical drop of several hundred just beside you. This is particularly evident when you hike the tunnel route between Madeira's number three and number one summits, Pico do Arieiro and Pico Ruivo.

The latter, though the highpoint of the island, is somewhat of an anticlimax to the wonderfully impressive central mountain range. Shaped like a dome it can be easily reached from its closest trailhead by a hike of less than two hours. On the summit three lookout platforms have been built, which are connected by boardwalks and fenced in by railings. You have wonderful views in all directions but the construction takes much of the fun out of them. Right beneath the summit, on a balcony beneath its north face you can find Casa do Abrigo, a mountain hut with rudimentary service.

Yet, anyone climbing the mountain from Boca da Encumeada or Pico do Arieiro will come away absolutely impressed. Ledges and tunnels through vertical sections, long and steep staircases, paved caminos and last but not least Madeira's extensive vegetation make any of the routes quite an experience. The hike along the weather divide from Boca da Encumeada (11km one way) is a very scenic panorama route with views to both the northern and southern coasts. The two branch ledge route from Pico do Arieiro through closed, vertical terrain offer new impressive scenes every few steps. Rightly it is considered the must-do hike of the island.

Pico Ruivo is a hiking summit. There are three routes from the three trailheads, which converge at Casa do Abrigo. The most picturesque route from Pico do Arieiro has two branches, an eastern and a western leg. Both have a history of being closed due to rockfall. However, at least one of the branches will be kept open. 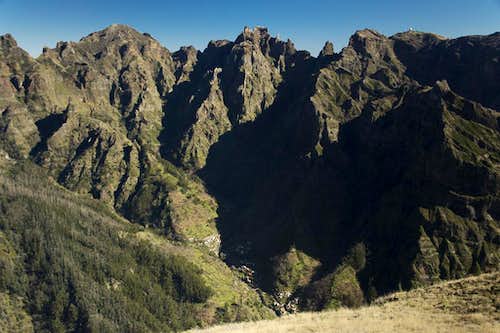 Madeira can be reached from any of the major European airports. There are almost no regular flights (with the exception of some portugese airports) but quite a lot of charter flights.

Pico Ruivo is located in the east of Madeira's weather divide, with the shortest ascent from Achada do Teixeira. The most popular and impressive route starts at Pico do Arieiro while the longest one starts at Boca da Encumeada.

There is no red tape. Parking lots are free of charge. However, take extreme care with fire. There has been a series of forest fires in the last years that destroyed much of Madeira's wonderful vegetation, especially on the south side of the weather divide.

Anytime! Madeira doesn't know any seasons so these hikes are always possible. Since Boca da Encumeada is (situated on) the weather divide it might become foggy. The other trails, however, are pretty safe!

You can find a lot of hotel rooms and apartments on Madeira. Either visit the next travel office or do an internet search. The island is small, all trailheads can be reached by car in an hour from almost anywhere on the island. Most accommodation can be found in the south of the island near Funchal and Camara de Lobos.

Weather conditions cannot be predicted accurately. Madeira is located in the trade wind zone. You almost always encounter northeastern winds that carry a lot of humid air. Being forced to climb to higher altitudes this moisture condenses into clouds. This in return means that most of the time the northern part of the island is covered in clouds from altitudes of 1000m through 2000m.

The mountains themselves - being of the same altitude -finally stop the clouds so that on their southeastern slopes the clouds "run out". Look at the pictures - it looks like the clouds creeping over the weather divide. Boca da Encumeada - being some 500m lower than the surrounding summits - is a gateway for the clouds from north to south. Thus it very often is covered in mist. Unfortunately, all of the major peaks of Madeira lie around the weather divide, sometimes within, sometimes just out of the clouds.