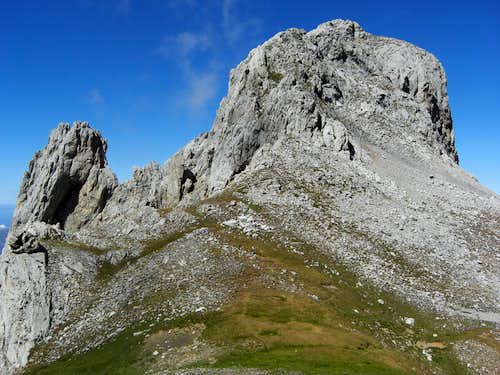 Pico Valdominguero is a wellknown summit in the eastern massif of Picos de Europa, the Macizo de Andara.

It the highest and southernmost summit of a long ridge which starts at Jito Escarandi and climbs over about 1,5 km length from 1300 m to 2264 m. This ridge has a rather broad and gentle appearance, mostly alpine meadows and scree fields with some “Jous”, like the Jou Sin Tierre, until you reach the northern secondary summit of Valdominguero (point 2214 m on the Adrados map). From there on the ridge gets sharp and narrow and requires some climbing up to UIAA grade II in good and firm rock until you can lay hand on the summit buzon.

The east slopes and rock faces of Valdominguero are towering 300 m above Valle Andara and Jou Lleroso (Hou Llerosu). The west face of the mountain is a steep and impressive slope with a sheer hight of 1200 m to 1300 m above Rio Duje.

The trails to this summit are all narrow, hard to find in dense fog or bad weather and with off-trail parts here and there. The routes and trails are mostly cairned, though sparsely in many parts, the main route via north ridge has some red and green dots for orientation in its lower part up to Pico Boru. Nevertheless the north ridge route and the southern ascent from Collada Valdominguero to the summit is one of the main hiking routes of the Andara range. Moreover the north ridge route is a 3 hours hike one way and guarantees a shorter outing than most of the other Andara summits. For that Pico Valdominguero receives quite a lot visits. 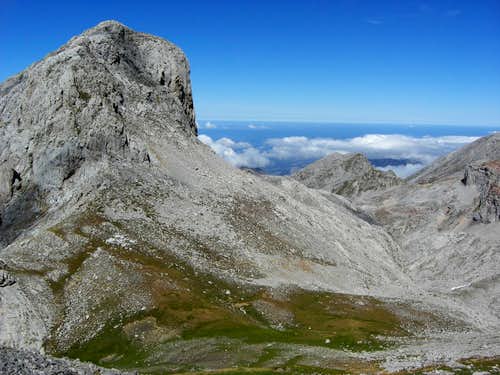 There are four main routes for Pico Valdominguero. 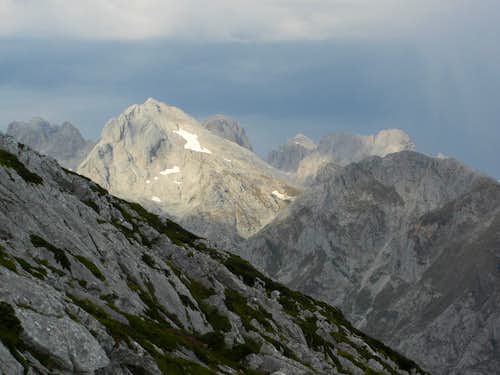 From Jito Escarandi take the old mine road in the direction of Caseton de Andara.
Pass by the ruins of Majada de la Jacuza on your left. When the mine road reaches a level part, called Callejones de Brañaseca on the Adrados map, probably a filled up old Jou or little Vega, some minutes after Majada de la Jacuza, leave the mine road to your right, cross the level meadow of the Jou and join a trail which starts above the Jou and heads to your left up to a col (point 1549 m on the Adrados map, south of Pica de Huente Soles,in the north ridge from Jito Escarandi to Pico Boru). 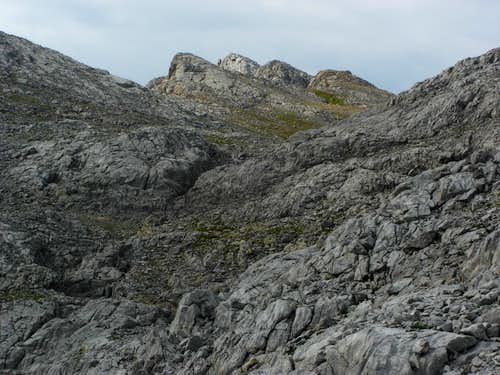 The Jou Sin Tierre with the northern secondary summit of Valdominguero
At that col there is a rock with blue and green marks and arrows for Sotres and Pico Boru.

Follow the Pico Boru direction on a narrow trail which ascends the north slopes of Pico Boru with some good views on the village of Sotres and the Macizo Los Urielles. This part of the route is marked with some red and green dots, too. The route circles round the north slopes on the western side of Pico Boru which is in fact a not very prominent meadow height within the long north ridge of Pico Valdominguero. Stay on the cairned route – the trail disappears now – west of Pico Boru or follow another line of cairns up to this summit and rejoin the route southwest of this “Pico”.

South of the col is the eponymous Jou Sin Tierre, in fact a karst hole without soil – all barren ground. The cairned trail traverses this Jou and ascends on its south side to a talus field below Pico Soriano, where the trail and the cairns disappear. Traverse the talus to your right but keep on ascending until you reach an alpine meadow. Follow this meadow slope straight up to the ridge crest and the northern secondary summit of Pico Valdominguero, 2214 m.

Stay at the now narrow and rocky ridge until you reach a rock face dropping down to the south into a sharp notch. Climb down the steep rock face (UIAA grade II, crux of the route) into the notch. The climb is exposed, the rock is firm with good grips and holds. 2013 there was a sling as a belay at the top of that rock face.

Traverse the notch, tackle a steep slab (one short UIAA grade II move) on the other side of the notch and stay on the right side of the next ridge tower, navigate around it and regain the ridge crest. Stay now on the ridge crest until you reach another secondary summit and descend on easy rock to a huge block, sitting oblique on the ridge. Use the likewise oblique, small ledge running up from right to left, navigate around the edge of the block and immediately downclimb the other side of the block into another small notch.


After that notch best keep right and ascend the now easier rock chutes and small chimneys to your right (UIAA grade I) and then to your left back to the ridge and continue shortly to the summit cairn. 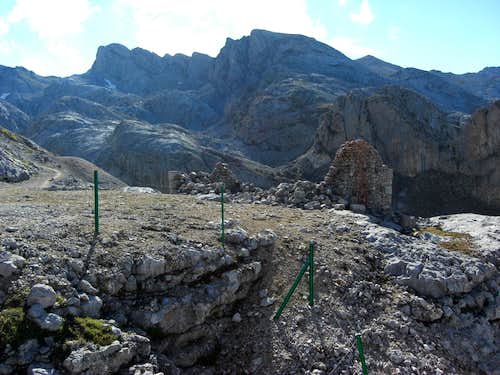 From Jito Escarandi take the old mine road to Caseton de Andara.

You can pass by Caseton de Andara on a good trail west of the Caseton leaving the mine road to the right some 300 m in front of the mountain hut. Alternatively stay on the mine road, pass by the old lorry car (a sort of monument for the mining activities in the Andara region) and arrive at the hut. Follow the mine road further on to the trail junction with the above mentioned “pass-by-trail”.

Ascend on the mine road until you reach a road junction. Stay on the right hand road, which leads into Valle Andara, follow this road some 100 m to another road junction at a col, called Horcada de la Aldea. Take there the left hand road which ascends steeply to the roped up rests of the Mazarasa mine. Look there for the cairns and for some red dots leading you on a very old and deteriorated mine road below the Pico del Grajal de Abacho. This part is called “Las Traviesas del Grajal de Abajo”. The mine road crosses some scree fans and ends within these Traviesas. Follow now the trail up to a col where “Las Traviesas del Grajal de Arriba” start, the traverse of the Grajal de Arriba slopes. The cairned and marked trail circles high above and around Hou Llerosu, the upper part of Valle Andara, crossing a huge talus field until it reaches the meadows of Collau Valdominguero and the col itself.

Leave the trail, which goes on in the direction of Pica l´ Jierro north ridge, to your right and ascend the Pico Valdominguero south face.
Traverse the scree field below the south face from left to right and follow some foot tracks to a series of ledges to your left. Make this traverse until you arrive some steep chimneys and chutes which lead you up to the upper south ridge (UIAA grade I – II).

Some other routes within the south face should be possible, too.

Follow the easy rocks of the south ridge to the summit cairn. 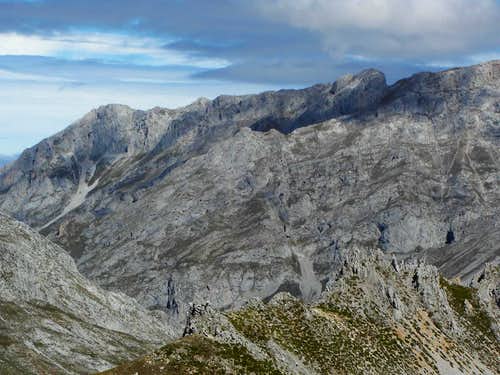 For that route start at Sotres and descend on road number CA-1 to the switchback below Sotres village. Alternatively park your car alongside the dirt road which branches off the CA-1 road at that switchback into the Duje valley.

Follow the road into the valley, passing by Invernales del Texu on your right until you reach the steep Canalon de Jidiello valley, about a bit more than 2 km after the CA-1 switchback. There is a green mark on a huge rock left of the road where the Canalon starts.

Leave the road there and start ascending the Canalon. There is a narrow trail first up to the ruins of Majada de Jidiello, cairned, partly marked with green dots and even leading further up the Canalon. Then the trail gets even more narrow and you have to find your way up until you reach the small and steep rock chute below the meadows of Collau Valdominguero. There is a short rock scramble up the chute.

From the Collau follow the upper Valle de Andara route to the summit.

I was told that there is a direct route from Caseton de Andara to the Jou Sin Tierre and to the north ridge route of Valdominguero but I did not explore that possible ascent. My guess is that you have to go to Collado de la Aldea, use the old mine road straight on to the ex Lago de Andara, now dried out due to the mining activities, and ascend to Collada del Medio between the minor summits of Cuetu de la Ramazosa and Cuetu de la Cueva. Then you enter the valley northeast of Pico Soriano and follow up that valley to a chute, leading up to Jou Sin Tierre.

Anybody there to affirm or correct these dates?

The Macizo de Andara is part of the Parque National de los Picos de Europa. The National Park actually includes a total of 64,660 ha. In July 2003 the Picos de Europa were made a Biosphere Reserve by UNESCO. 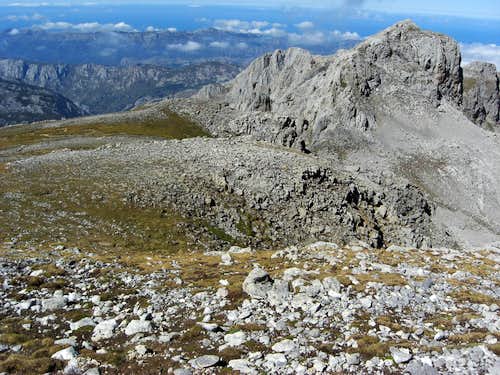 Pico Valdominguero is mainly a spring, summer and autumn outing.

As the slopes of the north ridge are not too steep ski touring and snow shoeing should be possible at least up to the northern secondary summit of Valdominguero during winter and early spring.

You need normal hiking gear for a summer and autumn tour on Valdominguero. Bring a 30 m rope and harness with some carabiners and draws if you feel the necessity of some belay, especially on the north ridge route. A helmet may be useful, too.

Gaiters and hiking poles may be useful in springtime. The traverse from the northern secondary summit to the main summit and the ascent from Collau Valdominguero to the summit is rather exposed and requires scrambling and climbing up to UIAA grade II (parts). 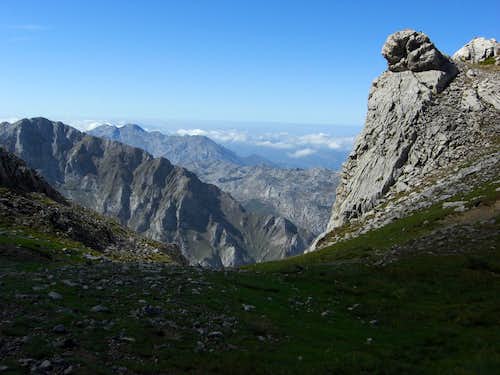