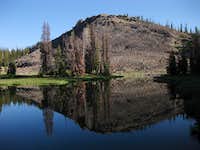 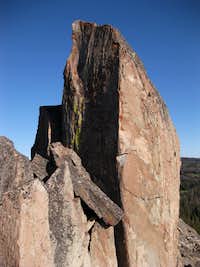 It seems that no Western state is complete without at least one Pilot Knob (a slight exaggeration, as neither Oregon nor Utah has one). SP already has pages for ones in California, Colorado, and Montana.

So here is Wyoming's entry. Actually, Wyoming has three Pilot Knobs. This is the one in the Absarokas. There is also one in the Winds and one near Kearny, which is close to but not in the Bighorns.

Pilot Knob is not much of a peak. The approach is short, and the climb is shorter. It is only about half a mile to the summit, and the elevation gain is about 500'. It took me longer to write this page than it did to climb the peak. So why bother?

* It's on the Continental Divide.
* Getting atop the summit block requires Class 3 or Class 4 climbing.
* There are great views of the Southern Absarokas, including Two Ocean Mountain, Breccia Peak, Mount Sublette, and the Pinnacle Buttes.
* It's something quick if, for whatever reason, that's what you need.
* It's still a ranked peak if lists matter to you.

By most accounts, the southern end of the Absaroka Range is at Togwotee Pass and the northern end of the Wind River Range is at Union Pass. If so, this "strands" a group of peaks-- Two Ocean Mountain, Pilot Knob, Lava Mountain, and Fish Lake Mountain-- between ranges. Where do they belong?

In Guide to the Wyoming Mountains and Wilderness Areas by Orrin and Lorraine Bonney, these mountains are in the chapter for the Wind River Range. However, they are much more like Absaroka peaks, especially the closer to Togwotee Pass the peak is (disclosure-- I know nothing about Fish Lake Mountain). The summit ridge of Two Ocean Mountain, only about a mile south of the pass, consists of the breccia that characterizes so much of the Absarokas. Tiny Pilot Knob, the next peak south, does not consist of breccia but does have dark, exposed volcanic rock and the jagged ridge features common in the southern Absarokas. Massive Lava Mountain has huge amounts of exposed lava, making it resemble the volcanic Absarokas much more than it does the Winds (volcanism did play a part in the history of the Winds, but the range is not nearly so characterized by it as the Absarokas are).

Thus, those peaks are grouped with the Absarokas here on SummitPost.

Getting to the Peak

Not far west of the turnoff for Brooks Lake on U.S. 26/287 (this is 20-25 miles from Dubois), turn west onto FR 537, an unimproved road that when dry should be passable for most vehicles. In 2011, there was no sign, and I am assuming the road construction that went on out here for several years obliterated it, but it is easy to see. Another thing to look for is a bridged stream crossing that occurs almost immediately and is clearly visible from the highway.

In 2.7 mi, FR 537 is gated at the Continental Divide and the boundary line of Shoshone and Teton National Forests. It is possible to park here and then follow the Divide north to Pilot Knob, but there is a better and shorter approach.

Instead, park 2.2 mi from the highway where there is a small meadow framing a view of Pilot Knob. There is also a minor stream coming in from the north here. See the picture below for the location. 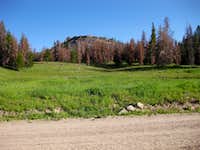 Hike through the meadow to the trees beyond, basically paralleling the course of the stream. Soon, you reach a pond that reflects Pilot Knob. Hike around the pond and up talus to gain the eastern ridge and then hike and scramble to a series of jagged-looking outcrops that are the highest points of the peak. The most striking of them is not the highpoint and is definitely a Class 5 block (about 15'). The highest outcrop is a short distance beyond it. On its south side, the side you reach first, it is a short Class 4 scramble up to the top. However, when descending, I found a Class 3 option on the north side.

It's grizzly country, so carry pepper spray and be knowledgeable about proper etiquette.

Dispersed camping is widely available. Not far east on 26/287 is the Falls CG, operated by the Forest Service. There are two campgrounds by stunningly beautiful Brooks Lake (about 10 road miles from Pilot Knob), but they are small and popular and often fill by early afternoon.