Pilot Peak is located in the Boise Mountains of southwest Idaho. 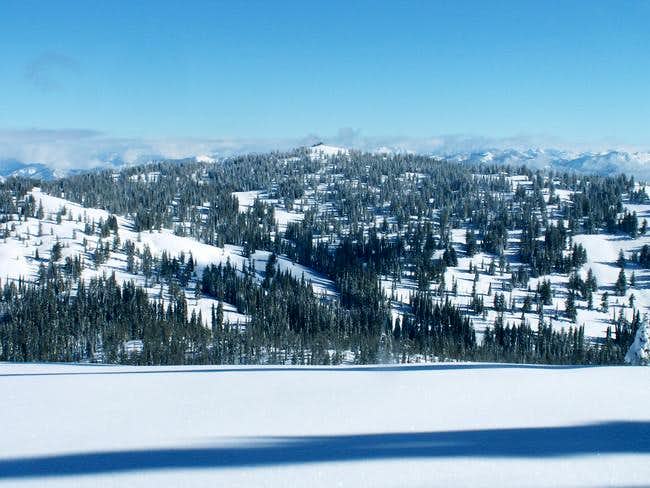 Pilot Peak, located in the northwestern corner of the expansive Boise Range, would be a rather insignificant peak if it were not for its popularity among outdoor enthusiasts. Pilot Peak's gentle and tree covered slopes offer scenic terrain but little incentive for the hardcore mountaineers to visit the area. although there is nothing in the way of technical climbing, Pilot peak is an enjoyable hike for anyone just wanting to get out and stretch their legs and get a good view.

Pilot Peak is the one of the higher points in this section of the Boise Mountains and is located just two miles north of More Creek Summit. For this reason, there is naturally a former lookout site on the summit which has now been converted to a radio communications area. There is an access road which is open during summer. During the winter this road makes an excellent day trip on snowshoes or skis. the eastern slopes of the mountain are in the Whoop-em Up park 'n ski area which is a popular destination for many Boise residents during the winter months. Its easy year-round access and relative proximity to Boise make for a crowded mountain at times. but with a little careful planning to avoid high use times you may be able to have the mountain all to yourself.

During summer, many come to the area for a good mountain bike ride to the summit or a just a drive to the summit for the views of the distant Sawtooth Range. In winter, snowmobiles and backcountry skiers alike flock to the slopes of Pilot Peak in hope for the freshest tracks in the deep snows that pummel the area in winter.

From Idaho City, it is a winding 13 mile drive to Mores Creek Summit. The road to the summit can be found on the south side of the large parking area on the west side of Idaho 21.

As a snow shoer or back country skier be aware of the numerous snow machines during winter. during the summer the mountain is also popular among runners, mountain bikers, and ATV used. being willing to share is essential on this mountain.

Idaho 21 is open year-round to Mores Creek Summit and beyond in all but the worst storms. It is closed however past Lowman for a good portion of the winter due to avalanche danger. Pilot Peak from the East

Because the eastern slopes are part of a Park 'n Ski area there is a $7.50 fee to use the area during the winter. This is good for three days. A season pass costs $25.00. this money is used exclusively to groom trails, provide parking, and supply other facilities such as toilets. For more information about pricing visit this site.

Pilot Peak came be climbed year-round but is probably more well known as a winter recreation mountain. as mentioned before it is popular with snowmobilers as well as skiers and snow shoers. It is also a pleasant hike during the summer months.

It is recommended if attempting during winter to go on a weekday if snowshoeing or skiing because of the snow machine traffic.

Camping is allowed on the mountain with numerous places to choose from. Keep in mind though, that there are no established sites on the mountain. Even though this is a fairly high use are please try to make as little impact as you can. Your best bet for camping would probably be at one of the nearby campgrounds operated by the Boise National Forest. the nearest ones are Ten Mile, Bad Bear, and Edna Campgrounds. here is a link to these and many more campgrounds in the Idaho City Ranger District.

Although the communications site does not report weather, the Mores Creek SNOTEL Site is located directly at the base of the mountain and provides good general snow information.

These are other sites which may be helpful.