Overview Part I-- The Pinnacle Buttes

If the mountain gods had wanted, they could have made Wyoming’s Pinnacle Buttes a climber’s paradise. Many of the ingredients are there-- gorgeous setting, alpine conditions, terrifying exposure, dramatic spires and big walls. Yes, they indeed could have made this unique and spectacular massif a climber’s heaven.

But they didn’t, for they also reached down and turned the rock into rotten junk. Beautiful, yes, but treacherous and deadly, like a woman out of film noir or hard-boiled pulp fiction. Like a Siren. Like a rattlesnake. Like forbidden fruit. You get the picture.

Such a shame, sort of. Almost without doubt, there are clean, solid sections with stiff grades that would thrill technical climbers, but the overall quality of the rock is probably the principal reason that the climbing crowd has largely bypassed the Pinnacle Buttes. Other reasons: the off-trail bushwhacking approaches; the fact that the area is, as a friend once put it, “Bear Central” (and this is Wyoming, so the reference is to grizzlies); and the proximity of the Wind River Range and the Teton Range, both of which are visible from atop the Pinnacle Buttes. 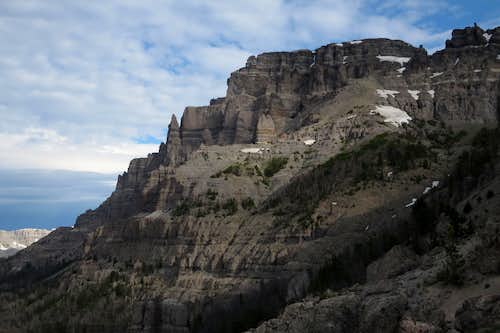 Pinnacle Buttes-- Main Summit
Instead, this formation that awes the viewer no matter where he or she views it has dwelt in photographic fame and climbing obscurity. Many of the pinnacles have never, to common knowledge, been climbed, and the many summits, both major and minor, are the realm of bighorn sheep, marmots, eagles, a few wilderness-seeking scramblers, and lightning.

Pick your own simile or metaphor for describing the Pinnacle Buttes. Whatever it is, it will probably connote darkness and/or evil, and it will seem apt. I like to think of the massif as resembling something out of Tolkien’s Mordor, or as the jagged battlements of an enormous castle inhabited by the cruelest and deadliest fiends. Notice the similarities between the two.

Although the entire massif contains dozens of pinnacles, spires, and prominent outcrops, there are five distinct summits (going by prominence standards). Thomas Turiano’s Select Peaks of Greater Yellowstone covers a route up the highest, and centrally located, of them, and there is also an SP page for that peak. But the formation also has a northwestern summit, northeastern summit, and two southeastern ones, all of which have the prominence to count as separate peaks. I have climbed them all, and each has its own character, challenges, and rewards. (Some maps and sites list only four summits and give different names, but I contend that my take is the more accurate one based on both maps and experience.)

Bonus-- the four satellite summits probably see no more than a few ascents per year each. One of the southeastern ones probably sees none at all most years, and it is possible, even probable, that to date it has seen only one ascent.
Each peak has its own SP page, linked below and attached to this page as a child as well. The purpose of this page is not to give detailed information on each peak but rather to group the related summits in the spirit of being user-friendly. 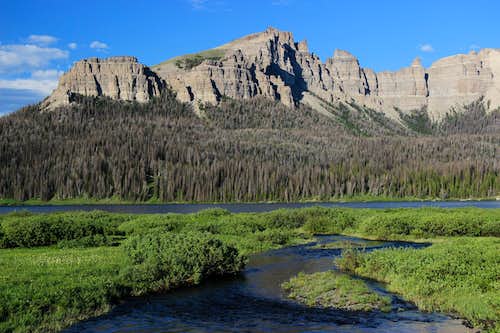 Summer is the prime season for climbing these peaks, but the Togwotee Pass area is popular for winter sports, and there are people who use their feet or snowmobiles to access the couloirs on the formation, which they then climb and ski.

The Brooks Lake and Pinnacles campgrounds are both located about a mile past the turnoff for the trailhead. Summer 2007 fees were $10/night. Both are small campgrounds that operate on a first-come, first-served basis, and Brooks Lake is very popular with fishers, so don’t show up after 3 P.M. on a nice summer day and expect to find an open site. The campgrounds have trash bins, bearproof lockers for food storage, pit toilets, and water (though the water at Brooks Lake was shut off in July 2007). Both campgrounds were closed for renovation and due to road construction in 2014, but hopefully they will be open in 2015.

Both campgrounds are among the most scenic developed campgrounds you will ever see. Brooks Lake is surrounded by open meadows and towering cliffs and pinnacles.