It is long 900m and high 450m. Mostly composed by red gneiss rocks, typical of Monterosa. Funny rock passages of II/III with a plaque of IV-. Most of the cliff can be bypassed on the south side. On the south side isn't very impressive and often covered of snow. On the NE side, it looks very notched above the precipice of the "ghiacciaio delle Piode".
It has been climbed for the first time by the climbers: Giuseppe Farinetti, Giovanni e Giuseppe Gugliermina in the 13/09/1872. The name "Cresta del Soldato" (the soldier's ridge) was given by William Martin Conway who explored the ridge accompanied by an Italian soldier with the task of controlling the border. 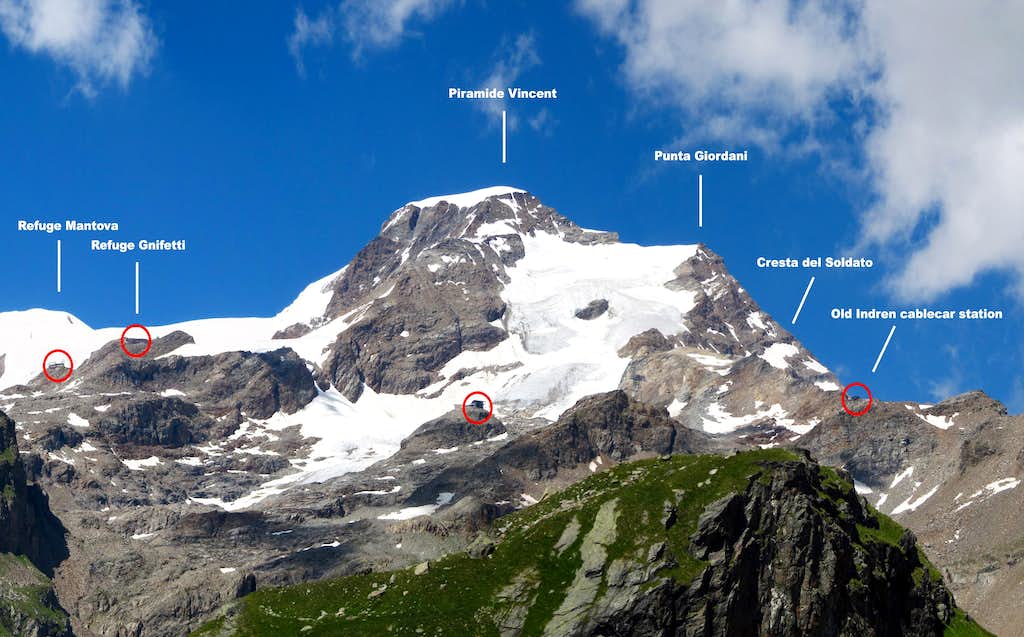 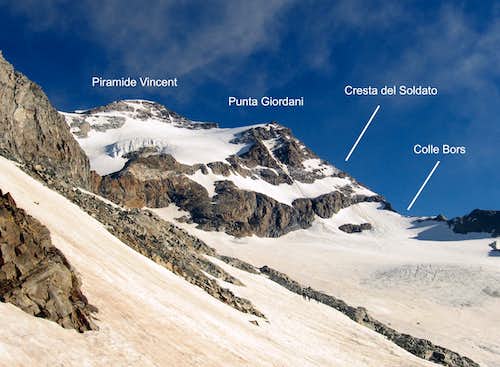 Cresta del Soldato
The route can be done in the same day, or in 2 days heaving a rest in the refuge Mantova (also good for aclimatisation). The ascent can be tested starting from there, which is placed at (3.470m) on a rocky prominence between Lys Glacier and Indren glacier.  In this case it leads to the base with a crossing between the glaciers of Indren and Bors, from a harness to the arrival of the highest ski lift. The route could not verify from the ground, so reference to informations that can provide by the keeper of ref. Città di Mantova (telephone: 0163.78150).
Approach the ridge: 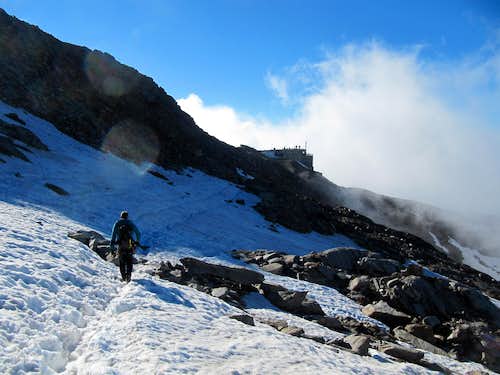 The old Indren cable car station
from Alagna Valsesia, can be reached by cable car (telephone: 0163.922922) top station of new Indren (the first race of a round part to 7.30, the last return to 16.15, but times may vary and therefore it is better to call). Also from Gressoney/Staffal, cable car to Passo dei Salati to Indren.
In any cases, it must be reached the old cable car station of Punta Indren. A path behind the abandoned building leads to the "ghiacciaio di Bors". Cross the glacier pointing the saddle between the Punta Vittoria and Punta Giordani (colle di Bors). The saddle can be overcame in two different points. 200 meters over the Mantova hut, the refuge "Gnifetti" is also a good basecamp for the Monterosa group routes, but in this case only suitable for the return. Infact it's placed too high, and it doesn't permit to approach the ridge from the base. 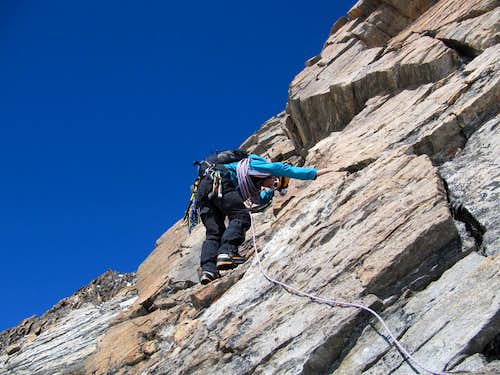 Cresta del Soldato
From the arrival of the new cablecar (3.275m), reach in few minutes the glacier of Indren and briefly climb towards the north-east gaining a few tens of meters in altitude, then turns to the southeast and, first floor then a slight descent, you reach the old station of the cable car Indren (3.260m, 15 minutes).
It overlooks the access ramp to the Glacier Bors (N). From here it is visible throughout the ascent route, and if you are lucky with the weather, you can enjoy the view of the Cresta del Soldato gilded by the first rays of the sun.
Go down the ramp and begin to reassemble the Glacier Bors keeping to the left (crushed stone) and pointing in the direction of the rock band that closes N supporting the upper portion of the glacier Indren. Then move decisively to the right, along a distance (falling stones and ice) above the band and thus earning the small saddle at the foot of the ridge (3.650m, 1h'00/1h'30 hour).
Climb up the ridge now, immediately crossing a steep snowfield between large blocks and rubble, sometimes crossing small shoulders on the edge, sometimes moving more towards the left, rough terrain (attention, chamois can cause falling rocks from above!). 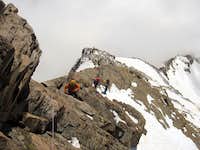 Around half of the ridge you will encounter some beautiful passages on solid rock of a reddish color, which are overcome by logic (II+). Just below the top (always visible, consisting of large blocks) meets the most demanding part of the ascent, a big plaque of solid rock that falls on the Glacier delle Piode. It can be climbed directly crossed on the ridge (IV-  2 anchor) or wanders easily to the left, then to the right going up to a small shoulder on the edge. 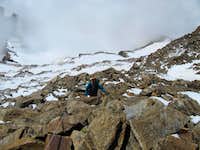 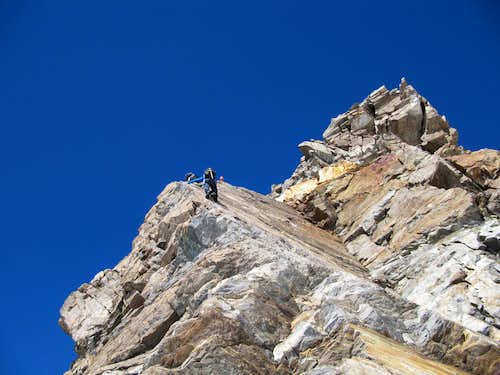 The hardest passage of the route (rated IV-)
A further, short passage is now over directly (II+), exiting on the last stretch of debris that leads to the small block of the summit. Head back on the edge or a bit on the left, thus earning the top (4.046m small statue of the Virgin; 3-4 hours from the base).
You may possibly continue for the Pyramid Vincent (PD+ 1h'00/1h'30 hours), or go down to the glacier Indren, following the route of the normal (F+, crevasses) to the new cable car station. 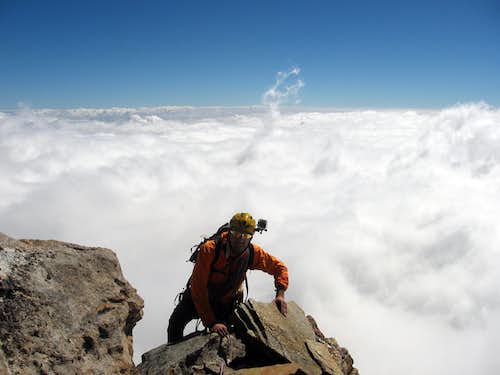 A well known SP member in action
The descent is along the normal route. Going down to the north-west when you reach the track that goes up to the normal route to Signalkuppe of Monte Rosa. Along this, turning south, you arrive at refuge Gnifetti. FRom Punta Giordani descent the glacier of Indren directly to the cablecar statio.
Warning: this area is well known as very foggy in the afternoon. Take care about the foot track you are following in the fog!
Video of the route