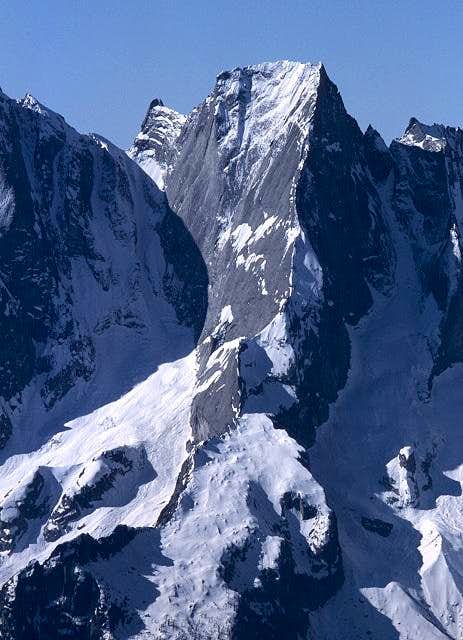 From the north. Photo by Mathias Zehring 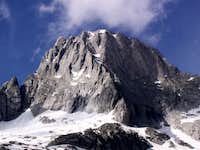 Pizzo Badile is a fantastic granite peak that stands out notably from its surroundings in the Bergell (Bregaglia). The north side of the mountain is in Switzerland and the south side is in Italy. The relief is much greater (about 3,000 feet) on the north than on the south (about 1,500 feet). Views of the north side of the peak are striking from any angle. The long North Ridge has been described as one of the best rock climbs of its grade in the Alps (UIAA III & IV with places of IV+). The Northeast Face is a famous and much sought after climb with a rich history. Routes on the south side of the peak are not as long, but are of high quality and in a spectacular alpine environment. Because of its relatively modest elevation and the "pure rock" nature of its routes, many people underestimate the potential for, and the effects of severe weather on Badile. Many fatalities have resulted. One should read the account of the first ascent of the Northeast Face to be reminded. There are MANY routes on Pizzo Badile with the easiest being the normal way on the South Face graded WS with places of III. This was the route taken on the first ascent of the peak by W.A.B. Coolidge with Francois and Henri Devouassoud on July 26, 1867.

Climbs from the south are normally accessed from the Luigi Gianetti Hut which is reached by about 4 hours of good trail from the resort at Bagni del Masino. Climbs on the north are accessed from either the Sciora Hut or Sasc Furä Hut both of which are reached from Promontogno / Bondo. The Sciora Hut is about a 3-hour hike and the Sasc Furä Hut about 4 hours. If one has a car, it is possible to drive part of the way shortening the walk to both huts. TOPO MAP LINK: .

Nearly all the routes on Badile are rock climbs with difficulties in excess of UIAA IV. Only the Normal Route on the south, which is rated II+ or "with places of III" depending on the source, the East Ridge that is rated III and the West Ridge, also a III, are easier than IV. Ice in the range of 50 to 60 degrees can be encountered in the Cengalo or Badile Couloirs if they are used to approach the East or West Ridges respectively. In the book BERNINA / BERGELL die 100 Schönsten Touren (The 100 finest routes in the Bernina - Bergell) by Giuseppe Miotti & Alessandro Gogna with Gaston Rebuffat, seven of the 100 routes are on Pizzo Badile alone. (This book is unfortunately out of print in German, but is apparently still available in its Italian edition: Dal Pizzo Badile al Bernina, Zanichelli, ISBN 8808-06216-3) 1) South Face: WS, places of III 2) North Ridge (Nordkante): S- with places of IV+ 3) SE Face via Molteni: S+ with places of V and V+ 4) NE Face via Cassin: SS with places of VI 5) NW Face (Pfeiler des Wassertrophens): SS+ with places of VI & A1 6) ENE Face Bruder Route: SS+ with places of V+ & A1 / A2 7) E Face English Route: AS- with places of VI & A1 / A2 Now days many climbers chose to finish the famous Cassin Route on the NE face via a chimney that ends on the North Ridge well below the summit and descend from there "fore going" the summit and the upper part of the route. Descent from Badile is normally done via the South Face Route or by rappelling the North Ridge.

The technical difficulties do not end upon reaching the summit of Badile. Now one must descend. The easiest, most preferred, and most recommended descent route is the South Ridge. This is great if the climb started in Italy, however if one climbed a north side route and has a need to return to the Swiss side of the mountain, it will almost certainly require an overnight stay in the Gianetti Hut and then take most of a day to return to Switzerland.

The route down the South Ridge itself is not necessarily easy to find if one did not ascend that way. Difficulties have been reported (see below for my personal report). The return to the huts on the Swiss side is normally made via either the Passo di Bondo (3169 m) which requires glacier travel on the Swiss side and brings one first to the Scioria Hut or via the Passo Della Trubinasca (2703 m) which brings one to the Sasc Furä Hut. There is a loose and often icy couloir on the north side of this pass frequently requiring an ice ax and crampons.

If there is not a need to return to one of the Swiss huts, one can hike out to Bagni de Masino and obtain public transportation from there. It is recommended that schedules be checked in advance. The bus schedule has not been ideal in the past. It is apparently possible to arrange for a taxi by calling from the Gianetti Hut. It is entirely possible to descend the North Ridge (Nordkante) and many parties do so. But this is a quite long and demanding descent requiring many rappels. Parties do run out of daylight and have to bivouac.

Descending the Nordkante is not a decision to be made lightly. A couple of personal experiences: alpenkalb (Rolf) reports ( in 1958): Many people chose the way to the Italian Capanna Badile (2534 m); stay there over night and return to Switzerland the next day via Passo di Bondo. This, however, may not be the best choice, because there are too many cairns on the way down, which is very misleading.

I remember a French climber who was very upset about that, looking for the way and cried Merde! We talked to each other, it was Lionel Terray, and we headed safely to the very expensive hut. It might be a good idea to descend the Nordkante instead. Fred & Moni's experience (1985): We failed to find the easy way down the South Ridge and instead ended up on a rappel route down what seemed to be the steepest part of the southwest face. This worked out fine, but was not what we had planned on. We did not have any trouble finding the Gianetti Hut (formerly Capanna Badile referred to by Rolf) as it was clearly visible from our descent - we just traveled to it straight cross-country. This would not be so simple in the fog or darkness.

The hut warden was great and fed us a tasty minestrone even though we arrived more at bedtime than dinnertime. We did not find the hut to be expensive. We planned to return to Switzerland via public transportation since our English language guidebook stated that there was regular bus service. It turned out that it was "regular" but only twice a day - once early in the morning and once late in the evening. The late bus was too late to make train connections to Switzerland! Fortunately, we were staying with friends in Sils Maria and they "rescued" us with their car.