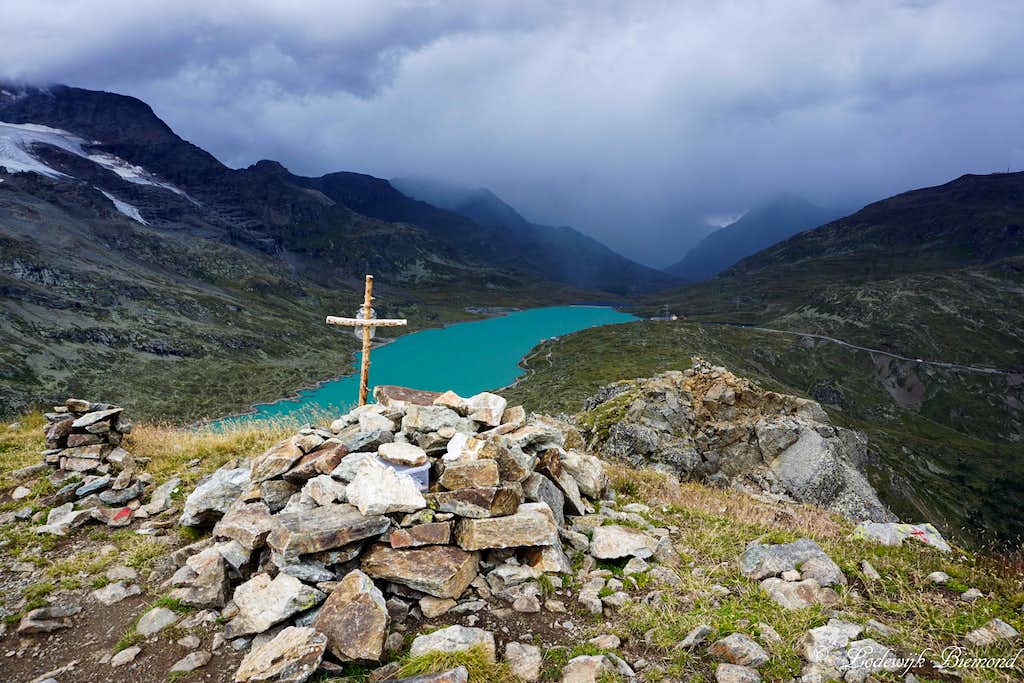 Piz Campasc is located at the border of the Bernina Group with the Livigno Alps. Directly to the west of Piz Campasc is the Lake/Lago Bianco (2234m) with the main ridge of the Bernina mountains behind. Piz Cambrena and Piz Palu (just the tip) can be seen from the summit of Piz Campasc when looking towards the west. Towards the north and east the passroad towards Poschiavo and Italy goes down the Campasc valley (Val da Campasc) with the Livigno Alps dominating the view above the valley. Val Poschiavo is located to the south of the mountain.

The NW side of Piz Campasc has a gentle slope towards the summit, this is also where the trail from the Bernina pass goes up the mountain. The other faces are steeper and form a quite impressive sight when looked upon from the passroad down to Poschiavo. 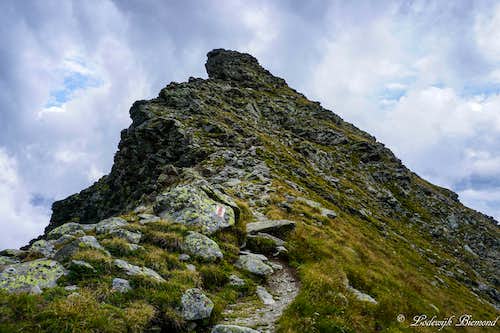 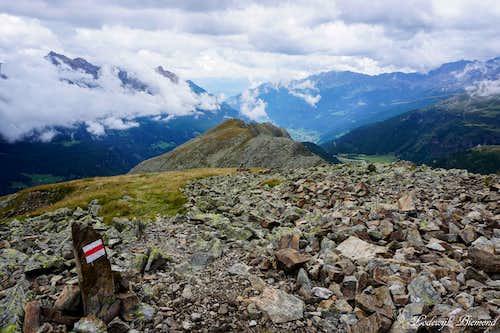 Val Poschiavo from Piz Campasc
The route starts at the Ospizio Bernina (2303m), which is just west of the actual Bernina Pass at 2329 meters. The Ospizio can be recognized by the big parking lot and the big building stating “Ospizio”. Also see the red marker on the map for the exact location. At the big parking lot is a yellow signpost. Walk towards it and you can read “Pizzo Campasc”, “1 hour”. I must say, one hour is rather optimistic. It is possible if you are a fast hiker, but I would say the ascent takes about an hour and a half. Follow the very well visible trail in the direction of Pizzo Campasc (towards the S-SE). In the first half hour or so you will ascend and descend some foothills until Pizzo Campasc eventually comes into sight. Until you reach the base of the mountain the trail is easy and relatively flat (T2). At the base of Pizzo Campasc the trail starts gaining in elevation and goes up the W-NW flank of Campasc. The trail passes south of the summit (underneath)  and finally arrives on the summit of Piz Campasc from the SE. This last part is graded T3. The path is visible at all times and marked by red-white stripes. Descent is the same way back to the Bernina Pass. A round trip takes about 2 to 3 hours.
The starting point (Ospizio Bernina at 2307m) is shown by a red marker on the map. The summit is also marked. The trail is indicated by the red line. 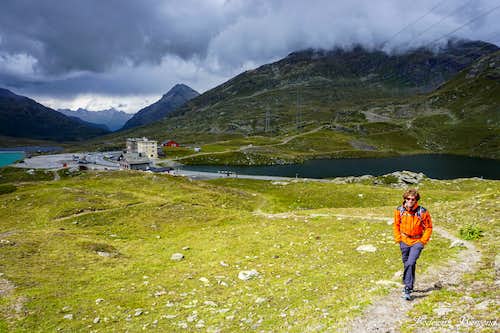 Ospizio Bernina  & start of the trail
The route starts at the Ospizio Bernina (2303m), which is just west of the actual Bernina pass at 2329 meters. The Ospizio can be recognized by the big parking lot and the big building stating “Ospizio”.  The Bernina pass is located along highway 29 and connects  the Engadin (St Moritz, Pontresina etc) with Val Poschiavo and Italy (Poschiavo , Tirano etc). South of the Bernina pass there is also a connection with Livigno via the Forcella di Livigno.

See the link for a route planner to get to the Bernina Pass (Google Maps). 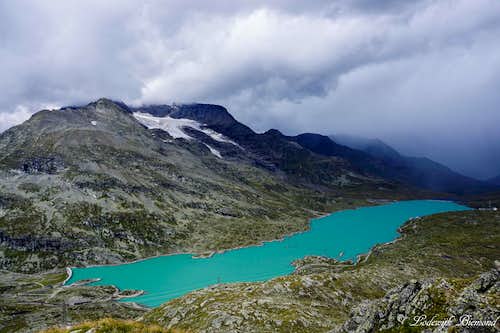 Lago Bianco & Bernina Group
Piz Campasc can be climbed best during the summer months when there is no snow on the mountain. 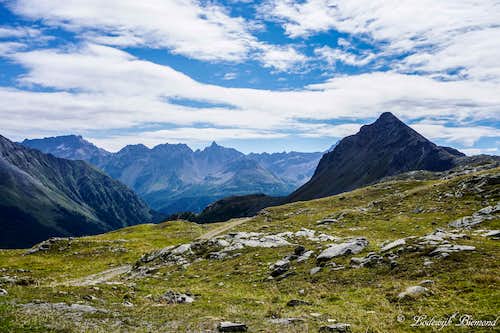