"Piz Muragl 3157m", despite located totally in swiss territory, it is part of the "Livigno alps" but closer to the Engadin valley. Precisely above the village of "Pontresina", next to famous holidays location of "Saint Moritz". 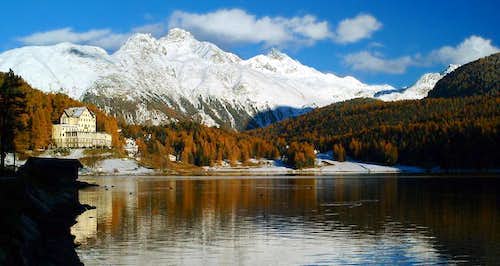 Piz Muragl from the lake of Saint Moritz

It isn’t imposing as the neighbour "Piz Languard 3262m" and, togheter with the near "Piz Vadret 3199m", surrounds with a circular rocky ridge the valleys “Muragl” and “Campagna”, parallel from each other.

Very nice is the small lake placed at the foot of the north side of the mountain, called “Lej Muragl” 2715m, visible only in summertime.

The best way to reach the mountain, is take the cable railway that start from the village of Pontresina and takes to the “Muottas Muragl” mountaintop station (2,453m). Restaurant, Hotel and few cablecars are placed here. 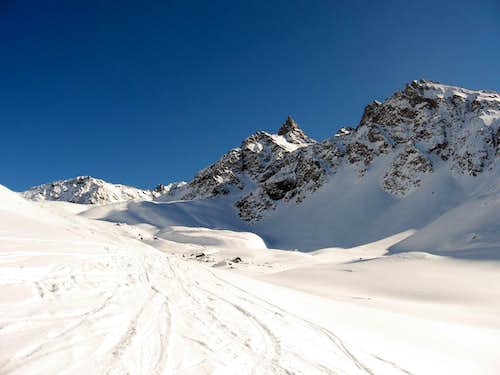 Piz Muragl, as the neighbor mountains hasn’t important climb routes, but this region is considered a paradise for skimoutaineering. Ski routes are really a lot!

Another important reason to climb Piz Muragl is the massive view to the Bernina group.

Located in the corner between the “Engadin” and “Val Bernina”, the solutions to reach this place are many.

In any case, the starting point is the cable railway down station, placed in location “Punt Muragl” 1738m, few hundred meters over the roundabout of Pontresina.

For who want to hike from the base of the valley, the path start from the down station as well.

Other ways, are possible only hiking from “Alp Languard” 2330m or from “Val Prüna” across the “Fuorcla Muragl 2891m”; long and unusual approach.

For trained skiers, the route could start from the down station car park (1419m drop).

From the station, take the paved road that takes to the villas in the wood. Keep the right (your) side of the sledding pist and point to the center of the valley (Val Muragl). Not distance the pist, and keep going easily until the up station will be visible over a cliff. From there, the valley decrease in steep.

Beautiful slopes lead to the base of the mountain. Once reached the foot of the mountain, go up on steep slopes across the remains of a small glacier with a right turn.

For who want to start from the up station, follow the snowy path that takes in 1 hour to the “Lej Muragl”, and than easily reach the route that cames up from the base of the valley.

Climb the remaining slope until the saddle between the Piz Clüx and the Piz Muragl. From there an smooth snowy flank take to the base of the summit. Some siple passages of rocks and the top is won!!

From the top follow the same route during the descent. Best choice could be start from the up station (700m drop) and ski down till the car park.

Do not ski into the sledding pist because it is strictly forbidden!

The route can be rated BS

Video of a ski route made in february 2012