At 3124m Piz Nuna is the highest mountain of the Macun Subgroup of the Sesvenna Group, itself a part of the Rhaetian Alps. The subgroup is located at the western tip of the triangular Sesvenna Group between the Inn and Spöl Valleys, high above Zernez, the main village of the area. It is most famous for the Macun Lakes, glacier formed lakes, lying in the cirque which is formed by the horseshoe-like subgroup. Piz Nuna is located a bit to the east of the horseshoe, and lies at the ends of three valleys: Val Nuna, Val Sampuoir and Val Laschadura.

Piz Nuna is made up from main dolomite, like much of the rest of the Sesvenna Group, which is also dubbed as Engadin Dolomites. When seen from the north its three peaked summit looks very impressive while the eastern and western aspects are rather tame. To the north of the mountain, to its north-western slopes you can find one of the last glaciers of the area, Vadret da Nuna, which like the somewhat larger Sesvenna glacier is vanishing fast. At the end of the summer season only little remains to be seen of it while the bulk is buried beneath the debris of rockfall. Rockfall, indeed, is one of the main hazards in the Sesvenna Group which is notorious for the brittleness of it rock.

Given its location and elevation, Piz Nuna is considered to be one of the most important lookout peaks of the area with exceptional views to the Ortler / Ortles Group, the Bernina Group and the Silvretta Group, all of which are among the most important mountain ranges of the eastern Alps. Reaching the summmit, however, turns out to be quite an undertakking. The shortest route starts at the Ofenpass / Pass dal Fuorn Road, at the mouth of Val Laschadura, about 3km east of Zernez. As the starting point is located at some 1750m a huge elevation difference has to be scaled. The normal route leads to Fuorcla Stragliavita from where an exposed traverse of the south-east ridge leads to the summit (sections of UIAA II). Also very recommendable: the ridge traverse from Piz Nuna across Piz Macun to the north. And last but not least: the normal route is also a popular ski tour with the descent through the couloir's on the north-eastern side. Piz Nuna and the surrounding western tip of the Sesvenna Group belong to Schweizerischer Nationalpark / Parco Nazionale Svizzero which has severe restrictions. For instance you are not allowed to leave trails or to park cars only in designated areas.

Find more information on the websites of the parks: Piz Nuna seen from the south 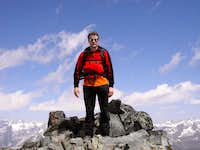 The picture above was taken on the summit of Piz Nuna on June 28th 2006.