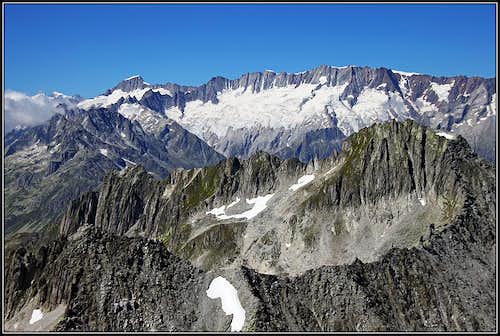 The view on Dammastock range from the summit of Piz Tiarms

If you drive over the Alps, it is a good idea to stop on high passes and consider if the nearby summits can offer you a good climb. Often the rewards are big. A two or three hours ascent can bring you on high altitudes and if weather serves you well, the views from such summits are as nice as the views from more remote ones. The price for that is of course popularity. Tourists think similarly, so the summits above the high road passes are usually very frequented. Piz Tiarms is one of such summits, although it is not so easy to ascend and consequently also not so frequented. It rises just north of Oberalppass, 2044 m, in Glarus Alps, Central Switzerland.

In the area around Oberalppass the mountains are built of metamorphic rocks. As natural forces pushed them towards the sky, vertical lines predominate. The mountains are sharp and some of them also hard to be climbed. Also Piz Tiarms looks so, but its SW and W side still allows us to climb up relatively easily. It is also interesting that the area is abundant with minerals. You don't need to turn over a lot of rocks to find examples of them. More precious ones are of course already picked up or still hidden underground.

Geographically, Piz Tiarms is the last summit in the long crest which runs from Bristen, 3073 m, on the north, over Piz Giuv, 3096 m, and further towards the south on Piz Tiarms, beyond which the crest lowers down on Oberalppass. This crest accompanies on the east the long Fellital (valley). On Piz Giuv an even stronger crest deters towards the NE, towards the Oberalpstock, 3328 m, which is the central feature of that area. Further on that crest accompanies the whole Vorderhein valley. On the western side of Fellital a similar crest runs to the one of Bristen. It culminates on Rienzenstock, 2962 m. The view on that ridge accompanies you all the time of Piz Tiarms ascent.

he view from the summit is really nice. No need to start naming hundreds of mountains around, which names I don't know anyway. Just to underline - to me the most impressive was the view on the long walls of Dammastock and also on the highest summits of Bern Alps, peeking up on the horizon. Of course I was also trying to identify some other high summits around, especially towards the north and the south-east.

And, as usual: As I ascended Piz Tiarms only once and is very unlikely to repeat the visit in that narrow area, I am absolutely sure that many of SummitPosters have more information about this mountain. I will be more than happy to give you the rights over this page, so you can improve it from this almost draft stage. Welcome! 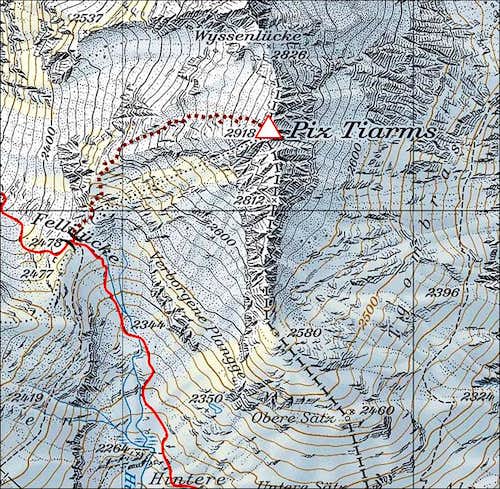 Almost all visitors ascend Piz Tiarms from Oberalppass. This important saddle connects the Central Swiss hub of transport routes around Andermatt with the Rhine valley on the east. So, you can reach Oberalp either from Andermatt on the W-SW, or from Disentis on the E-NE (in the Vorderrhein valley). On the pass there are big parking places, a lot of room also for camper cars.

Due to not extremely high altitude, over Oberalp saddle also a railroad goes. If you are travelling around Switzerland in a bit different way - with their excellent rail service, you may perhaps also break the travel on Oberalp for some 6 hours and climb Piz Tiarms. A similar plan can be of course also executed by getting there with regular bus service.

Actually I can describe only one route on Piz Tiarms. If you arte knowledgeable of others, please add them!

From Oberalppass, 2044 m, you go by the well marked path towards the north. Be careful not to go by the mountain road (and marks) towards the east, on Pass Tiarms, 2137 m! Our path first crosses the slopes above the Oberalppass towards the left, until it reaches the lively creek of Hinterfellibach, flowing from the north into Oberalpsee. Then you continue along the creek. The valley has one or two more distinct steps, above which the creek meanders across more flat valley parts. The path keeps mostly right of the creek (looking upwards). In good one hour you should be able to reach Felliluecke, 2478 m, the important saddle between Piz Tiarms on the right and Schneehuenerstock on the left. On the latter we see military objects.

Felliluecke is the saddle from which towards the north the long Fellital (valley) descends. But we don't follow the marked path down into it. On the saddle you must turn right, towards the W-SW ridge of Piz Tiarms. You will hardly find a weak path, and if so, only in the beginning. Some 100 meters higher it's already a completely pathless terrain and only a few weird ciarns can guide you up, if at all. When going up from the saddle, keep left, especially in the beginning. Gain the W-SW ridge first and only then turn towards the summit.

Don't do the mistake we did!

Leaving Felliluecke, we did a silly mistake. As the terrain is passable everywhere, we went directly towards the summit rocks. Following weak goat paths and being amused with searching crystals, the terrain was turning us more and more towards the right. Realising that there are no marks, nor ciarns, I finally went left on the ridge, but I was already too high to see any presence of human traces. So, I returned back to Jasmina and we crossed the slopes right, more into the SW flank. It was August 11th and a few snow fields alowed us only one passage up (the second one was not seen yet). A steep, rubble terrain lead us into a short gully which promised the passage. In its entry I found a broken pole, so I tried further. But after a few meters of climbing I decided to turn back. The reason was, I did not know how sharp the ridge above was. Later it turned out that if I would climb some 15 more meters, and if Jasmina would be able to climb the gully as well (it was UIAA II climb), above we could continue across the ridge and climb the summit over the west flank. But I turned back, then we descended some 50 meters and crossed around the W-SW ride, finding the normal route up.

So, going up you keep left of the W-SW ridge and there the passages are really easy. The biggest problem are big rocks, which can be very unstable. Those boulders are scattered everywhere, on the whole slope. There's no way to create a path or to describe the best passage. Try following rare ciarns or trust your common sense. Looking up, you see the summit rocks and it is best to aim to the ridge a bit left of them. Bellow the summit the slope gets steeper and over the boulders some easy climbing is required. If you choose well, it should nowhere exceed UIAA I degree. Finally you gain the N ridge and there are only a few more meters of the ascent on top.

The summit consists of scattered boulders which you must climb. Some power and balance is needed to pull up, but it's certainly worth doing that last effort. The panorama from the top of that rock is very nice!

In winter many visitors do this ascent as a demanding ski tour. That can be understandable. The big rocks and boulders must be covered with snow and all the balancing over them disappears. But the very top of Piz Tiarms is not a typical ski summit, although you can reach very high. The majority of climbers ascend in winter and spring the saddle (2826 m) between Piz Tiarms (on the right) and Wyssen on the left. There they turn right and climb the north ridge of Piz Tiarms. The altitude of ski depot depends on snow conditions, but the whole north ridge requires climbing of UIAA III degree, and avoiding difficult ridge towers by the western side. The second advice for a winter ascent is to try to reach as high as possible towards the top by the western slope. Except the summit part, the rest of skiing is not too difficult.

In different sources you can read that also the whole south ridge of Piz Tiarms is not too difficult to climb. But that is also in summer conditions a real climb of more or less constant UIAA II degree.

Any time of a season. In a hard winter conditions the upper part can become dangerous, requiring a full winter equipment (ice pick, crampons).