Hike up on Pizzo Centrale is nice and panoramic 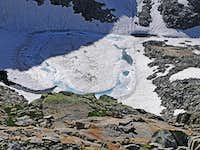 A small lake south of the summit

While the central Ticino/Tessin mountain group is quite big, some other groups of Lepontine Alps / Lepontische Alpen are smaller. Between the well known road passes of San Gottardo / St Gotthard and Lucomagno/Lukmanier a smaller group of mountains stretches, named b its highes peak Piz Blas Group. Piz Blas itself is 3019 m high, but I guess the most popular and for hikers important mountain in that group is Pizzo Centrale. The summit was once even labelled with the altitude of 3003 m, the nowadays measures give it with the Swiss precision 2999.3 meters. Well, at the end it is important that your head is above 3000 meters, while standing atop of it.

The (old) name of this mountain is also Tritthorn and can be found on some Swiss maps.

The popularity of Pizzo Centrale for sure originates in the nice panorama it offers. The summit has really a central position, rising in the ridge which divides the southern valleys of Ticino/Tessin and the central Swiss valley around Andermatt. Its popularity goes also to the proximity of one of the most importand high road passes over Alps - San Gottardo / St Gotthard, 2091 m. After overcoming it, you've done passing the Alps, while most of other passes bring you into a valley from which you must overcome another pass to cross the whole chain of Alps. The traffic over San Gottardo / St Gotthard is dense and also all the three roads are very picturesque. The highway of course the least (but is the fastest), the normal road is quick and nice and the old "La Tremola" is a pearl of past road engineering. While crossing San Gottardo / St Gotthard you can visit many places of high historical value - too many to mention them all. So, devote for a simple drive over the pass a whole day and do a lot of stops to see the nearby landmarks.

A half day hike up on Pizzo Centralle will take you into a touristically quite developed mountain area around the artificial Lago della Sella and then by a sufficiently well marked, but not just trivial and easy path on the panoramic summit. Above, you are on your own and the nature is still completely unspoiled. If you have some imagination, you can even start searching off the path for crystals, embedded in the St. Gotthard granite. In times of tour skiing the slopes from Guspissattel down to the Sella lake are done also with skis.

Just NE of San Gottardo / St Gotthard Monte Prosa, 2737 m is rising. From it towards the NE the ridge goes to the Point 2782, where it branches. Towards the E the ridge continues on Sellaboedeli, 2828 m, then to Gamsspitz, 2925 m, and finally further towards the NE on Pizzo Centrale. And from the highest peak the ridge continues towards the east - over the East foresummit, 2986 m, and further towards the east and southeast. The narrow group of Pizzo Centrale ends on Rotstockluecke (saddle), 2785 m. From the main ridge (from Gamsspitz and East peak) weaker south ridges go, and among them in high basins there are a few smaller lakes. Southeast of Pizzo Centrale there is a big artificial Lago della Sella, 2256 m. The northern side of the main ridge is wilder and not so much visited. Just north of the main summit there is a smaller glacier, called Ober Schatzfirn. 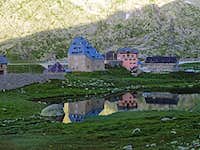 Almost all visitors of Pizzo Centrale will start the tour on San Gottardo / St Gotthard pass. A narrow asphalt road goes further to Lago della Sella, but it is closed for public traffic. For mountain biking it is very appropriate, but in the last part also quite steep. Using a bike you would still save quite some time, especially on the return.

Approacher from other sides are much longer. A quite popular trail is passing by Pizzo Centrale, connecting San Gottardo / St Gotthard with the summit of Gemsstock, 2961 m, which a cable car from Andermatt reaches. But from that path (going over the notch by Gloggentuermli) rarely anybody would do a side jump on Pizzo Centrale. Northeast of Pizzo Centrale there is the valley end of Unteralp valley, which can be also reached from Andermatt. There the Vermigelhuette stands, 2042 m, but the ascent from there on Pizzo Centrale would for normal hikers again go much around (over Passo della Sella) and then by a mostly pathless terrain on top.


See the Pizzo Centrale on a bigger map.

On the S ridge of Gamsspitz

There's only one hiking path on Pizzo Centrale - the one from Lago della Sella. I will describe it on a separate page. The route ascends over the grassy slopes north of the lake, then climbs on the rocky balcony of Sasso di Paisgion, crosses the slanted plateau to the south ridge of Gamsspitz, crosses it and over some more steep slopes ascends the Guspissattel and from it the highest point. By the Swiss Hiking Scale the route difficulty is rated T3, from St. Gotthard pass you need on top some 3 h.

The mountain ridges are sharp, but still not sharp enough to prevent skilled mountaineers to scramble by various routes on top. If one would follow the ridges from the west or from the east, the difficulty of routes would be T5 (by the Swiss Hiking Scale), with some easy climbing details of UIAA II difficulty.

In times of tour skiing people don't follow the normal route. They go instead till the end of Sella lake (till Capanna di Val Torta) and there turn north. Quite steep slopes bring them directly below the southern ridge of Gamsspitz, then they cross it and follow the normal route on top. The last 100 meters of altitude you would normally do on foot.

No special restrictions in the area. The road from San Gottardo / St Gotthard to Lago della Sella is closed for public traffic.

You can climb Pizzo Centrale most comfortably in snow-free times of season. That would be typically from July till November. Early in summer below Guspissattel you will have to cross snowfields (we had them even in August), but they are not very steep and when there's not much snow left, people usually do the tour without ice picks.

In winter condition the ascent requires ice pick and crampons and if icy on top also other measures of security. For a ski tour the southern slopes of the mountain must be safe of avalanches, because they are quite steep.

Besides the tourist facilities on San Gottardo / St Gotthard pass there is no other supporting infrastructure. And it is not needed, because you are challenged only by a half day tour. As said, far on the northeast, in the Unteralp valley, there is also Vermigelhuette, 2042 m.

May be you have the following information - or anything else, valuable for knowing Pizzo Centrale: