It appears from all sides as a regular pyramid with three ridges.
It's bordered from W by the "Passo Verva", from N by the "Bocchetta di Selva" and from S by the "Colle di Pizzo".

It's particularly impressive and rocky when viewed from the entrance of "Val Viola", perhaps even more than its neighbour,"Cima Piazzi".
It takes the name from the "Alpe Dosdè", which is a meadows placed at its foot, and it closes the circular chain of mountains that begin with the "Corno di Dosdè".

It is normally climbed from S or E for the spectacular view to the whole region around.
The summit is reached however, more frequently during the spring along the classic skimoutaineering route from the "Valley of Dosdè".
On the W side, were recently opened two interesting climbing routes. 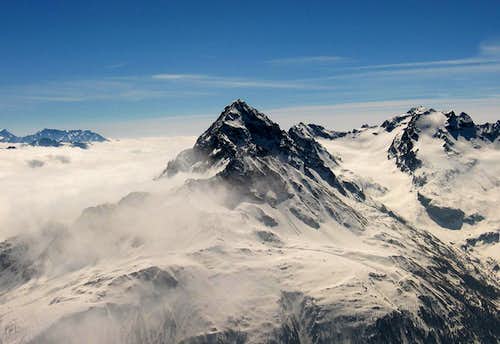 For every routes, the starting point is the "Val Viola".
From the hamlet of "Arnoga" 1800m, get into the narrow paved road open from the mid of april till the mid of november.
The road crosses the entire valley and leads to the refuge "Viola".

From Milan by car:
Road route "Vallassina" number 36 to Lecco and then to Colico (north side Como lake) and then Stelvio statal route to Morbegno, Sondrio, Tirano and then to Bormio (three hours). After Bormio take the indication to Valdidentro/Livigno.
FROM MILAN BY TRAIN AND BUS: take a train in the Milan Central station destination Tirano and then a bus to Bormio (4 hours).

From Sud Tirol across the Stelvio pass:
From Bozen (Alto Adige on the highway between Innsbruck and Verona) to Merano by main route and the by local route through Venosta Valley follow the signals to Stelvio mountain pass (2700 meters, the highest mountain pass reaching by car, open only in the summer period). From here to Bormio (3 hours and half from Bozen, Stelvio pass requires 44 bends to go up and 15 to go down).

From Sankt Moritz (CH):
Go to Pontresina and then follow the signals to Bernina pass. Turn left when you look the indication to Livigno (I) through Forcola pass (open only in summer period) and then from Livigno through Foscagno pass (2200 meters, open all the year) to Bormio (3 hours).

From Mustertall (CH):
Follow the signals to Giogo di Santa Maria (Pab Umbrail) on the border between Switzerland and Italy and then to Bormio (1 hour and half, border near Stelvio pass, open only in the summer period).

From Germany or Austria:
On highways via either Innsbruck or Bregenz to Landeck and then following Staatsstraße S 13 to the italian border at the Reschenpass / Passo di Resia . There the Vinschgau / Val Venosta valley starts that represents the northern border of Ortles-Cevedale group. At Prad the Trafoi valley starts that leads either to Sulden / Solda or via Stilfser Joch / Passo di Stelvio to Bormio. 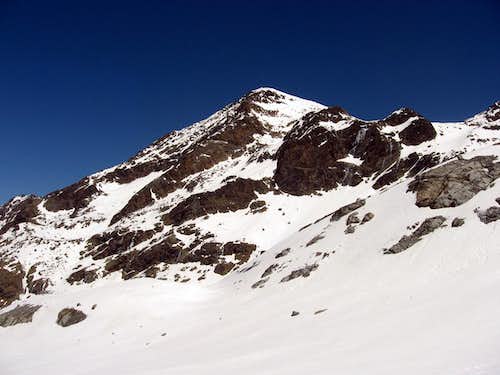 From E and the S ridge: Normal route
From the road to "Passo di Verva" follow the stone piles till the "Colle di Pizzo". From here follow the south ridge - 1000m drop - diff. F

From SW and the S ridge:
From the "Alpe Dosdè", get into the valley of Dosdè and the homonymous glacier. From here follow the easy slopes to the summit - 1160m drop - diff. PD
This is the same way for the skimoutaineering route - diff. BS

From the SW ridge:
From the "Alpe Dosdè", follow the previous route till a morraine, cross it and reach a couloir at the foot of the SW ridge. Fine route - 500m drop - III° AD

From the NW pillar: via "Cercando il sole"
The same route from "Alpe Dosdè", but get to the north side of the mountain till the foot of the NW ridge. Very fine route - 400m drop - doff. TD- VI°/VI°+ 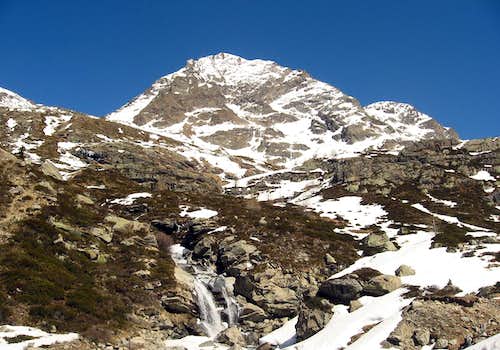 Bivouac "Caldarini" 2556m
The bivouacs is located at the foot of Cima Settentrionale. At the junction between the "Val Dosdè" and the "Val Contone di Dosdè".
9 sleep places. From Arnoga in 2h. 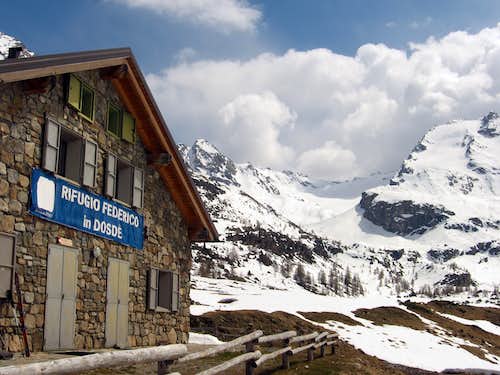 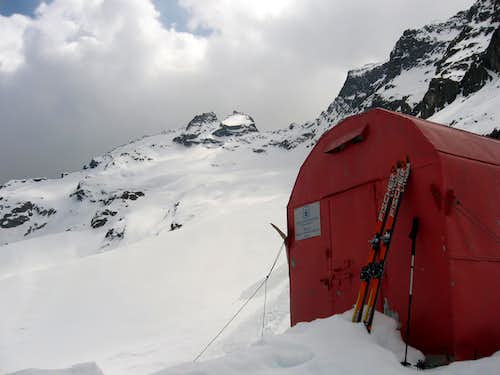