The lakes of Val Piora - one of the most delightful views on the round hike
The group of Piz Blas, 3019 m, consists of a few 3000-ers and stretches between the famous St. Gotthard Pass on the west and also already since the Ancient Roman times used Passo del Lucomagno on the east. From the main crest many side ridges go towards the north, but south of it stretches a nice high mountain area with valleys oriented in the west-east direction. A special characteristic of St. Gotthard mountains is abundance of lakes, which is not unusual, as the whole area is predominantly built of solid granite. The majority of them lies in these two valleys and their high basins. These are the valleys of Val Cadlimo and Val Piora. Then further towards the south the last ridge stretches above the deep Valle Leventina, culminating in Pizzo del Sole, 2773 m. Just in the middle of the area which is most densely dotted with nice lakes, a not much spectacular mountain rises, reaching only an altitude of 2667 meters. Even if the mountain itself is nothing special, it is a nice hiking goal and on any route on its top you can experience a most beautiful Tessin/Ticino landscape. As the lower area is easily reachable, at least from the south, from Valle Leventina, by the lakes many people simply spend time, doing easy hiking around. Only 800 m higher, visitors are already rare. And even they mostly go by the marked paths, which connect huts. The summit of Pizzo Taneda has a lot of big cairns, but much less visitors. It is mostly visited by hikers who include the short summit ascent into a broader hike over the high saddles. That's what we did as well. In winter, the summit must be a nice goal for skiers, only that Val Cadlimo does not end very nicely near Passo del Lucomagno. And, it is not a secret, the whole area is very rich with minerals, which can also attract some visitors.

Its central position enables Pizzo Taneda nice views on the nearby mountain area, but only towards the west and south views are flying far. There are the high mountains west of St. Gotthard and south of them the broad area of Tessin/Ticino mountains, with Basodino, Cristallina, Pizzo Campo Tencia and other summits. As even in the ridge between Val Cadlimo and Val Piora Pizzo Taneda is not the highest summit (east of it Schenaduei, 2747 m, is higher), those views are a bit obscured, and so are of course the views towards the north, on the not so attractive southern slopes of Piz Blas and its neighbouring 3000-ers.

Passo del Lucomagno
A big majority of Taneda visitors come in the area from Valle Leventina, using the funicular from Piotta, 786 m. On the length of 1369 m it makes 785 m of elevation gain and is so with 87,8% gradient one of the steepest in the world. The funicular brings you close to the southern shore of Lago Ritom, which is on 1850 m of altitude. But there also a mountain road reaches, continuing as high as to Cadagno lake, 1921 m. The second good starting point for tours on Pizzo Taneda is Passo del Lucomagno, 1915 m. There starts a very nice round tour on which we can combine visits of Val Piora and Val Cadlimo. 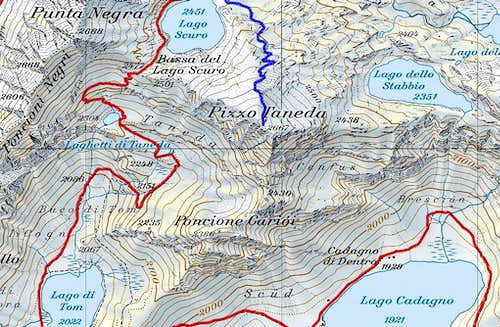 Click here to see the on-line map!
On a special page I will describe the beautiful round tour from Passo del Lucomagno. It combines the two routes with starting point on that saddle. The third route is from Lago Ritom and is in the upper part identical with the Val Piora route. Here is only basic information: Just a comment regarding the summit ascent: It goes by the northern slopes, which are easily passable. The path is beaten by the eastern shore of Lago Scuro. Not much harder is the pathless ascent by the western ridge.

Images From the Pizzo Taneda Round Tour

Below is just a set of images from the nice round tour, combining the above Val di Piora and Val Cadlimo routes. See a detailed route description on the child page!

No special restriction in the nearby area. 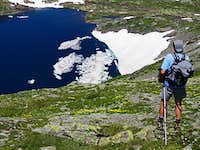 Summer near Lago Cadagno
Pizzo Taneda can be climbed any time of the year. In winter it is to consider if in deeper snow the southern ascent is safe. The northern side is ideal for skiing, but Val Cadlimo probably does not end very nicely for skiing.

If you visited the area, the following additional information is mostly needed: