Plešivec (2184 m) is part of the Loška Stena group. Plešivec is the northernmost peak of Loška Stena, orographically the first summit of the array, and it is the lowest among the main peaks. From the summit, the view of both Mangart and Jalovec is perfect, the south side of Jalovec and the south and east sides of Mangart being just across the upper Koritnica valley.

The Plešivec southeast face is turned towards the Bala valley, the very steep slopes being a mixture of rock and grass, so as those of the neighbouring Bavh. As far as summer hiking/scrambling is concerned, Plešivec is by far the easiest summit of Loška Stena. The standard ascent starts at the Čez Brežiče col (at ca 2000 m altitude). From the col, the gain to the summit is less than 200 m. Not only is it a short ascent (less than an hour), but there are no technical difficulties to overcome, and exposition is minimal. However, the path is unmarked and faint at times (one passage also tends to change slightly over the years, due to minor earth slides which may occur in the springtime). Another possible "problem" in late spring or early summer is snow which might still be present along the slopes just below the col.

Both the north face and the northwest face of Plešivec are in the Koritnica valley. First climbed in the early 1980s, the north face is easy to approach. It features climbs 300 m to 400 m tall, graded UIAA VI- to VIII.

The northwest face is divided in two: the right part, on which lines were opened, and the left part with a persisting central problem. The first ascent (and descent) of the Plešivec northwest face was performed by hunters and beaters in the past centuries (UIAA IV/III, ca. 1000 m tall, exposed, "very steep grass"). 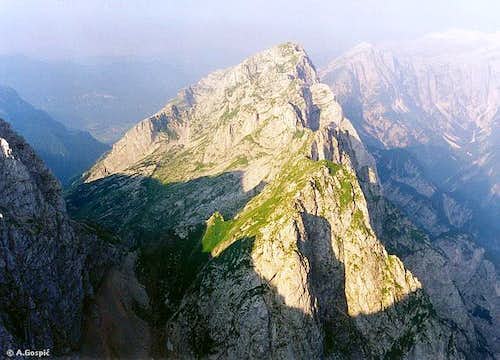 Loska Stena from Jalovec
There are two major gendarmes to the west of the col. The path starts by descending a little on the north side and circles the obstacle at its base before reaching a grassy saddle. Soon then avoid difficulties to the left. Next follow the still faint path along partially grass covered, lower angle slopes to the summit.