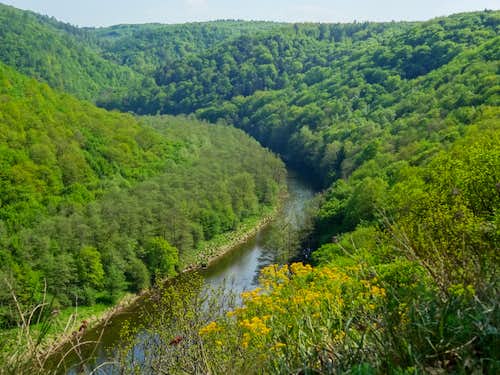 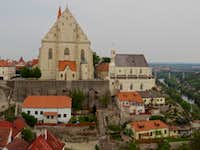 Podyji (Czech name for the park) or Thayatal (German name) National Park is located on the border of the Czech Republic and Austria, near the place where I grew up and my family still lives. It was inaccessible until 1991 since it was a border zone, and obviously communist Czechoslovakia could not keep in touch with their capitalist neighbor = Austria... it seems now nearly like a forgotten history. You do not even realize when you are crossing the little bridge inside the park from one country into another one.

Podyji National Park is located in South Moravian Region of the Czech Republic. It protects near natural forests along the deep Dyje River valley. It is a biom whose well preserved state is unique in Central Europe. It concets to the smaller National Park Thayatal in Austria. Historically the area of land between the Czech towns of Vranov nad Dyji and Znojmo was a natural reservation since 1978, the part close to the border with Austria was closed to any type of visitation for over 40 years, which actually helped preserving the area during the communist time. Podyji became a national park in 1991 after the political changes in the Czech Republic. In the austrian part of the park is important the year of 1984, when many people protested against building a dam over the river Dyje (= Thaya is the austrian name). This dam would flood most of the park's ecosystem. In 1988 the Austrians declared the area as a protected land - Naturschutzgebiet Thayatal, and in 2000 this area became a national park. Both countries closely co-operate in protecting this land, in maintaining tourist trails, and in regulation of the local fauna (especially fishing and hunting).

Podyji=Thayatal has an old history of tourism. The first visitors came there in early 1900, and hiked along the river Dyje (Czech name) or Thaya as it is known in Austria. There were bridges across the river, and during that time, it was one country - Austrian Empire. Even after the end of the WWI, when Austria and Czechoslovakia were formed, tourism continued, and people crossed one country into another to admire the park from both sides. And then came the dark year of 1948, and the communists gave visitors a stop. The park became inaccessible, and anyone seen in that area was risking his/her life.

The river Dyje = Thaya flows inside a canyon, which is in places 220 meters deep. Most of the similar canyons in the Czech republic were changed by building dams and power stations.

The area is hilly and heavily forested. The canyon along the river Dyje (=Thaya) would have been typically dammed if the location would have been different. The proximity to the austrian border protected any type of development here. 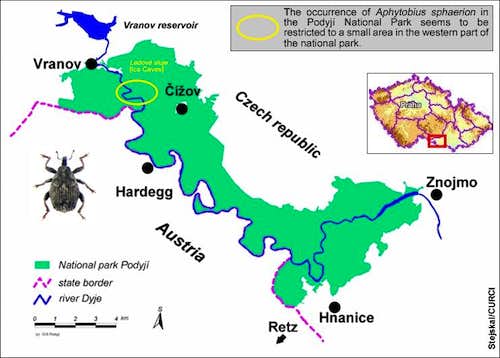 Podyji is the smallest Czech National Park. Again the land is exceptionally well preserved river valley in a richly wooded landscape. It is located right on the border with Austria. Due to restrictions of the Iron Curtain the area was completely inaccessible for many years.
How To Get Here:
Air Travel: The nearest airports are in Brno (80 km away, but with only Ryanair running flights Brno-London, Smart Wings Brno-Moscow, and Smart Wings Brno-Girona). Vienna airport is 100 km away, and Prague airport is 200 km away.
Bus: There are regular buses from Prague (bus station Florenc 3-6x a day) and Brno to Znojmo.
By Train: There are trains to and from Vienna (Znojmo-Vienna) every 2 hrs. The journey takes about 90 minutes.
By Car: There is no direct highway to Znojmo or Podyji N.P. From Prague use the highway to Brno, exit via Jihlava. From Brno use the motorway to Mikulov, exit behind Pohorelice.

Podyji = Thayatal National Park offers more than 100 km of hiking trails. The hiking routes bring you to to explore the river valley, ascend to rocky overlooks, and lead to many historical landmarks within the park.
On the Czech side the trails are marked by the Czech Tourist Club marking system. The trails are easy to follow.
On the austrian side there are signs with the name of the tour and a logo of Thayatal National Park.
The Czech side of the park is also popular with cyclists with designated paths. You can cycle on existing roads in Austria.

Done with hiking? Time for drinking? 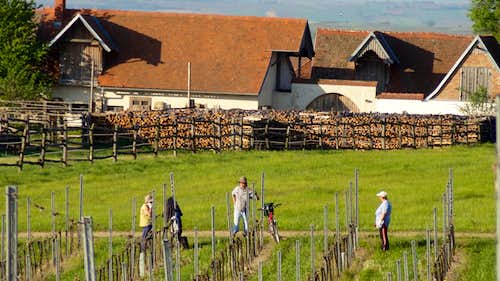 People working at the Havraniky wineyards 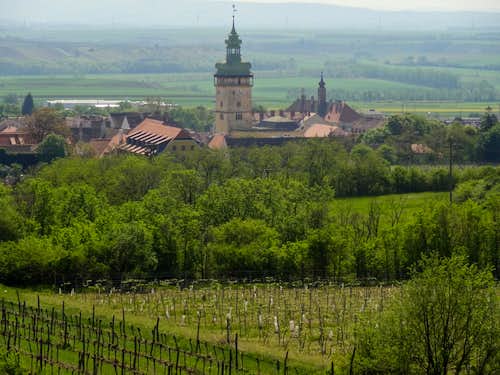 Retz behind the wineyards
Although Czechs are famous for their beer drinking, the area around Podyji is famous for its wine. Some say it is one of the best in Europe, but this can be argued. Many of the vineyards are on sunny south facing slopes sheltered from the wind, and the weather is relatively warm here. The area is popular with cycling trails along vineyards with the goal of some wine tasting.