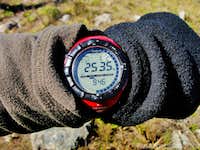 Summit, the altitude.
Point 2535 is a secondary summit of Pedra Furada massif (keep in mind that the altitude on Pedra Furada page here on summitpost is wrong, the right altitude is 2.589m high/ also the coordinates are wrong for Pedra Furada, the right would be: Latitude=-22.35926°, Longitude=-44.72446°), slightly smaller than Pedra Furada itself. It doesn’t have a name or a proper recognition. But as a high point inside Itatiaia National Park, I think it deserves its own mountain page here. As almost nobody goes there, there's no trail. After the rain season the woods grow up pretty good and hide the only possible path. And again, as nobody goes there, nature takes care of itself. This one time I had the entire park almost to myself only since everyone was looking at the weather forecast and the news wasn’t so good, rain storms. But I actually didn’t care about that and went to the park anyway. It turns out I got lucky, the weather was great and I summited in a couple of days seven mountains, including this one, in which top I assembled a brand new cairn to mark its highest point at 2.535 meters high. That was in 2009. 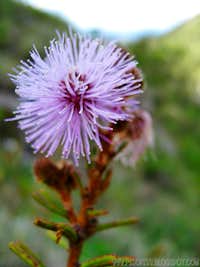 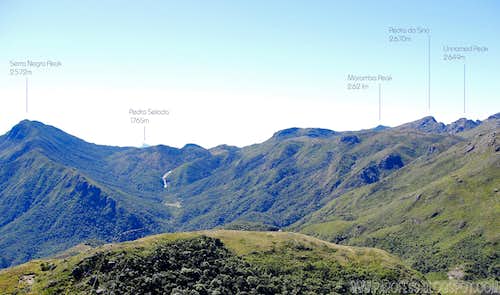 Informative summit view to EAST.
From Minais Gerais/ São Paulo/ Rio de Janeiro, you have to take a bus to a little city called Itanhandú. Several bus companies can take you there. Once you get to Itanhandú, take a nother bus from the same bus station to Itamonte, a smaller town, at the bottom of the Sierra.

There is the point: Once you get to Itamonte, it is hard to find transport to the park entrance. But there's some taxi drivers that know the park and can take you up to the park, and that's gonna cost you around R$ 100,00 (about US$ 45.00).

To this mountain, you must follow the same route to Pedra Furada Peak, but as soon as you get to its base at around 2.400m high, turn RIGHT looking at an old part colapsed house, since there is no trail, just head towards the highest point as you wish. Don't expect this to be hard, more like a nice walk in the mountains. From Alsene camp site, in and out, should take around 4 to 5 hours.

The Park has hard rules.
Don't bring drinks; Inflamable fuel; Knives and fire arms.
There is electric power inside the hut and that's all. Therefore, take the whole equipment needed, like flashlights, headlamps, stoves, food and proper clothing. The trails are relatively easy, but for the unexperienced mountaineer it can become tricky, mainly if you get lost.

Taxes to visit and to climb inside the park:
US$ 2 person per day to sleep at the hut and US$ 6 for entry (once);
There is a parking lot by the park entrance.

Be careful not to step over one of these:
The Maldonada Redbelly Toad (Melanophryniscus moreirae) is a species of toad in the Bufonidae family. It is endemic to Brazil. Its natural habitats are subtropical or tropical high-altitude grassland, swamps, and intermittent freshwater marshes. His name here at Brazil is "Sapo Flamenguinho". It takes that name because of the brazilian football team Flamengo (it has the same colors: black and red.
He was chosen to be symbol of the park. This frog lives only in this area. That´s why they don´t allow cars inside the Itatiaia National Park during the breeding season (between december and february). 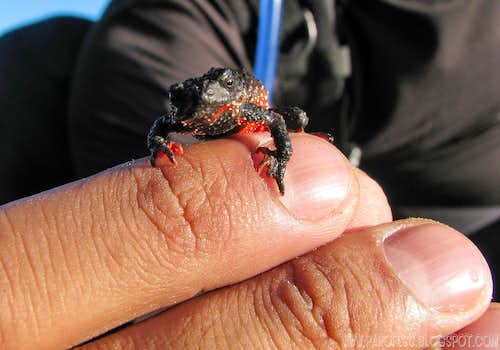 Not many options for this. Since the great fire that happened some ten years ago, caused by two lost boys on the woods of Itatiaia National Park, wild camping was forbidden, and strongly watched by military people. But now it can be done again by the hut, but it has only room for 10 tents (30 people).

The best option is to stay in town and drive up to the park, and summit the mountain in the same day, you can do it easy with Pedra Furada Peak as well.