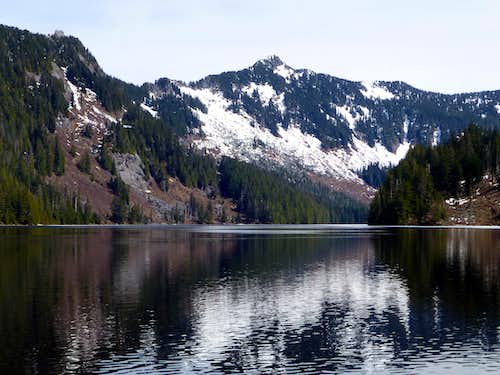 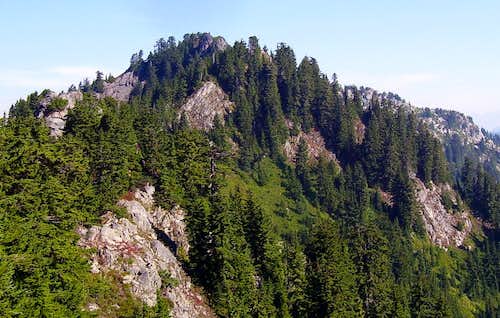 Point 5150 - Ragged Ridge High Point from the south
Point 5150 is the rather unimaginative designation given to the high point of Ragged Ridge, located about three miles north of the town of Index. Boasting good views, beautiful lakes, and over 1000' of prominence, this peak certainly deserves a proper name. Until I hear differently, however, I will refer to it as Point 5150 (I suppose the fact that Van Halen has an album titled "5150" gives this mountain a certain level of coolness). I had planned a climb of this peak for a few years, and had several different ideas for approaching it. I finally settled on a creek drainage approach from the south that I had viewed from Mt. Persis. It turned out to be a fairly quick, simple, brush free access to Ragged Ridge (2.5 hours up, 2.0 hours down), and is probably the easiest way to access this area (again, until I hear different).

This climb starts from the Deer Creek Flat area, which is accessed from Reiter Road (just east of Gold Bar on US2). After 3.5 miles on Reiter Road, look for a gravel road on the left, and a blue sign for "Reiter Foothills Forest". This is a DNR access, and will require a Discovery Pass. Follow this gravel road for about four miles to the unmistakable creek drainage located at N47 50.273 W121 33.740 (Elev. 1900'). 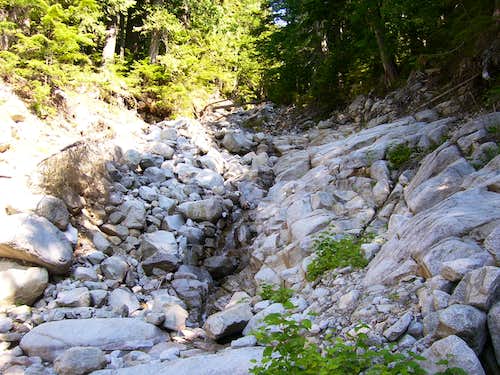 Note: I did this climb in September with low water. I have no information on the feasibility of this route in early season when water levels are higher.

For the most part, it is possible to stay in the creek bed. I avoided one small waterfall at about 2200' by diverting into the woods to the left. At about 2500', the creek bed splits into two waterfalls. Here, I scrambled up the wooded rib between the two falls with no difficulty. Continue up the creek bed to about 3500', where the creek will abruptly flatten out. Continue upstream about 200', then turn uphill to the left. In about 100', you will arrive at the base of a talus slope. Head north along the base of this talus (paralleling the creek) - it will open up into a large talus slope after several hundred yards. 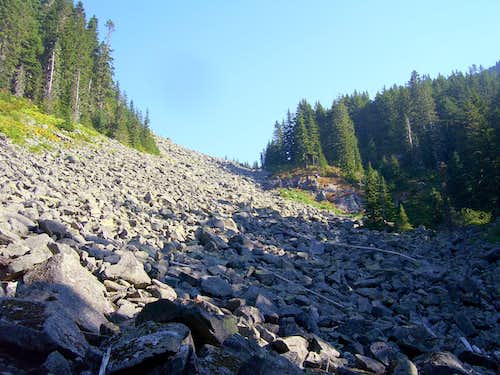 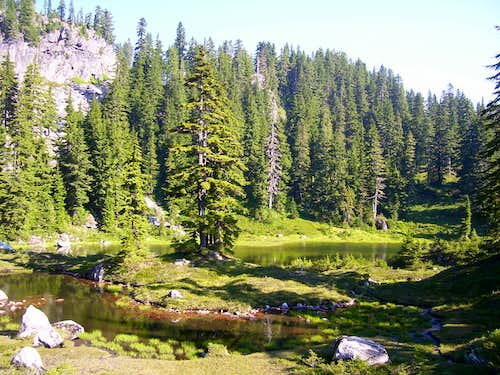 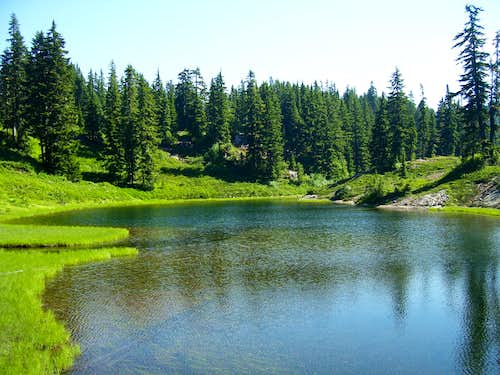 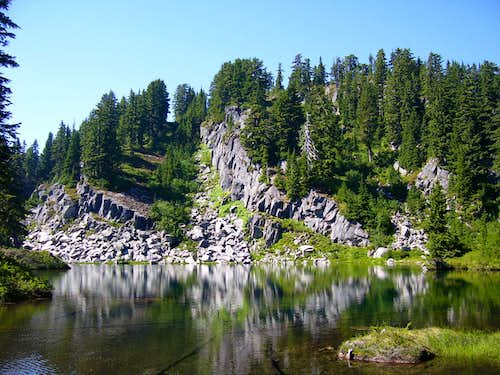 Note: It is possible to scramble directly from Lake #1 to Lake #3, but who would want to skip Lake #2? 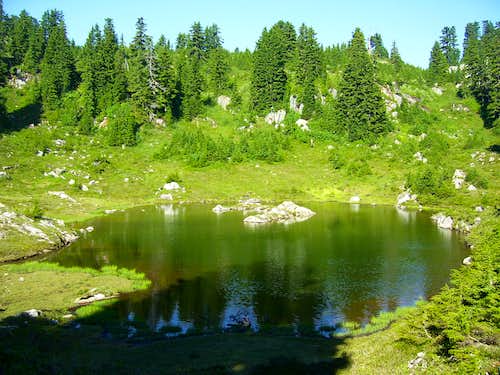 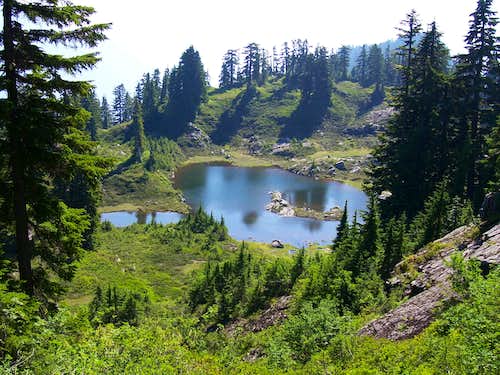 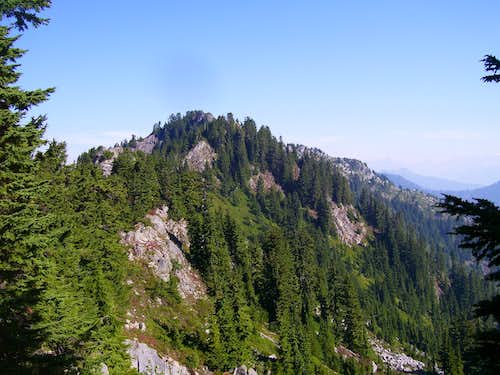 Looking towards summit of Point 5150 (Ragged Ridge) from the south

Follow the south ridge about 0.7 miles to point 5150's summit, generally staying close to the ridge crest on the right (east) side. About 0.2 miles from the summit, I ran into a small cliff band that I wanted to avoid. I dropped down on the right side of the ridge about 200', traversed, and came back to the ridge crest at a small saddle about 400' south of the summit. From here, it was easy scrambling to the top. I'm not sure if it would be feasible to bypass the cliff band on the left (west) side of the ridge to avoid the altitude loss, as I did not explore this option. 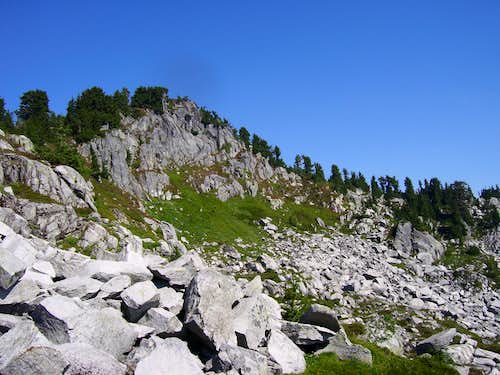 Here are a few views from the top. Sorry about the image quality - it was a very hazy day. 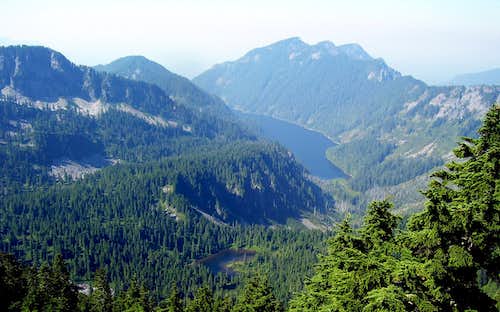 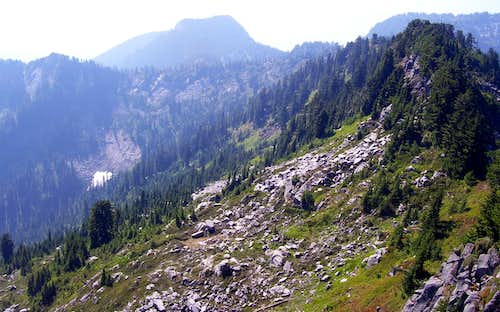 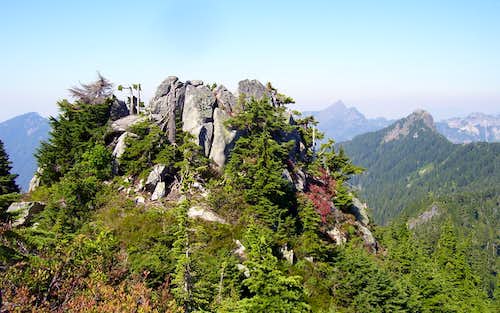 Turn north on Reiter Road just east of Gold Bar on US2. Follow Reiter Road 3.5 miles to the DNR access for "Reiter Foothills Forest". Follow this gravel road for about four miles to the obvious creek bed at the beginning of the route. 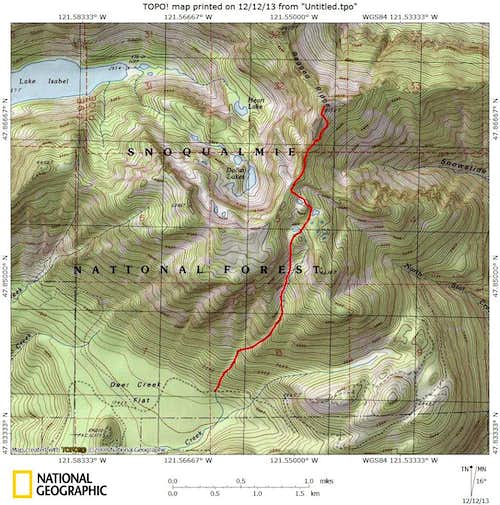 A Discovery Pass will be required for this area. Please see the Washington State Department of Natural Resources web site for the latest road information.

The best camping on this route would be at one of the three small lakes described in the route section. Lake #2 is the largest, and does appear to have some fish in it.