Point 8300 (unofficially known as Mayan Temple to locals) is the highest peak in the Rincon (Spanish for corner) spur of the Sandia Mountains located just east of Albuquerque, New Mexico. It is most easily seen as the pointy, pyramid-shaped spire on Rincon Ridge when driving north on Tramway Boulevard in Albuquerque. Although it is unnamed, it presents a decent challenge to would-be ascensionists with minor route-finding, and a class 2/3 scramble up the northeast ridge. Despite its proximity to Albuquerque, the trail-less summit is often overlooked by its more famous and named neighbors. The main route to the summit is via the Piedra Lisa Trail #135 to Rincon Ridge and a bushwhack west for about a mile. 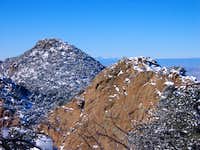 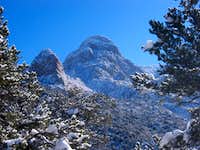 The Prow and the Needle from the Piedra Lisa Trail
Point 8300 towers over Rincon Ridge, the ridge that divides Cañon del Agua to the north and Juan Tabo Canyon to the south. The peak also presides over its lesser neighbors of the Rincon spur ridge to the west; Point 8201 and Rincon Peak (8163 feet). To the east towers the main mass of the Sandias with the 1000-foot wall of rock known as the Shield, the grand pyramid-shaped spectacle of the Needle, and the radio-tower covered summit of Sandia Peak itself. From the summit of Point 8300 one can see the Manzano Mountains, the Jemez Mountains, Mount Taylor, Cabezon Peak, and the Sierra Ladrones.

Looking East at the Sandias from Point 8300.
This area is famous for the trailhead of the La Luz Trail to the top of Sandia Peak, the Civilian Conservation Corps (CCC) Juan Tabo Cabin, the Juan Tabo Picnic Area, and the La Cueva Picnic Area. In addition to these, the Piedra Lisa Trail #135 travels from the parking area to a saddle on Rincon Ridge and down into Cañon del Agua, a less frequented part of the Sandia Mountains. The Piedra Lisa trail's intersection with Rincon Ridge is the starting point for hikes to Rincon Peak, Point 8300, and to the famous fourth-class Knife Edge of the Shield. Lower down on the Piedra Lisa trail are access points to the Movie Trail (a trail to where an old movie was once filmed) and the Waterfall Trail (which leads to a seasonal waterfall that is used as a beginning ice climb). 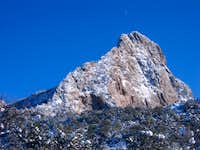 The Shield from the Piedra Lisa Trail
The flora and fauna of this mountain is much the same as the rest of the Sandias. Black Bear (Ursus americanus), Mountain Lion (Puma concolor), and Abert's Squirrels (Sciurus aberti) abound. Piñon Pine (Pinus edulis), Ponderosa Pine (Pinus ponderosa), Juniper, and Gambel's Oak (Quercus gambelii) are the predominant plants of the area.The Sandias are also well-known for their geologic uniqueness. First, there is an abundance of Sandia granite, a type of granite only found in this mountain range. Second, from the summit of Point 8300 and the saddle of Rincon Ridge, the Great Unconformity is clearly visible high on the escarpment of the Sandias. The Great Unconformity is an unusual gap in the geologic record where the Sandia granite meets its cap of fossil-rich limestone.

From I-25 north of I-40, head east on Tramway Blvd. past Sandia Casino for approximately 3 miles until you can make a left turn onto FR 333 to the La Luz Trailhead, and the Juan Tabo and La Cueva Picnic Grounds. Stay on the main paved road ignoring the turn-offs to La Cueva Picnic Grounds and the La Luz Trailhead. Immediately after the turn-off to the La Luz Trailhead, the road will become FR 333D and turn to dirt. About 1/2 mile further on is the parking lot with a turn off to the left. There is a gate (sometimes open and sometimes not) and a sign marking the no public access Evergreen Hills Subdivision, as well as the parking area for the Piedra Lisa #135 Trailhead. Parking is free.
The new trailhead does not require hiking down the road, but is located immediately across the dirt road from the parking lot.

There is no Red Tape for this climb.

Dispersed camping is allowed in the Sandias, but there are no designated campgrounds. Fires are not allowed. This hike is close enough to town that it is easy to stay with a friend or in a hotel.

The 7.5 USGS map is Sandia Crest (NM).The Cibola National Forest publishes the Sandia Mountain Wilderness Map available locally in Albuquerque at REI near the intersection of Montaño and I-25. It costs about $14.95 and is plasticized for weatherproofing. You can get it for $7 if you go directly to the Cibola National Forest Office off of Osuna. To get there from I-25 head west on Osuna. Take a right onto Chappell Drive. The office will be on the west side of the street in about 1/4 mile.Probably the best map to purchase is the newer Sandia Mountains – GPS Powered Trail Map by Dharma Maps. It is a 1:45,000 scale topographic map complete with 1:25,000 insets, mileages, and access points. It is printed on waterproof paper and is smaller, more detailed, and more portable than the National Forest map. It can be purchased at Amazon.com for $9.95, and is also available locally at REI near the intersection of Montaño and I-25.