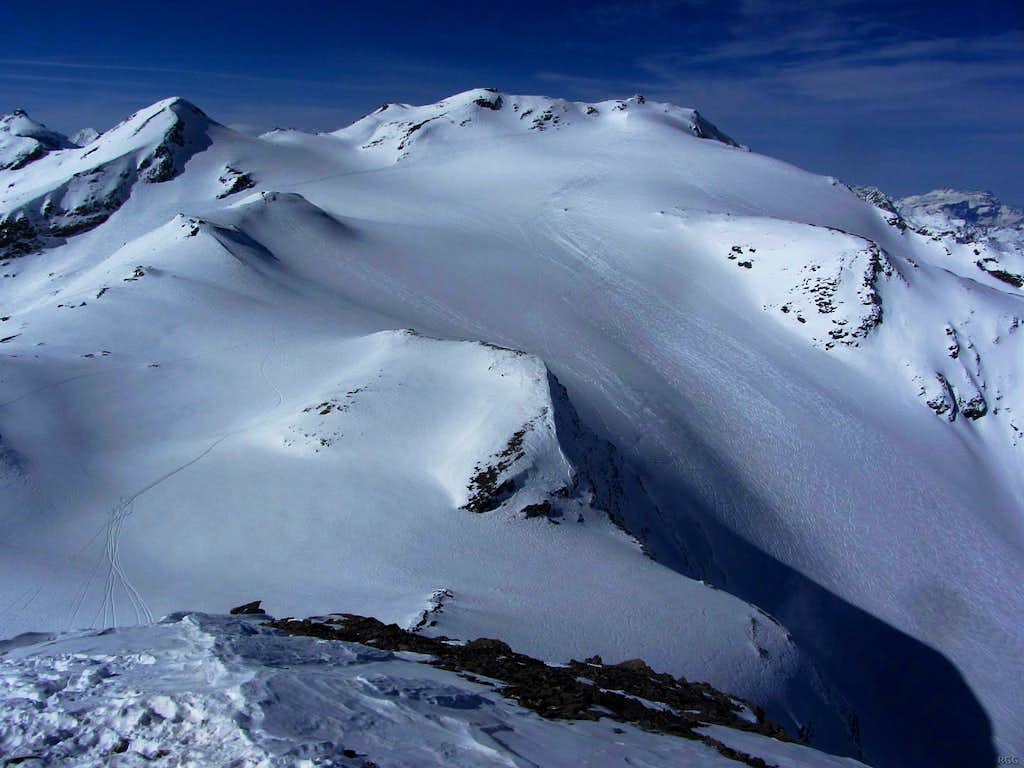 The main summit is just right of center, its slightly lower 3453 m southern subsidiary that seems to be higher is in the middle. To the left of the mountain is the Col Nord de Darbonneire (3364m) and still further left is Pointe de Darbonneire (3422m).
Pointe de Vouasson is a very easy peak to reach, with magnificent summit views. Two long ski routes back down to the valley make it very popular in late winter and in spring, and it is visited regularly in summer as well.

Mind you, when I say easy, I only mean from a technical point of view, for it does take some effort to get up there: from the most commonly used trailheads, La Gouille and Satarma, two tiny neighboring villages at around 1800 m in Val d'Arolla, it is almost 1700 m to the summit. Ski mountaineers normally do this as a day trip. On foot you might want to take an extra day and include an overnight stay at Cabana des Aiguilles Rouges (2810m), close to the normal route. 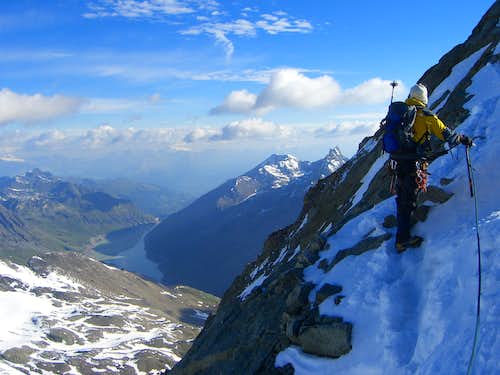 View from the south, high on Mont Blanc de Cheilon.

On the left is Lac des Dix. Right next to it is Pointe de Vouasson, and then the pointy Aiguilles Rouges d'Arolla.
While the eastern slopes are very gentle, the west face is pretty steep, dropping down 1100 m in about 1.5 km. At the bottom lies Lac des Dix, a big dammed lake at the head of the Val d'Héremence.

Several glaciers adorn the slopes of the mountain. To the east and northeast lies the Glacier de Vouasson with its very gentle upper slopes. A bit further down to the northeast it gets a bit steeper. To the north, in a steep couloir between the northwest and north ridges, lies the small Glacier de Merdéré. Both these glaciers reach almost all the way up to the summit. The tiny, almost vanished Glacier de Tsauderys on the other hand, located in a small bowl SW of the mountain, doesn't even come close. 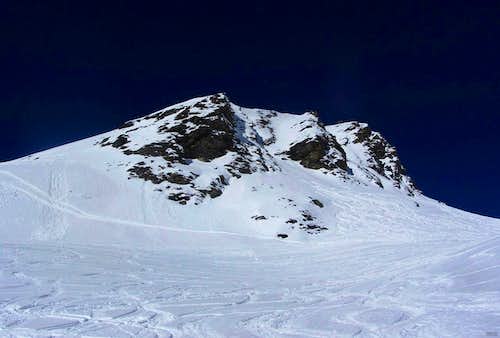 Pointe de Darbonneire from the east
The paddle points to Pointe de Vouasson.
In addition to the northwest and north ridges, a third short and gentle one stretches south. This ridge shows two very contrasting faces: sheer to the west, and almost flat to the east. After half a kilometer it reaches a minor subsidiary summit at 3453 m.

Two more ridges sprout from this point: A sharp one to the southwest and a gentle one to the east - but with a sheer south face. The east ridge soon leads to the Col Nord de Darbonneire (3364m) and then to the dome shaped Pointe de Darbonneire (3422m). From Pointe de Vouasson this dome doesn't look very impressive and it can be ascended easily (and, if there is snow, easily skied down as well), which I assume is precisely the reason that few bother to do so. From the east it looks a bit more like a proper mountain. 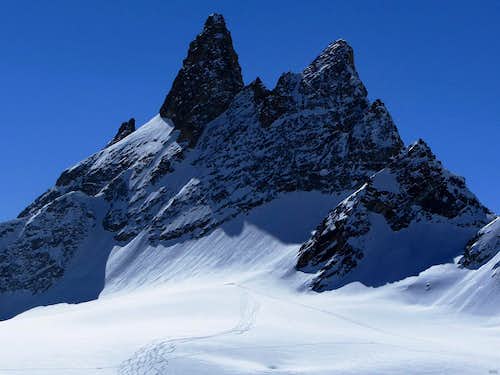 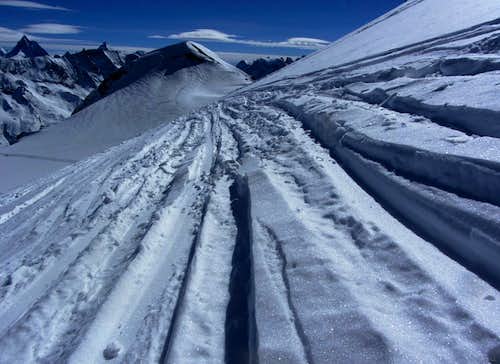 Ski tracks high on the mountain

Panorama from a few minutes below the summit of Pointe Vouasson, with a ski mountaineer standing on the south ridge.

On the right are the unmistakable dark contours of the Aiguilles Rouges d'Arolla. Behind the nearby ski mountaineer, with its summit slightly to his left, is the unimpressive dome of Pointe de Darbonneire. Further away, the skyline is defined by some of the most famous Swiss mountains.

With only one higher mountain nearby, the summit views are, to put it mildly, pretty good. On a clear day you can see many beautiful and famous Swiss mountains, as well as a number of French and Italian ones. If you are lucky, you might see some of these: 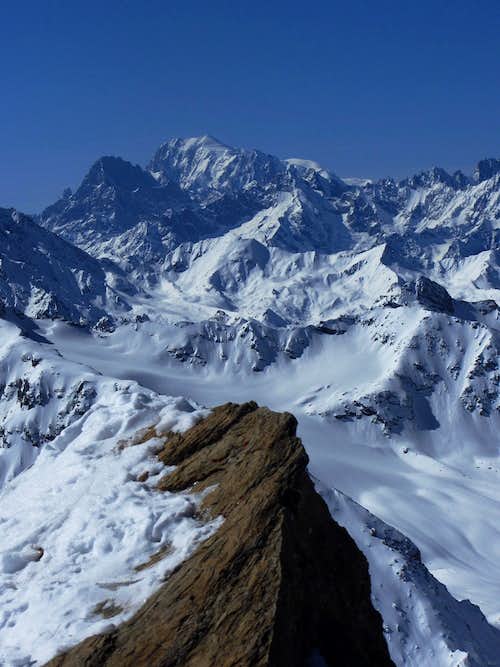 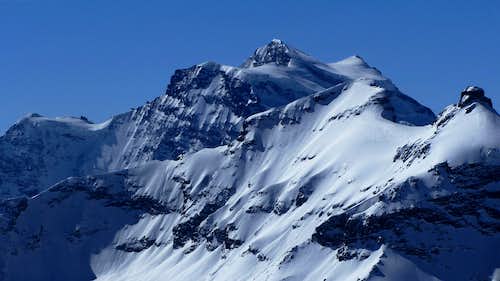 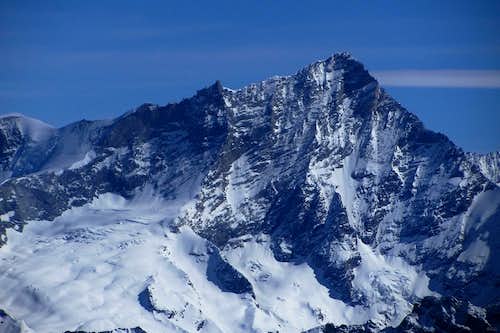 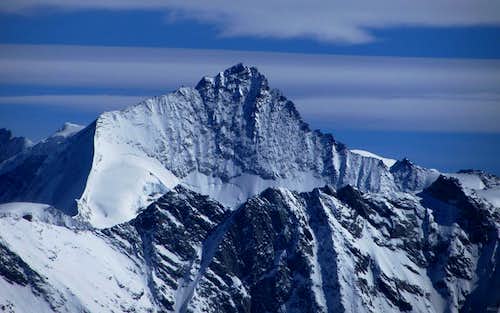 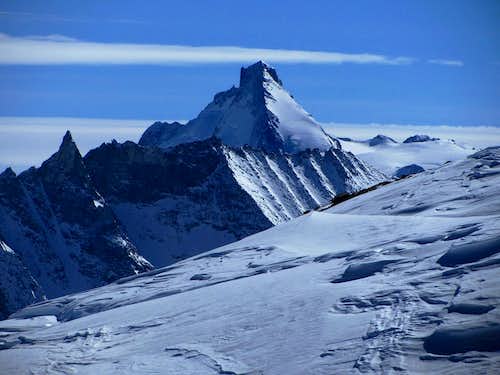 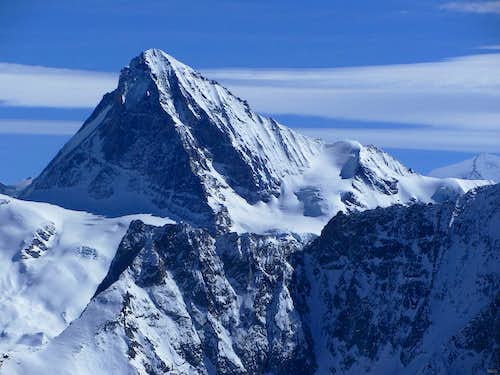 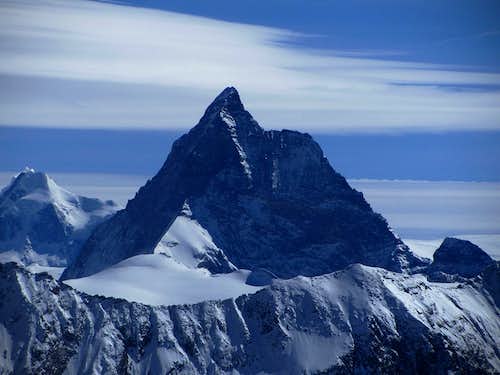 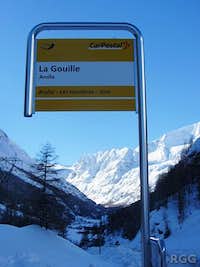 Bus stop at La Gouille, deep in the Arolla valley

Pointe Vouasson lies in the southwestern corner of Switzerland, in the French speaking half of the canton of Valais, district of Hérens. The only road access is from the north, by way of Val d'Hérens, a valley sprouting many branches. The district capital of Sion (491m) in the long Rhone valley lies at its entrance. Sion has a train station, and buses go deep into Val d'Hérens and its side valleys from there.

By car, Sion can be reached from east or west on the A9 in the Rhone valley. Coming from the south, from Italy, the nearest border crossing is the St Bernard tunnel, which connects the Italian Aosta valley to the Rhone valley at Martigny, about 30 km west of Sion. The only alternative route from the south is across the high Simplon pass, leading to Brig, 50 km east of Sion. Coming from the north, apart from traveling via Martigny or Brig, there is the additional option of the railway tunnel between Kandersteg and Goppenstein. Special roll on - roll off trains efficiently transport cars through the tunnel. 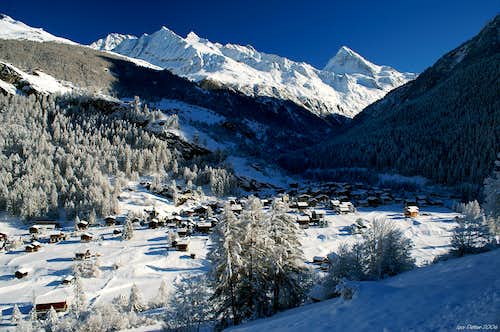 Getting to the Trailheads

Just 5 km into Val d'Hérens is the small village of Vex (940m). To get to the steep west side mountain, take the turnoff to Val d'Hérémence here. For most of the trailheads, stay on the main road deeper into Val d'Hérens.

Shortly past 20 km into the valley lies Evolène (1370m), on the east side of the river. On the opposite side is a ski area, and in winter Lana (1407m) is a useful trailhead, especially if the lift to La Meina (2142m) is operating; it can be used to shorten the ascent by a couple of hours.

About 25 km into the valley, at the end of Les Haudères (1450m), the valley splits in two smaller ones: on the left (i.e. east) Ferpècle, on the right (i.e. west) Val d'Arolla. The main trailheads for Pointe Vouasson are in the latter: first La Gouille and Satarma (both around 1800m) and at the end of the road Arolla (2000m) itself. Buses go all the way, even in winter. 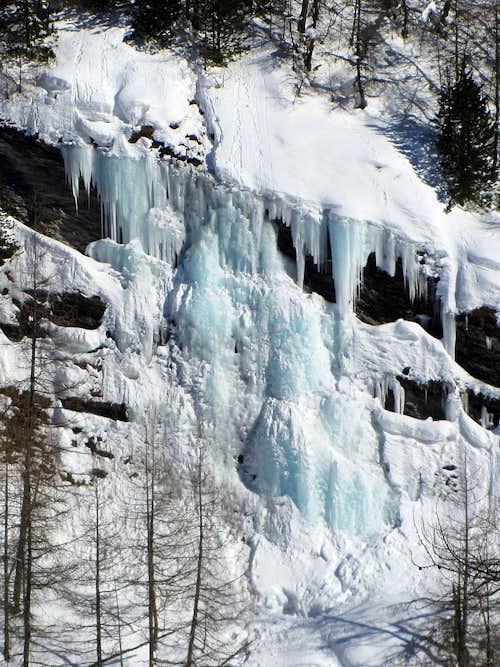 Right across the river from La Gouille is a collection of senic waterfalls, or, in winter, icefalls. This is just a small sample. 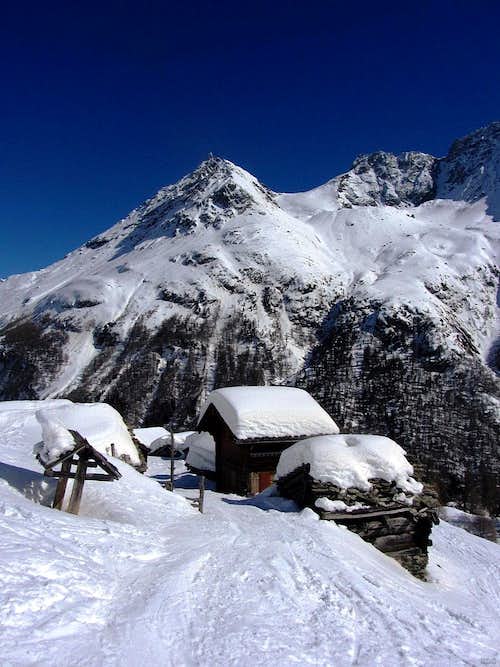 The hamlet of Louché, with the Dents de Veisivi in the background

The easiest route starts at La Gouille or Satarma (both ±1800m), two neighboring villages in Val d'Arolla, about 6 km east of the mountain.

From La Gouille, start out along the signposted trail to Lac Bleu. This is a popular destination in itself for those that want to hike for a couple of hours.

A few minutes before the small lake, the trail passes the hamlet of Louché. Past Lac Bleu, the trail gradually ascends further, until it reaches a relatively flat and wide valley. On the left, perched high on a cliff, sits Cabane des Aiguilles Rouges. 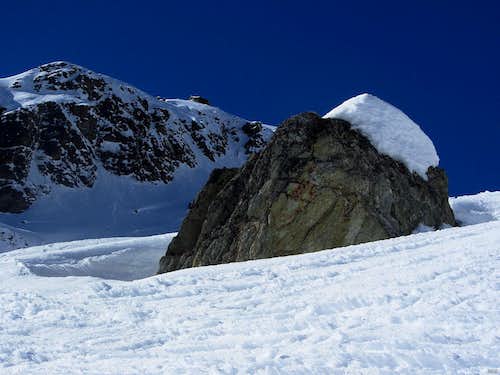 Looking up at Cabane des Aiguilles Rouges
Continuing up the wide valley, the trail leads towards Pointe de Darbonnaire and then turns slightly left, to a saddle just north of it, at the eastern edge of Glacier de Vouasson. This is the first time you can see Pointe de Vouasson, and the summit is already near, less than a kilometer away on the other side of the glacier. 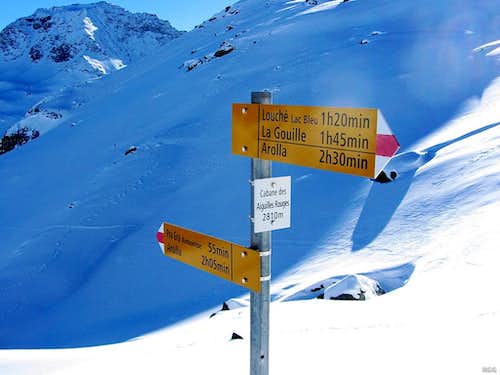 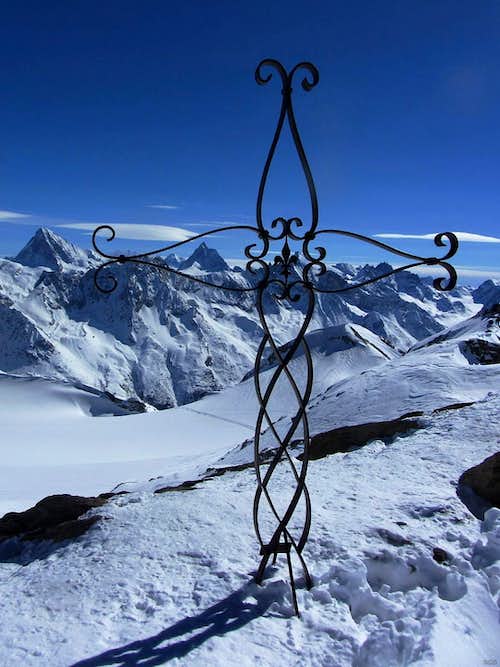 An alternative trailhead south of the mountain is at Arolla (±2000m). The trail passes directly by Cabane des Aiguilles Rouges, and is signposted. From the refuge, continue as when coming from the east. The trail from Arolla is slightly longer, but it starts a bit higher, it shouldn't take more time than from La Gouille. However, there are a few steeper sections on the trail. In summer that's not a problem, but in winter, depending on the snow conditions, this may present avalanche danger and this route isn't used often. 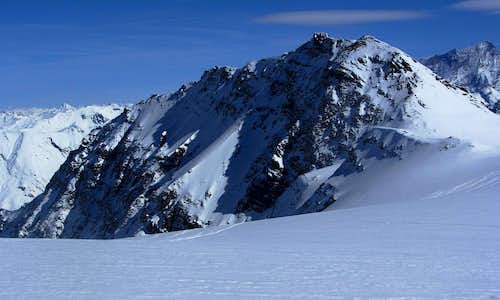 Another route starts at Lana (1407m). Either hike or, when it's operating, take the lift to La Meina (2142m). From there the route heads south by southwest, up the valley. The steepest part is around 2600 m. The edge of the Glacier de Vouasson is just below the 3000 m mark, below the sheer west face of Mont de l'Etoile (3370m).

In summer, this would be a very long route. In winter it won't be any shorter, but on skis the reward is a very long descent, all the way down to Lana, and high on the glacier I saw plenty of tracks heading that way.

There is a steep ski route down the Glacier de Merdéré, ending at Mayens de Méribé (1724m) in Val d'Hérémence, northwest of the mountain. 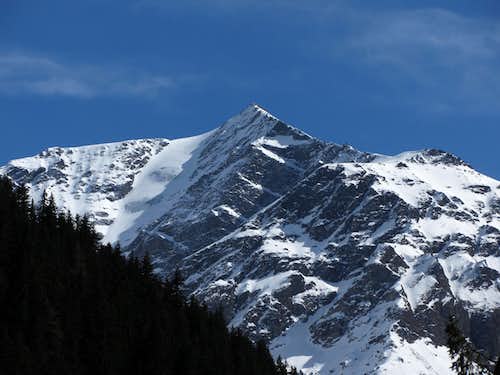 View from the north, with the steep Glacier de Merdéré on the left 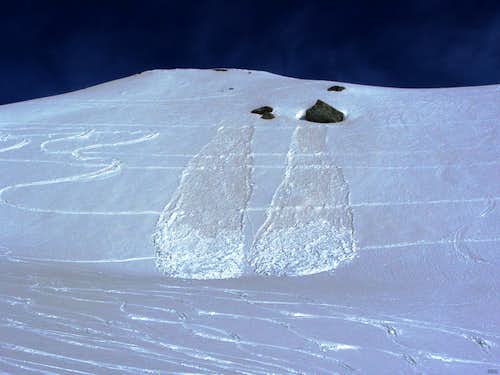 Debris from a small, recent avalanche next to the route
From the east, the mountain is accessible all year. In winter and spring, the avalanche risk is not to be taken lightly on some of the routes.

From Gouille/Satarma there are several variations to Cabane des Aiguilles Rouges. The safest is the northernmost one, from La Gouille via Louché and Lac Blanc, as doesn't cross or ascend any steep slopes, although it passes below a few small steepish ones. Some of the southern variations from Satarma pass steeper terrain and get closer to steeper slopes.

Depending on the avalanche situation, the route from Arolla to Cabane des Aiguilles Rouges may be less advisable, as it ascends a steep southeast facing slope not far before it reaches the refuge.

To the northeast, the section right below Glacier de Vouasson is steep enough for avalanches, if conditions are right.

And finally, the Merdéré Glacier to the north is really steep. 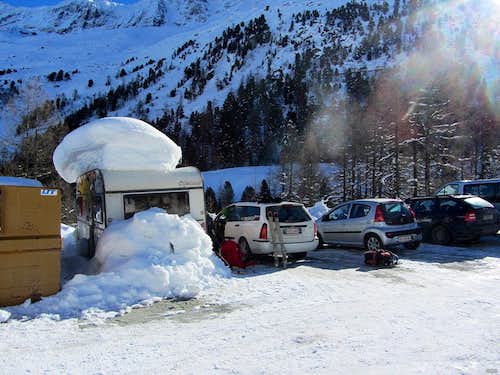 The whole area is dotted with ski resorts, including Arolla itself, with all types of accommodation options. Arolla even has a few small (and expensive) mini markets.

The excellent Swiss Topo maps are the best ones around.

1326 Rosablanca, 1:25 000, is the most detailed map. It covers the mountain as well as Canabe des Aiguilles Rouges, but as it only covers a relatively small area, La Gouille / Satarma, Arolla and Lana are all off the map.

283 Arolla, 1:50 000, or the 283S winter version with ski and snow shoe routes, is still detailed enough and covers a much larger area, making it more useful. 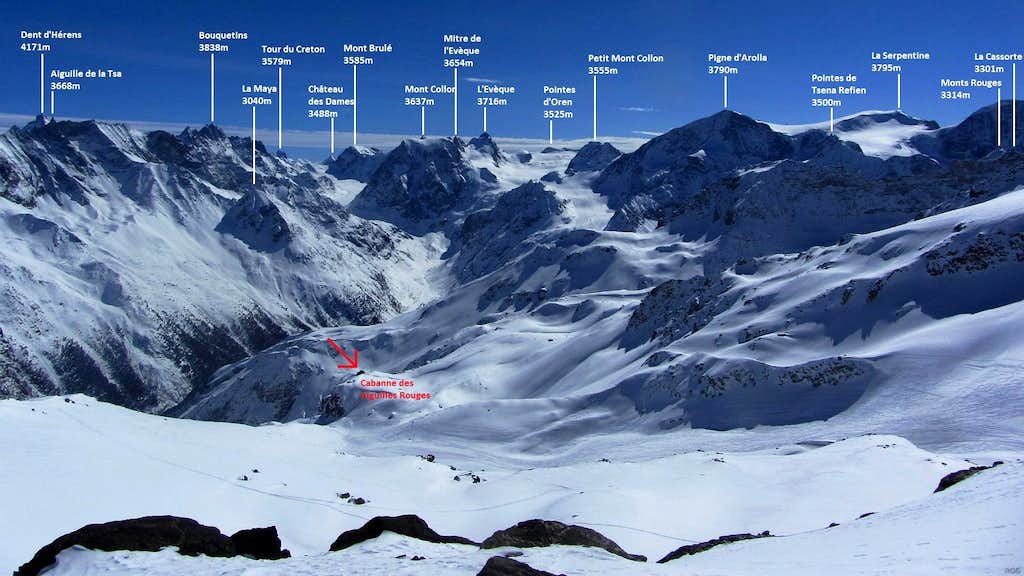