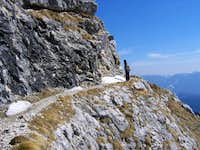 Above Pokljuka high plateau there's a mountain chain, which can be crossed by using a marked path, going from one to the other end. From this path also all summits can be ascended, but having these ambitions, you should have in mind that the ascents on some summits are not marked and that time to cross the whole chain is then much prolongued. On the NE part of the chain the path itself goes over many summits, but it is also worth ascending some of the highest summits which are standing in the SW part of the chain. Basically the route means getting from Vodnikov dom (hut), 1817 m, to Debela peč summit, 2014 m. Summits along the route: Tosc, 2275 m, Veliki Draški vrh, 2243 m, Ablanca, 2004 m, Mali Draški vrh, 2132 m, Viševnik, 2050 m, Veliki Selišnik, 1952 m, Debeli vrh, 1962 m, Lipanski vrh, 1965 m, Vrh Brda, 2008 m, Debela peč, 2014 m.

The tour can be done in one day, having in mind that you need half a day (previous or next) to reach Vodnikov dom (hut) or descend from it into the valley. If you ascend additional summits it can become a full two-day tour. The options are the following: 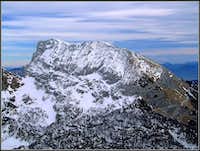 1.a. Tosc and Vodnikov dom

1.a. From the hut use the broad marked path, which goes almost horizontally around Tosc summit. It is easy, very panoramic, in summer you will meet there many hikers. Having passed the Tosc massif, you reach a grassy terrace (once it was an alpine pasture), after which the path descends a little and later in several turns ascends again on Studorski preval. 1 h 30 min. If you want to quit the tour, you can descend from below the grassy terrace by the marked path right to Uskovnica and further to Bohinj valley.

1.b. Just before reaching the grassy terrace, SE of Tosc, you can use the widest of grassy ravines and ascend by it the summit of Tosc. First you have steep grass, perhaps some weak trails in it, after reaching the summit plateau, you hike to its easternmost part, where the highest point is. 1 h up, 45 min down, not marked.

1.c. The shortest, but more demanding route to ascend Tosc is from Bohinjska vratca notch, 1973 m. From Vodnikov dom, you go in the opposite direction than by #1, in some 20 min you ascend the Bohinjska vratca, the famous pass into Krma valley. There you turn right and start climbing over steep rocky and grassy slopes. You choose the best passages, more or less near to the edge of the vertical northern wall of Tosc. Climbing difficulties are in the range of UIAA I. In 1 h (not marked) you reach the summit of Tosc, then descend by the route #2 and then proceed by the path #1 to Studorski preval.

2.c. Our main marked route continues from Studorski preval horizontally below the E slopes of Veliki Draški vrh, almost reaches the saddle between Veliki and Mali Draški vrh (Go to the saddle and look over abysses down in Krma valley!) and further over the SW slopes of Mali Draški vrh to Srenjski preval (saddle), 1959 m. The path over Mali Draški vrh slopes is on a few places narrow, exposed, secured with steel ropes. There's also a narrow wooden bridge, crossing a steep ravine. 1 h.

2.d. If you intend to climb the sharp Mali Draški vrh, 2132 m, anyway, you don't need to go to Srenjski preval and climb it from there. With some scrambling and easy climbing you can climb it by its W ridge. From the saddle between Veliki and Mali Draški vrh, proceed directly by the edge of walls above Krma valley. First you must ascend a steep grassy shoulder, on the summit ridge you have a few rock details to climb (UIAA I., II. or III). 1 h. From the summit of Mali Draški vrh you descend to Srenjski preval.

2.e. If you want to avoid steep slopes of Mali Draški vrh, you can from Studorski preval also descend by a marked path down to the beautiful Jezerce basin (1700 m) and on the other side of the valley ascend again to Srenjski preval. 1 h 30 min, an easy marked path. If you want to quit the tour, you can hike from Jezerce valley to Uskovnica or Rudno polje. 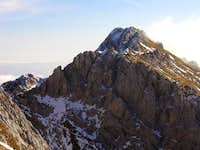 On Srenjski preval we shall leave the highest mountains of the chain. But before doing that, consider the option of ascending the two summits above the saddle.

3.a. Towards the south a rocky ridge goes to the summit of Viševnik, 2050 m. The first part requires some very easy climbing (UIAA, I-.), we avoid the hardest rocks more or less by SW slopes. 30 min, not marked.

3.b. Towards the north you can scramble up to the summit of Mali Draški vrh, 2132 m. The slopes are steep, require some care, just below the summit some easy rocks are awaiting us. 30 min, not marked.

3.c. Our main marked route again continues towards the NE. Now the world becomes more plateau-like. If we want to quit the crossing here we can from just below the saddle also turn right and descend by a marked path to Rudno polje. Continuing the tour, we soon reach the broad saddle between Veliki Selišnik (on the right), 1952 m, and the Point 1979 m on the left. We can ascend either of these summits by easy scrambling. From the saddle a broad valley, named Solnice opens below us. Now the path descends into it, we lose some 100 m of altitude. Reaching the lower part of Solnice our marked path approaches again the edge above Krma valley and ascends over broad grassy slopes to the SE ridge of Debeli vrh, 1962 m, from where the summit is just some 15 min away. If you want to quit the tour, you can turn in Solnice valley towards the east, than towards the south and hike through larch woods down to Pokljuka plateau (not marked). When you reach the forrest road, go right on Rudno polje or left to the parking place below Lipanca. The section from Srenjski preval to Debeli vrh will take us 1 h 30 min.

4.a. From Debeli vrh our marked path persistently continues below the main ridge. Being quite panoramic it leads us a bit down and up all the way to the shoulder of Lipanski vrh, 1965 m. After ascending its foresummit (or climbing over the notch the main summit), we return by its broad south slopes, until the path sinks down in forests, crossing them, and through a shallow valley descending down to meadows of Lipanca. There's a mountain hut, 1630 m, and two more private huts. 1 h 30 min, easy marked path.

From Lipanca we can descend down to Pokljuka plateau, but doing so, the crossing will not be complete. It's worth doing also the last section, which ascends to the nice panoramic summit of Debela peč, 2014 m.

5.a. From Lipanca the marked path leads us towards the north. Reaching the steep forrest it climbs on the upper terrace, then continues towards the left and soon reaches the main ridge above Krma valley. Now the path turns a little towards right, crosses the slopes of the easily reachable Vrh Brda, 2008 m, reaches the saddle below the summit of Debela peč and in a few minutes the panoramic summit itself. 1 h 30 min, easy marked path.

5.b. In case you did not descend from Lipanski vrh to the huts of Lipanca, you can also continue by the main ridge. From Lipanski vrh, you first scramble down (steep, unpleasant) to Lipanska vrata, 1898 m - a saddle on which the marked path from the north, from Krma comes. Now you follow the main ridge - first you need to climb a few rocky steps and find passages through dwarf pines, but soon you're out and just continue crossing the plateau near the main ridge. So you reach the path #5.a and by it the summit of Debela peč. From Lipanski vrh 1 h 15 min.

5.c. The final section is the descent from Lipanca down to Pokljuka plateau. You follow a good, broad marked path and reach the parking place on the forrest road in 30 min. Also direct descents from Debela peč to Pokljuka plateau are possible, but they are less convenient, leading far more towards the east.